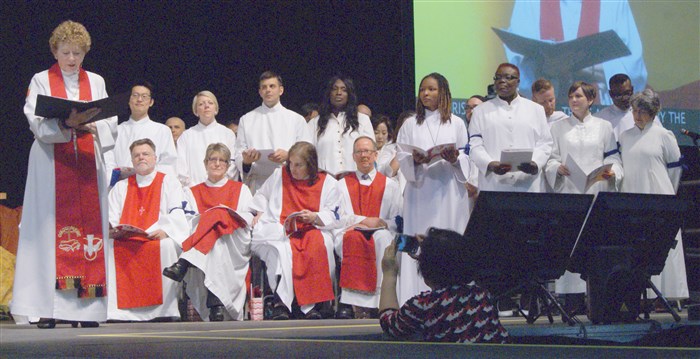 Bishop Jane Allen Middleton, left, examines the candidates for commissioning as elders and deacons during the 217th session of the New York Annual Conference at Hofstra University. Photos by Stephanie Parsons

The New York Annual Conference commissioned or ordained 27 individuals on June 11 at Hofstra University in what Bishop Jane Allen Middleton called an “historic ordination service.” Five others were recognized as licensed local pastors, and one was received as a full member of the conference.
Four of the candidates seeking commissioning or ordination had come out as gay in an open letter to the United Methodist Church just days before the 2016 General Conference last month. Rev. Elyse Ambrose and Rev. Lea Matthews were commissioned as provisional deacons, Rev. Bruce Lamb as a provisional elder, and Rev. Alex da Silva Souto was ordained as an elder in full connection. Kathleen Reynolds, who received a license as a local pastor, also signed the letter.
All 33 individuals were affirmed during the clergy session on June 8, where an associate clergy member raised questions about the work of the Board of Ordained Ministry and the eligibility of four of the candidates to be ordained or commissioned. A decision on a question of law was requested from Bishop Middleton. Middleton responded on June 10 that it would be improper for her as bishop to make any substantive decisions of law on the questions.
“The proceedings and procedures of the conference Board of Ordained Ministry are not subject to review by the powers and authorities granted to bishops by our church’s constitution,” she said in a statement. She added that her written response to the request for a decision of law would be issued and published on the New York Conference web site within the 30-day period allowed by the Book of Discipline.

Middleton, who was presiding over her last annual conference before returning to retirement, was visibly emotional as she introduced guest preacher, Bishop Minerva G. Carcaño, episcopal leader of the California-Pacific Conference, at the ordination service.

“She is a prophet who speaks truth to power,” said Middleton. “I see her as the conscience of the Council of Bishops.”
“What a joy it is to be with the mighty New York Conference,” Carcaño said as she began. “What a deep love your bishop has for you . . . Just as she stepped up to care for you, all of us should do likewise.”
Carcaño challenged the gathering to consider the opportunities that are lost to share God’s love when discrimination of any kind gets in the way.
“The UMC does go out into the world in the name of Jesus,” she said. “But today it’s not as clear as it could be . . . or as simple minded as it ought to be.”

“It’s a major issue whether LGBTQI people should be a part of the church, but it’s not the only issue,” Carcaño said. “Some people are not all that sure racial-ethnic people belong in the church either.”
Our discrimination may be thoughtless or unintentional, “but it is still deadly,” Carcaño said. “We don’t want things to change, even if that would make space for others. God forbid that someone who doesn’t look like us comes and takes our place, takes our pew, or our place at the table of the Lord.”
She admitted that she sometimes doubts if the UMC can really go out and follow the path of Jesus to make new disciples for the transformation of the world.
“But has faith not taught us that Jesus is God among us? We can go to the edge to doubt, but Jesus always pulls us back to the center. We can doubt ourselves but we should never doubt Jesus.

“Let us remember the joy of our salvation . . . let us go to all who hope and hurt,” Carcaño concluded.
Following the service, Rev. William Pfohl, chair of the conference Board of Ordained Ministry, said he was humbled by the proceedings.
“We asked the Lord of the harvest for fit, faithful and fruitful laborers for His fields. God sent them, and God will bring to completion the work that God has ordained.”
On May 3, Pfohl and Rev. Dr. Charles A. Parker, chair of BOOM in the Baltimore-Washington Conference, released a joint letter inviting other conferences to no longer consider sexual orientation when evaluating candidates.
Those recognized in the service in addition to Souto, Lamb, Ambrose, Matthews, and Reynolds were:
Licensed local pastors Patricia A. Chuppe, Parker H. Prout, Bonnie Jean Snyder, and Ross Topliff.
Provisional deacons Janet Lelieth Brown Cox and Maria Pia M. Seirup.