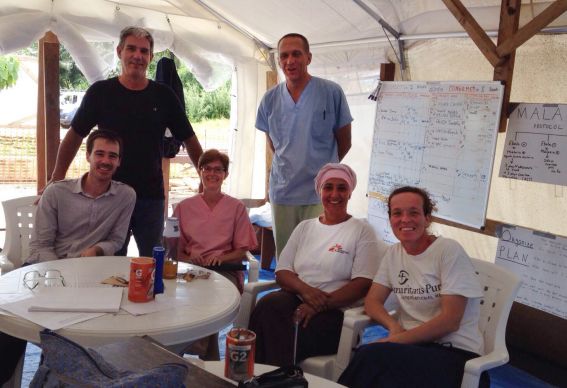 Dr. Vicki Morris (in pink scrubs third from left) waits with others in the nurses’ station case management center.

Dr. Vicki Morris just finished volunteering in one of the last places on earth anyone would want to be right now: an Ebola treatment center in rural Liberia.

Morris wasn’t ready to leave even though she knew the situation was getting dangerous.

Nurses, doctors save lives but lose their own

Morris, a member of Soapstone United Methodist Church in Raleigh, North Carolina, and an infectious disease specialist, was in Foya, Liberia, from July 5-Aug.1, working with Samaritan’s Purse. The nondenominational Christian organization runs a center close to the Guinea border where the Ebola outbreak started in May.

She planned to be there six weeks but was evacuated after only three weeks because of the beginning of civil unrest, which has led President Ellen Johnson Sirleaf to quarantine neighborhoods and impose a curfew.

Morris called Bishop Hope Morgan Ward after she returned to the U.S. In a video, the North Carolina bishop appealed to the church to give gifts to the United Methodist Committee on Relief to fight the Ebola outbreak.

Morris worked with Liberian doctors and nurses as well as other volunteers from Samaritan’s Purse.

Groups from the center went into the communities daily to educate people about Ebola and one group was attacked.

“They made it back with injuries but nothing serious,” she said. “After that it just seemed to unravel.”

The center had from 20 to 30 patients at the time she was evacuated.

“Every day we went in dressed up in the suits (protective equipment), there wasn’t a lot we could do but we could start IVs and give them medication. The only blood test we did was for Ebola and malaria.”

Those samples were sent to a laboratory in Guinea. She said she is still on the email list and gets notices when samples go out from Foya, so she knows cases are still coming in.

“On the day we left, 17 cases came in all at once from that district where the group was attacked.”

The nurses and health care professionals are still at the center, still treating patients, she said. “Samaritan’s Purse pulled out. The nurses could have run away but they didn’t, they stayed to take care of the patients.

“Lots of people tell me I am courageous but I look at those nurses and I think, ?You have a lot more guts and courage than I do.’”

Morris said the Ebola patients themselves helped care for each other, especially looking out for children who came to the center alone. Some of the children had parents who had died or were too sick to care for them. Some had healthy parents who had to stay outside of the center.

She agrees with Ken Isaacs, director of Samaritan’s Purse, who testified before Congress on Aug.7 that the reported cases of Ebola only represent 25 percent to 50 percent of the actual cases.

“There is a lot of paranoia and distrust and people are staying in the villages and dying,” she said. “Every day, I look at the news reports and talk to contacts I have there and the situation is much, much worse than what you are reading, especially the civil unrest.”

Morris said she is concerned about Liberia and feels some type of military response is needed as a humanitarian mission to at least get in supplies and provide security.

“It is beyond the capacity of the Liberian government or the Ministry of Health or even NGO’s like The United Methodist Church. There just aren’t enough public health people to respond.”

Morris is glad the attention of the world is on West Africa and this Ebola outbreak.

“Some of the things that bother me that I am reading are the focus seems to be on fear and concern that this will get into the United States and affect us. That’s a concern, but we should be sympathetic and wanting to help even if it doesn’t affect us.”

Morris said she was amazed by the people of Liberia. “They are not stupid or evil—I know you see a lot of things in the media that make you think otherwise, but they are just amazing people.”

She said many of Liberians think Ebola is God’s punishment. She said she told everyone she met, “God hears your prayers, God loves you.”

Morris said the experience changed her and she is still thinking and praying about what she is supposed to do next.

*Gilbert is a multimedia news reporter for United Methodist News Service. Contact her at (615) 742-5470 or newsdesk@umcom.org.

While malaria is curable, Ebola is not. There is real concern that fear will keep malaria patients from seeking treatment and deaths will rise. Getting...Read More

The precautions that protect against Ebola violate the cultural norms of West Africa. Read More

Communication is aid in Ebola fight

Misinformation and misunderstanding about Ebola abound, and communications plays a critical role in containing the disease, writes the Rev. Larry Hollon. Read More 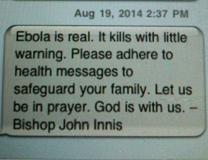 Larry Hollon explains how a history-making text message from Bishop John Innis in Liberia can reach people across broad distances and help save lives.Read More