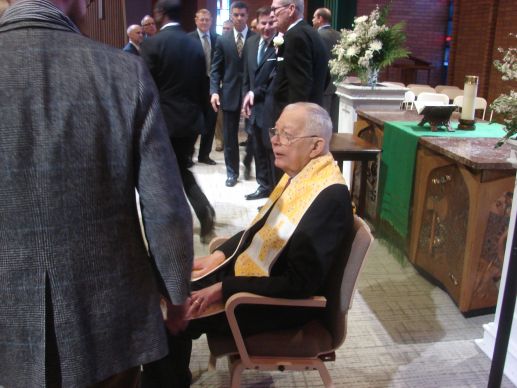 The Rev. William McElvaney rested on March 1, before performing the wedding of Jack Evans and George Harris, partners for 53 years and longtime members of Northaven United Methodist Church. The service was held at Dallas' Midway Hills Christian Church.

The Rev. William McElvaney, a retired United Methodist pastor and seminary president known for social justice advocacy, died Sunday Aug. 24, at his Dallas home. He was 86.

McElvaney had recently informed members of Northaven United Methodist Church, where he was pastor emeritus, that his liver cancer had spread and he was entering hospice care.

“We were all here,” Mason said. “Mom (Fran McElvaney) was with him most closely in the same room. She had stayed up all night with him, and she had just fallen asleep. Once she kind of rested, he did too.”

On March 1, McElvaney made news by defying church law to officiate at a same-sex wedding for two longtime Northaven members — Jack Evans and George Harris, partners for 53 years.

The action drew an official complaint, but Fran McElvaney said North Texas Annual (regional) Conference Bishop Michael McKee had relayed in a visit to her husband last week that the matter had been resolved.

McKee could not immediately be reached for comment. He attended Sunday morning worship at Northaven United Methodist Church as members were coping with news of McElvaney’s death and that of longtime member Bill Warrick.

“We were grateful to have him here,” said the Rev. Eric Folkerth, pastor of Northaven.

McElvaney grew up in Dallas, in a prosperous family whose name graces a building at SMU. He earned three degrees from the school, and credited Perkins with turning him in the direction of social justice.

He was a leader of the Dallas Peace Center and advocated on various social justice issues, including helping organize United Methodist opposition to having a public policy center as part of the George W. Bush Presidential Center at SMU.

His writings included the book “Becoming a Justice Seeking Congregation.”

McElvaney said his only regret about performing a same-sex wedding was that he hadn’t done so earlier.

“When institutional covenants supersede radical grace, the church is protecting its own prejudice and inoculates the church against love in favor of law,” he wrote in an essay titled “Reflections on The United Methodist Church’s Struggle to Become Inclusive.”

“Bill McElvaney was a tireless prophet and preacher for more than 50 years, and time and time again took bold stands to lift up those who were often most marginalized in our society,” Folkerth said.

Perkins named McElvaney a distinguished alumnus in 2013. On his retirement from Perkins, a decade earlier, friends of his established the William K. McElvaney Peace and Justice Award at SMU.

McElvaney willed his body to The University of Texas Southwestern Medical School. A memorial service will be held at Northaven, at a date to be determined, his wife said.

In writing Northaven members about the spread of his cancer, McElvaney said: “I believe I am in God’s hands as experienced throughout 86 years of amazing grace surrounding my life in countless ways, not the least through Fran’s superb loving care.”