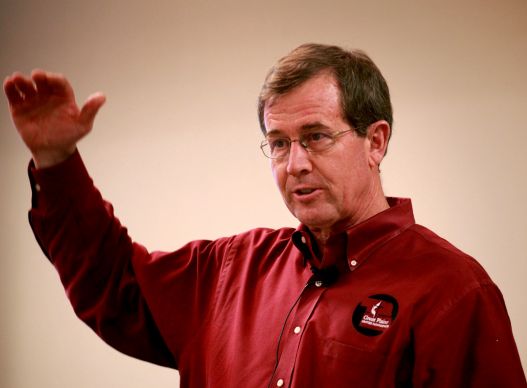 Bishop Scott Jones leads a discussion on the implications of the church’s sexuality debate at the board meeting of the General Council on Finance and Administration held in Nashville, Tenn.

The United Methodist Church’s intensifying debate around human sexuality has substantial financial implications in the global church, a bishop warned the denomination’s finance agency. Those costs could include a drop in church giving and the division of property.

“The question is: Is there a middle ground that will allow most of the traditionalists to stay and yet satisfy most of the progressives?” said Great Plains Area Bishop Scott Jones.

“I am not accountable to the Council of Bishops in any way whatsoever,” Jones told those gathered. “Let that sink in. I am accountable to my jurisdictional conference because that’s who elected me and that’s who can do something to me.

Jones noted that many United Methodists look to the Council of Bishops to discipline its own members. But as a matter of church law, he said, the council does not “have the right to impose significant penalties on its own members.”

In the case of Bishop Melvin G. Talbert, for example, the Council of Bishops at its November meeting recommended a complaint be filed against the retired bishop. But in a statement, the council indicated it could take no further action.

“I think one of the key problems in this whole debate is: Where is genuine leadership that can or will act?” Jones said.

Since spring, Jones has collected some of the proposals on the matter that could be heading to the 2016 General Conference.

On Aug. 21, he shared an overview of these proposals and their potential impact on church unity with a group that included the board and top staff of the General Council on Finance and Administration as well as top executives from other general agencies. He also shared his paper on the topic, “Finding a Way Through: Options for the UMC and Homosexuality.”

The Book of Discipline, the church’s book of polity and doctrine, since 1972 has stated that all people are of sacred worth but the practice of homosexuality is“incompatible with Christian teaching.”

General Conference, the church’s top lawmaking body that meets every four years, has consistently voted to keep the language and over the years has expanded on restrictions against “self-avowed practicing” gay clergy and same-gender unions.

But Jones, who is also a church historian, told those gathered that he thinks two developments are unsettling the equilibrium in the denomination’s debate.

Because of the bishops’ involvement, Jones said, “No longer can we live and ignore this issue or keep it at the periphery of our church life in the way that we have before.”

For now, a number of United Methodists are preparing legislation to be considered by the next General Conference aiming to settle the dispute in some way.

Among the options on the table are plans to:

These proposals all come from United Methodists in the United States, Jones said. About 30 percent of delegates to the 2016 General Conference will come from Africa, 5.8 percent from Europe and 4.6 from the Philippines.

Jones also noted that so far, the proposal for amicable separation has not gone into details about what an amicable division of general church assets might look like. The Methodist Church’s split over slavery in 1844 was not amicable from legal standpoint, ending up with a case before the U.S. Supreme Court.

A FORUM ON SEXUALITY AND CHURCH

The topic can be challenging for people of faith. Read a variety of first-person reflections, meant to help us understand one another better.

The Rev. Steve Wood, a GCFA board member and pastor of Mount Pisgah United Methodist Church in Johns Creek, Ga., agreed with Jones that the finance agency should think of the financial and legal ramifications of each of the proposals.

“Just because you get to a vote …doesn’t mean you are at the end,” Wood said. “There are lawsuits, there’s collateral work, there’s all kinds of implementation issues that have very real costs.”

Jones urged those gathered to talk to counterparts in the Episcopal Church, Presbyterian Church (USA) and the Evangelical Lutheran Church in America. Those denominations all have faced the departure of congregations and in some cases, whole regional bodies, after changing denominational policies on ordination and same-gender marriage.

Thinking about possible exit strategies that General Conference might approve is key, Jones said. He used the example of a departing Episcopal congregation in his area that offered to give up its building to the diocese and thus saddle the diocese with the property’s $2 million debt. Ultimately, the diocese and congregation came to an agreement, but Jones said he could imagine a similar scenario involving a United Methodist conference.

“As these proposals come through, GCFA has data and you have a legal department,” Jones said. “There are things you can do to serve to raise the conversation, not to choose among the proposals (that’s where neutrality comes in), but to serve so conversations don’t take place in a vacuum.”

“I was not aware that the issue existed to the extent that it did,” he said. “What he laid out, I think we should continue to discern. I don’t think we should do anything rash.”