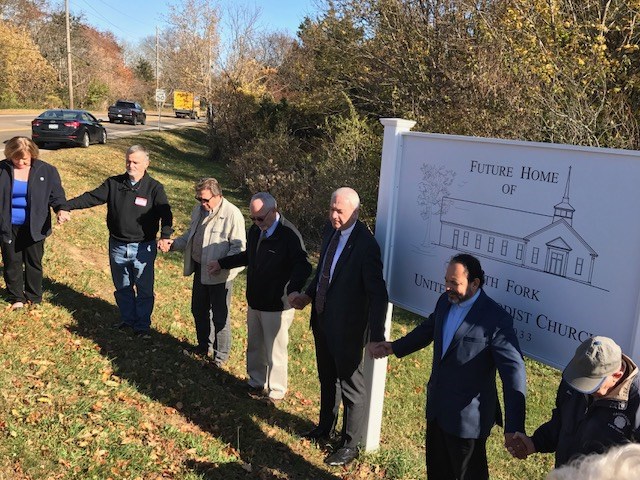 Bishop Thomas Bickerton prays with Long Island Easter clergy on the site where a new home for North Fork UMC will be built in Southold, N.Y. Pastor Thomas MacLeod, pastor of the merged church, stands to the bishop's right. PHOTO BY JULIA YH YIM

When Thomas MacLeod was a member of the Cutchogue United Methodist Church, he worked as a carpenter and contractor. Now, in his second career as a pastor, he’ll soon be overseeing the construction of the new home of the North Fork UMC, a merger of the churches in Cutchogue, Southold, Greenport and Orient.

While the blending of the four struggling congregations has not been without issues, MacLeod said, it came about because the churches refused to accept their demise.

“They still want to share the message of Jesus Christ in their communities,” he said. “They’re excited about what’s going on. It’s changed the way they talk about church, ministry and community.” The current focus is on building fellowship, with members from three of the four congregations now worshipping together in the Cutchogue church. The four communities encompass more than half of the 30-mile North Fork that stretches out along the Long Island Sound.

The church hopes to get approval from the Southhold Planning Board in May so that they can take the next steps for the new facility on 2.45 acres at the intersection of Horton Lane and County Road 48. The site was purchased in May 2016 for $775,000. MacLeod hopes to break ground by mid-fall. That timeline all depends on getting the further approval of the town and the Long Island East District as needed.

MacLeod credits his predecessors in the churches – Lorraine DeArmitt, Paul Smith and Jin Kim – with laying the critical and prayerful groundwork for the mergers. He noted that he was initially appointed to Cutchogue and Southold to “do the plan that had already been set in motion.” A previous plan for the congregations to consider combined ministries was put forth by the conference in the 1980s, but quickly died because of a lack of interest from the churches.

“These churches are older than the [New York] conference,” MacLeod said. “Any change in rural ministry like this has to come from within.”

And eventually they did embrace the possibilities. In 2014, after two years of active conversation, Southold and Cutchogue merged to create North Fork UMC. Greenport UMC then joined the merger in July 2015, and Orient a year later.

Orient came on board after discussions with the congregation and community about the benefits of merging the church rather than closing it. The merger would allow any proceeds from the sale of the property to be retained locally for ministry; if closed, the use of most of the funds would be determined by the New York Conference.

MacLeod has been impressed by the maturity of faith he has found in the church members.

“They’re already moving to the next level to do everything that they can to make this work,” he said. “They’ve put personalities aside to work for the common good . . . it’s a very mature body of Christ.”

Under the guidance of the conference and the district, both the Southold and Cutchogue buildings were put on the market in fall 2014, and the Greenport property in September 2015. Despite the age and condition of the structures, there was hope that the potential sales – amid a rising real estate market on Long Island’s East End – would provide the resources necessary to build a new church.

In late July 2015, the Southold church was sold for just over $1 million. That sale allowed the church to hire a much-needed administrative assistant for MacLeod. They were also able to “come off of life support,” MacLeod said. “No more equitable compensation. We’re paying our apportionments and our bills. We hope to ride that excitement into the new building.”

Much of the community response has been positive, MacLeod said, but notes that there are those who are concerned about historic structures being changed into something new. The former Southhold church building, its façade intact, is being used as an opera house, where both lessons and performances are offered.

In January of this year, the family that has rented the Orient parsonage for more than 10 years was able to purchase the home for $367,000. Since the time of the merger, North Fork UMC has been in discussions with several Orient community groups who may come together to purchase the church for museum space.

On February 9, the NFUMC trustees sold the Greenport property for $950,000.

The new church building will have all the assets a church of the 21st century needs, according to MacLeod. That includes a one-level, barrier free space with a low carbon footprint. The interior plans for the 7,600-square-foot building call for a sanctuary to seat 144 people, two offices, a nursery space and two classrooms, an open kitchen and a function room, and two accessible bathrooms. A temporary disaster shelter will include space for a shower and washer and dryer. Outside plans include solar panels on the roof and a 48-car parking lot on the site that backs up to Peconic Land Trust property.

One key goal of the merger is to continue to have or to create a ministry presence in each of the communities. One of the food pantries formerly housed in the church has moved into a storefront in the community.

“We’re worshiping with 60 souls now, but we’re anticipating growth in our new location,” MacLeod said. “We’re getting excited about new ministries that can pop up in the community. People have caught fire about going to the community – and then maybe we can move people to church.”

One unexpected benefit of the merger has come in giving away things that the churches were holding onto. Flatware from Southold was given to a shelter for veterans, and other items have been donated to the Community Action Southold Town. While MacLeod laughed about needing multiple dumpsters to clean out the churches, he also noted that the “shedding of things has been a blessing.”

An associate member of the NYAC, MacLeod is no stranger to constructing new churches. While serving in Sag Harbor, N.Y., MacLeod led the congregation through the discernment process of selling their old structure and building a smaller, energy-efficient church, which held its first services in October 2011. In December 2016, the LIE District suspended worship at the church to reassess the ministry potential in the community.

So You’re Thinking About a Merger?
Pastor Tom MacLeod offers some helpful tips: