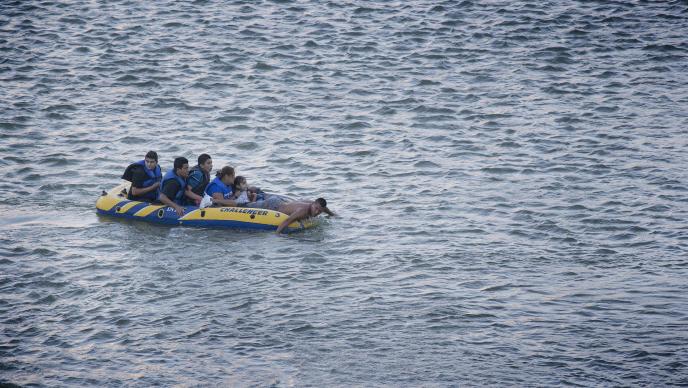 A coyote, or smuggler, (right) uses his hands to paddle a rubber raft full of immigrants across the Rio Grande from Mexico to the U.S. side of the river in Roma, Texas. Photo by Mike DuBose, UMNS. 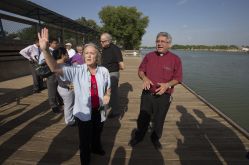 She joked and prayed with them in Spanish, and gently drew them out about the month-long journey they had made from Honduras to Texas.

Southern Mexico was the toughest place, Gonsales said. He spoke of getting separated from his daughters and beaten by men demanding money. He started to pull down his shirt to show the wounds, then stopped.

“What’s behind stays behind,” he said through a translator.

The often abstract issue of immigration turned into vivid reality for Carcaño and about two dozen other United Methodists leaders as they visited the Rio Grande Valley last week.

Their fact-finding and strategizing meeting, underwritten by the United Methodist Committee on Relief, United Methodist Women, and the United Methodist Board of Global Ministries, was prompted by the tens of thousands of families and unaccompanied minors from Honduras, Guatemala and El Salvador who have crossed Mexico and into the United States this year – mostly in Southern Texas, along the Rio Grande River.

Experts say the surge owes to increased violence and persistent poverty in Central America, and to a2008 anti-trafficking law passed overwhelmingly by Congress, allowing children coming from those three countries at least a chance of getting to stay legally.

Of late, the numbers have dropped sharply, as has news coverage. It could be a lull, owing to disrupted train service in Mexico, to the extreme late summer heat, or both.

Read the UMNS series on the border crisis.

Find more resources and stories about the church's response to immigration.

But people are still coming across. A United Methodist News Service reporter and photographer made a random, late afternoon stop on Aug. 19 at Roma, Texas, and saw a raft full of immigrants cross the Rio Grande, then run down a dirt road on the U.S. side.

Carcaño — a Rio Grande Valley native and organizer of the border gathering — believes the urgency for the denomination on immigration issues remains.

“My hope is that we as United Methodists will continue to learn about this opportunity of ministry that Jesus is calling us to, that we would strategize a national and regional plan for how we can respond,” said Carcaño, leader of the California-Pacific Annual (regional) Conference.

So to the border, she and other United Methodists came. 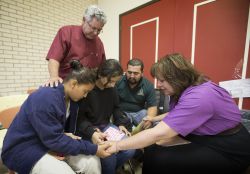 After a Sunday panel discussion with local United Methodists and others involved in responding to the summer’s border crisis, the delegation set out early the next morning.

The caravan stopped first at Anzalduas Park by a narrow bend in the Rio Grande River where, usually at night, people cross in overloaded rafts to the United States.

He noted that, unlike Mexicans who face immediate deportation if caught, unaccompanied minors coming from Honduras, Guatemala and El Salvador have the promise of an immigration hearing under the 2008 law, and tend to surrender themselves to the Border Patrol.

“They walk toward the shining light,” he said.

Leyva and Susan Hellums, a longtime United Methodist relief worker in the Rio Grande Valley, told the group that some families making the journey are actually middle-class Central Americans in despair of increasing drug cartel- and gang-related violence in their countries.

Leyva said some sell everything – paying, on average $5,000 to $7,000 – for the cost of travel and escort by generally unscrupulous “coyotes.”

After a question-and-answer period, the Rev. Jorge Luiz Domingues of the United Methodist Board of Global Ministries led the delegation in prayer, asking God to “help us that our hearts will be open to you and to the love of all people, especially those who are suffering and those who are in need, the migrants who are coming our way.”

The chorus of amens had to compete with the rising whine of engines. 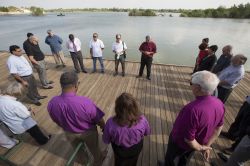 A delegation of United Methodist and other church leaders prays together on the U.S. shore of the Rio Grande at Anzalduas Park in Mission, Texas, directly across the border from Reynosa, Mexico. The group is holding a strategy meeting to learn more about the border crisis and improve the United Methodist response.  Photo by Mike DuBose, UMNS.

The group’s tour would include stops at the McAllen bus station, a departure point for immigrants released after initial detention, and the Food Bank of the Rio Grande Valley, where United Methodists and many others have volunteered and made donations.

Probably the tour’s high point was Sacred Heart Catholic Church in downtown McAllen, the local center of interfaith humanitarian relief effort for the surge of immigrants.

There, Carcaño met not only with the Honduran family but also with a young mother who had traveled from Guatemala with her 5-year-old son.

As Carcaño visited with the immigrant families, others in the delegation toured the Sacred Heart-based relief effort. They marveled at two staff members supervising a team of volunteers — everyone from Texas Baptists to yarmulke-wearing Jews — who helped immigrants get showers, clothing and food, and make phone calls.

“That thing down there at Sacred Heart is amazing,” Dorff would say later. “It runs like a machine.”

If there was a tour low point, it was a new federal processing center where unaccompanied minors are held.

A few weeks before, Dorff and others had, at the peak of the influx, visited a holding facility badly overcrowded with just-arrived youths, exhausted and dirty. He and others struggled to give words to what they’d seen.

Since then, the Border Patrol has remade an old seat-belt manufacturing facility into a new, spacious processing center. During the United Methodists’ visit, workmen were still putting benches into place. The roomier space, plus dropping numbers — the facility is handling about 40 a day, compared to 300 at one point this summer — has made for a situation that Dorff pronounced dramatically improved.

But the interior of the new facility is full of metal fencing, beyond which the group could see young children at play. The Border Patrol officer who led the tour acknowledged that the bright lights burn all night. Even brief pastoral visits with the minors are, for security reasons, extremely limited.

Galvan said he trusted reports of improvement, but still had concerns.

“The feeling you get inside is that you’re in a prison,” he said. 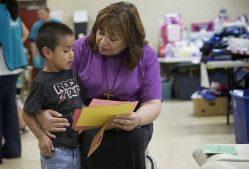 United Methodist Bishop Minerva Carcaño (right) shares letters of encouragement with Regino Enrique at the immigrant welcome center at Sacred Heart Catholic Church in McAllen, Texas. The 5-year-old and his mother, Macaria, who did not share their last names, arrived from Guatemala after a month-long journey. Photo by Mike DuBose, UMNS.

Delegation members returned to First United Methodist Church in McAllen on Monday night and Tuesday for discussion of what they’d seen, and for sharing information about United Methodist humanitarian and advocacy efforts.

The Rev. Laura Merrill, superintendent of the Southwest Texas Conference’s McCallen District, spoke about the ongoing need for volunteer groups and monetary donations.

“Please don’t bring us any more old clothes,” Merrill said. “If you’re bringing us new stuff, we’re going to find a place for that.”

On Tuesday, the delegation members broke into small discussion groups. One looked at coordinating and bolstering United Methodist response to immigration issues right at the border. Another considered how to do that across the United States. Others focused on renewing the denomination’s advocacy for immigration reform and on coordinating Methodist efforts in the United States with those in Mexico and Central America.

Those groups agreed to stay in touch by phone and email, and report with recommendations that will inform discussion at a Sept. 29-Oct. 1 meeting in El Paso, Texas, of the United Methodist Immigration Task Force and Methodist Border Mission Network.

For Carcaño, the Texas border tour had represented a specific and poignant homecoming. Anzalduas Park is where she came long ago with other United Methodist youth to celebrate completion of their confirmation class studies.

“To have been at that park when I was 11, talking about what it meant to take the steps to become a full disciple of Jesus Christ, and now to come back when I’m 60 and to be at the same park, thinking about what discipleship means in the light of the immigration situation … is really quite amazing,” she said.

Next: In Laredo, Texas, a United Methodist Women-supported community center finds new purpose as a welcome center for immigrants.