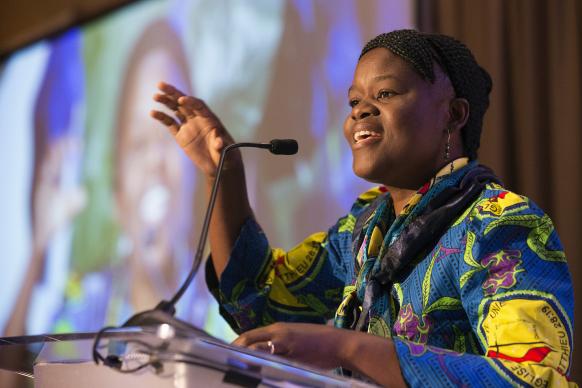 The Rev. Betty Kazadi Musau of the Democratic Republic of Congo gives the sermon during opening worship at the Game Changers Summit at the Opryland Hotel in Nashville, Tenn.

A mobile phone won’t save a baby’s life, but a phone call could connect a doctor with a mother having a difficult delivery.

A solar computer can’t put food on a table, but it can give someone an education that will lead to a living wage.

Mobile banking won’t keep a husband from beating his wife and taking her cash, but she will still have money at the end of the day — even if he smashes her mobile phone.

Suddenly technology — mobile phones, solar computers and digital development — starts looking a lot more like life-changing tools instead of like gadgets for the affluent or devices for social media. There’s a name for this field, ICT4D, which stands for information and communications technology for development.

“At its core, ICT4D is about connecting humans to one another. Talking to someone on a cell phone is a magical experience, and I want everyone to have that,” said Wayan Vota, co-founder of Kurante and one of the speakers at the Game Changers Summit, a conference hosted by United Methodist Communications. More than 240 people from nine countries are attending the Sept. 3-5 conference.

ICT4D is front and center at this conference, which focuses on devices that work on the ground in places where there is no electricity, no running water, no Internet connection and no money in an average household budget.

For three days, some of the leading innovators in technology for education, medical needs and global economy are sharing their success stories with United Methodist leaders who want to become game changers.

The Rev. Betty Kazadi Musau, a United Methodist clergywoman from the Democratic Republic of Congo and a public health care worker, said technology that makes sense for the people who need it makes all the difference.

“Before I help someone, I need to identify their need,” said Musau during a panel on using mobile technology for health. Musau pointed out the harsh reality for many in Africa: “We only have 10 doctors (in the North Katanga Conference of Democratic Republic of Congo).”

A timely text message is life-saving.

Musau said that during the cholera outbreak last February, messages sent through Frontline SMS, a free text-messaging system that does not depend on Internet connection, stopped unnecessary deaths. “A woman told me (that) messages to the villages to wash their hands before breast-feeding and before handling food worked to save lives,” she said.

A voice and a vision

“Mobile money puts power in the hands of women, and control of finances is amazingly empowering. I had a woman tell me, ‘My husband used to beat me and take my money. Now he can smash the phone, but the joke is on him because the money is still there.’ ”

“The human spirit flourishes when people are empowered to share in constructive ways with others. It flowers less when it is the subject of charity.”

“Don’t send old clothes and old computers. They don’t need our castoffs. Identify the needs and issues of a community and fund those issues,” he said.

Technology in the 21st century is what oil was to the 20th century, Locke said.