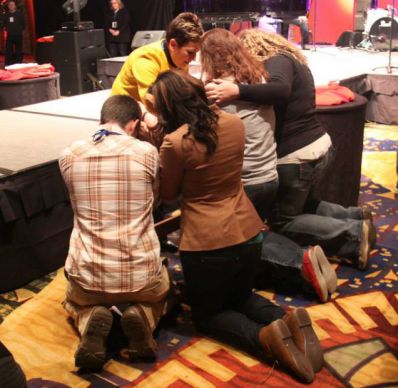 Photo by Vicki Brown for the General Board of Higher Education

Bishop Cynthia Fierro Harvey prays with young adults who were attending Exploration 2013, an event for those considering God’s call to ordained ministry in The United Methodist Church.

The graying of The United Methodist Church’s clergy ranks continues, with the median age of active elders reaching an all-time high of 56, the Lewis Center for Church Leadership found in its annual study of clergy age trends.

The just-released report also shows that active elders between ages 55 and 72 constitute a record high 55 percent of  the active elders pool, while the share  of active middle-aged elders (ages 35 to 54) continues to drop.

The percentage of young clergy is up, albeit modestly. Certain conferences and jurisdictions have seen good gains in that area, said the Rev. Lovett Weems Jr., Lewis Center director.

The 2014 study confirms that The United Methodist Church is increasingly dependent on licensed local pastors.

The Lewis Center has long tracked United Methodist clergy age trends, using United Methodist Board of Pension and Health Benefits statistics, and including both ordained elders and deacons and those on the elder or deacon track.

Weems said the factors for such a dramatic drop were several, including the length and cost of seminary education, the length of the ordination process, and the decline of church-going overall, which has caused fewer young people to grow up considering a Christian vocation.

But he said the denomination understands that its future is tied to its ability to cultivate young leaders and has been on the case, as evidenced by the Young Clergy Initiative and various conference efforts.

“The United Methodist Church is more aware and is addressing (the young clergy shortage) in ways that I don’t see happening in other mainline churches, although every mainline church has the same patterns,” Weems said.

The new study notes that the number of young United Methodist elders reached a historic low in 2005 and has climbed by nearly 100, or about 12 percent, since then. The overall numbers dipped slightly this year, but the percentage actually increased, due to an overall smaller pool of elders. The pool of deacons is much smaller still, but the percentage of under-35 deacons remained at 9 percent.

Women make up 39 percent of young clergy, and over three-quarters of young deacons are female, the study found.

The Texas Annual (regional) Conference, led by Bishop Janice Riggle Huie, has made cultivating young elders a priority, to the point of considering (and ultimately backing away from) officially discouraging those over age 45 from becoming candidates for ordained ministry.

The Lewis Center’s latest study found that the Texas Conference led all U.S. conferences with just over 10 percent of clergy under age 35.

The conference formed a task force on the young clergy issue in 2006, and has employed various strategies, including a focus on making “good first appointments,” said the Rev. Gary George, administrative assistant to Bishop John Hopkins.

George noted that Hopkins also sent a signal by having the Rev. Janelle Kurtz, 26, preach at this year’s annual conference. She did so two days after having been ordained as an elder.

Kurtz, who leads Brimfeld Faith United Methodist Church in Kent, Ohio, agrees that her conference has been investing effectively in young clergy. She feels it’s important to be strong across the age groups.

“That gives a fuller representation of the community of God as well as how God is working in different ways in people’s lives,” Kurtz said.

Whatever the shifts among age groups, The United Methodist Church has, overall, some 6,000 fewer active elders now than in 1990, the Lewis Center study shows.

Meanwhile — even as the denomination has seen decades of membership decline — the number of local pastors has grown by nearly 3,500.

The denomination had five elders for every one local pastor in 1990. Today, the ratio is close to two to one.

He added that the explanation lies, at least in part, in the increasing number of congregations whose dwindling membership and attendance leaves them with financial constraints.

“I do think that the declining numbers of churches able to afford a fulltime pastor is a key indicator that we need to be attuned to,” he said.