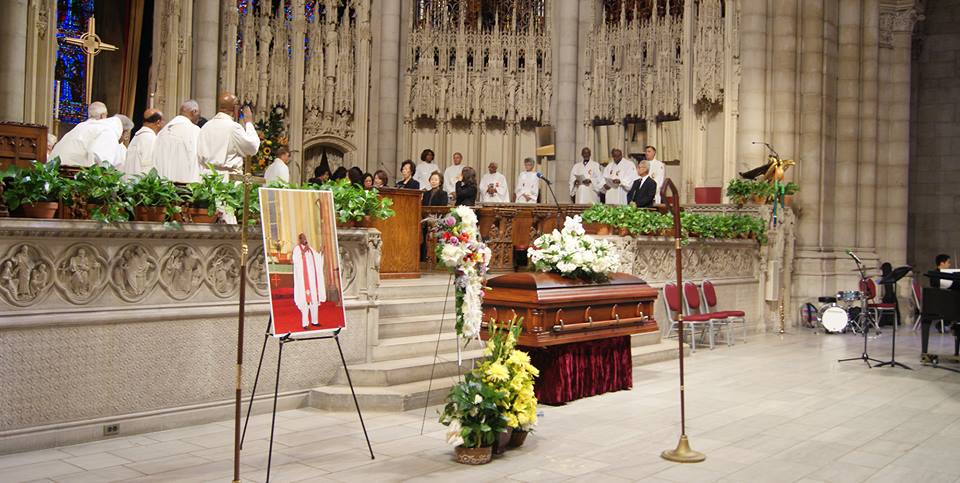 From the opening notes of “Ave Maria” to the ending refrain of “Draw the Circle Wide,” the funeral service for Bishop Martin D. McLee at The Riverside Church reflected the life and ministry passions of this beloved leader. The mix of music, dance, and word at the September 15 service might even have qualified for McLee’s definition of “engaging worship” – something he encouraged in all the congregations under his leadership.

McLee, the resident bishop of the New York Area, was remembered time and again for his complete commitment to the Gospel and his advocacy for the marginalized. He died unexpectedly on September 6, just four days before his 59th birthday. McLee had taken a six-month leave of absence beginning July 1, to receive treatment for an undisclosed illness. The news of his death was met with profound disbelief and an outpouring of adoration not only from the New York Conference, but also from many across the globe.

Thousands of mourners – including dozens of active and retired bishops and more than 400 robed clergypersons – poured into Riverside Church to pay homage to a man whose great love of Christ was a beacon for many. As the strains of “Jesu, Joy of Man’s Desiring” filled the church, the casket bearing the body of McLee was carried down the center aisle, with a group of children, young adults and mothers with babies close behind. His family, the bishops, the New York cabinet and lay leaders, and other ecumenical religious leaders then followed.

Bishop Marcus Matthews, president of the Northeastern Jurisdiction’s College of Bishops, addressed the feelings of shock and love when he opened the service by acknowledging that he too had a “broken heart” and that our corporate pain came in “bidding too early a farewell” to our beloved colleague, and to the man that the family lovingly called, “Martin Duke.”

Matthews noted that while it was difficult to rejoice, the gathering could take comfort in the love and grace of God that McLee had shared with each one. Matthews had consecrated McLee as a bishop just two years ago in July 2012. Matthews offered greetings in place of interim Bishop Neil Irons, who was reported to be too ill to attend.

The congregation rose to sing, “A Mighty Fortress is Our God,” after which Renata Smith, conference lay leader and Episcopacy Committee member, led the responsive reading of Psalm 23.

Retired Bishop Alfred Johnson, who is also lead pastor at the Church of the Village, offered a pastoral prayer noting that out of all the calls in McLee’s life – music, law and education – he had answered the “sweet, tortuous call to ordained ministry.

“He lived boldly, bravely and bountifully” into the ministry, Johnson said. “And throughout his physical journey, his grace never wasted away . . . his storm has passed over, hallelujah.”

Soloist Kathleen Theisen, who is the minister of music at Darien UMC, then offered a powerful rendition of The Lord’s Prayer, accompanied on piano by Mark Miller.

Bishop Warner Brown, president of the Council of Bishops, was the first in a series of “witnesses in thanksgiving for the life” of McLee. Brown described McLee as a bishop of the church with a passion for embracing the marginalized, joyfully calling for a day acceptable to God and calling the best out of God’s people.

“He had the courage to seek justice, mercy and love because he walked humbly with a God who would never leave him alone,” said Brown, who is also bishop of the San Francisco Area.

Brown told members of the McLee family that the bishops and the entire United Methodist Church were holding them in prayer. “But even though we are sad that we will be deprived of the joy of his companionship, we rejoice that we have witnessed the life of one of God’s very special people.”

He noted that while some people may have found the way McLee preached and rapped and sang to be unconventional, “McLee used all the gifts he had to turn a light on in the eyes of those for whom the light of hope had gone out.”

Bonnie Marden, chair of NEJ Episcopacy Committee, shared that McLee once asked her the proper way to cook lobster after learning that she was from Maine.

Rev. Adrienne Brewington credited McLee with bringing a fresh, new spirit to the NYAC cabinet. She cited his commitment to young clergy and his work to open the church fully to the LGBT community.

“He would often say, ‘It’s going to be difficult, but that’s no reason not to do it’,” she said. “He gave the cabinet permission to be fearless, too.” McLee had called for an end to church trials of clergy related to same-sex marriage issues.

Speaking on behalf of the McLee family, cousin Beverly Mason asked those gathered to take a look around them to the right, left, behind and in front.

“Words cannot express how grateful we are to be . . .  supported by this beautiful rainbow of diversity of ages, races ethnicities . . .” she said. Bishop McLee, who grew up in Brooklyn, leaves behind two sisters, two brothers, and several nieces and nephews.

Mason also shared a family quote that is based on Hebrews 11:1. “Faith is not believing that God can; it is knowing that He will.”

The bishop’s love of all things musical was represented in the offerings of two choirs: “God So Loved the World” by the Cantico Nuevo Ecumenical Choir directed by Jorge Lockward, and “It Is Well,” sung in Korean and English by the choir from First UMC in Flushing, Queens. And then the two choirs joined together to sing “Total Praise” as the hymn of preparation. A string quartet from First UMC provided the prelude and processional music.

The threads woven together by many of the speakers were what Rev. Gerald “Jay” Williams referred to as “McLee-isms” – phrases that the bishop would shout or rap out in meetings or worship. “When I say halle, you say lujah!” and “If you don’t know Jesus, you better ask somebody,” were two of McLee’s favorites.

Williams, who answered a call to ministry under McLee’s guidance in Boston and now leads his former congregation at Union UMC, started, “McBishop, it wasn’t supposed to be this way . . .” He went on to thank McLee for the courage, love and joy he brought to his prophetic ministry and to their mentoring relationship.

Rev. Dr. Zan Holmes, pastor emeritus of St. Luke “Community” UMC in Dallas who inspired McLee to enter ordained ministry, fired up the service as he testified about how McLee had blossomed wherever he was planted. He recalled with great joy the day that his protégée had called to tell him that he was “now speaking to Bishop McLee.” He related that McLee was at home in his own skin and was “never a stranger wherever he went.”

And even in their exchanges in last days of his life, he was not afraid, Holmes said.

“Oh, yeah!” was the response McLee texted to Holmes after he assured him about God’s presence in those trying times.

As if to punctuate Holmes’ story, Rev. Dr. Leslie Duroseau offered a heart-rending dance to “God Is Able,” sung by Cassandra Kellam and Julian Wamble, and accompanied by the songwriter, Mark Miller.

Ross Williams, chief financial officer for the NYAC, then read the Gospel lesson from John 3:16-21.

Retired Bishop Peter D. Weaver delivered the eulogy for McLee, who had served on his cabinet as a district superintendent in the New England Conference. Weaver said that he was not there as a bishop, but as one who could testify that his life had been changed by the ministry of Martin “Duke” McLee.

“I never expected to be here for this purpose, but here we are,” he said as he went on to thank the family for sharing their “baby brother” with the church.

“Life will never be the same because of Martin McLee,” Weaver said. 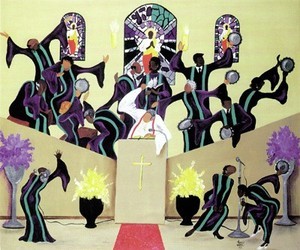 He noted that a few weeks before, McLee had changed the cover photo on his Facebook page to a picture of a church singing, dancing and praising God.*

“I wonder if he was anticipating this day . . . if he wanted us to see what was at the center of his ministry,” Weaver asked. In the middle of that picture, he explained, is the cross.

He saw the cross of Jesus at the heart of human life, Weaver said, pointing out that rather than polarize or pulverize, McLee called for inclusion and love of everyone – “the whosoevers” mentioned in John 3:16.

“His ministry was at the confluence of streams ‘just as I am’ and ‘justice for all’,” Weaver said. He wanted to dismantle the walls to build the beloved community.

As Weaver came to the end of his remarks, he declared “the doors of the church are open,” saying it was something that McLee always did at the end of his preaching. McLee never ended worship without a call to come to Christ. Weaver invited any of those gathered to come forward or to pray with a partner to “to commit ourselves to the ‘whosoevers’.”

During the commendation, Bishop Sudarshana Devadhar of the New England Conference and Bishop Sandra Steiner Ball of West Virginia, used McLee’s own words to call upon God to receive their colleague and honor him for all the work he had done for the church and for the lives he had touched.

The service drew to a close with a song that McLee often used at conferences and in worship. Mark Miller’s anthem, “Draw the Circle Wide,” had become like a theme song for McLee’s work to open wide the doors of the church. After the combined choir began, the song could be heard coming from every pew of the church:

Expressions of condolence can be sent to: