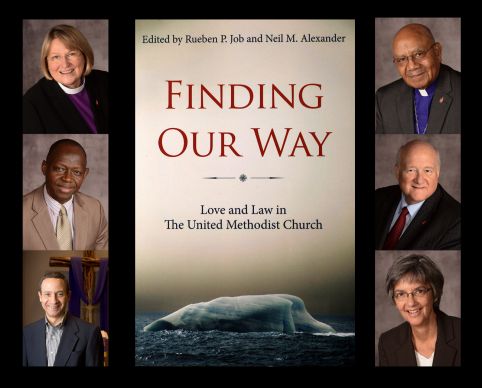 Photos courtesy of the Council of Bishops; graphic designed by Kathleen Barry, UMNS

The Connectional Table, which Ough chairs, plans to hold the second of three such public events from 8 to 10 a.m. CT, Nov. 1. The time of the event is in part because it would allow more members of the global denomination to participate.

“We need people across the globe to faithfully, respectfully and with a discerning heart be part of the conversation about a way forward,” Ough said. “This is really family business.”

Because of court actions this week, more than half of U.S. states likely will soon have legalized same-gender civil marriage. The U.S. Supreme Court on Oct. 6 declined to review appeals court rulingsallowing same-sex marriage in five states. The following day, the Ninth Circuit Court of Appeals struck down same-sex marriage bans in Idaho and Nevada, though that ruling is on hold for now.

United Methodists who would like to participate in this discussion have two possibilities:

• They can create YouTube video explaining a personal story that pertains to unity and/or human sexuality and pose a question about “Finding Our Way” to one of the bishops or the editor. Videos must be no longer than 2-3 minutes. Tag the video using #cttalks and email a link to aboggan@umc.org before Oct.17. Three videos will be selected and shown at the event. • Participants also can ask questions on Facebook and Twitter using the hashtag #cttalks during the livestream from 8 to 10 a.m. CT Nov. 1.

To watch live, go to http://umc.org/connectional-table-webcast on the day of the event.

Next month’s conversation will feature seven bishops who contributed to a book on human sexuality and church unity, “Finding Our Way: Love and Law in The United Methodist Church,” released by United Methodist Publishing House’s Abingdon Press.

The direction of the churchwide conversation is not a foregone conclusion, said Ough and other church leaders.United Methodists from around the world also will be able to ask the speakers questions through Facebook and Twitter using the hashtag #cttalks. Organizers also will select three video submissions from United Methodists to include in the discussion.

Bishop Hope Morgan Ward, episcopal leader of the North Carolina Conference, is the chair of the Connectional Table’s Human Sexuality Task Force, which has been working on a process for facilitating discussion on the issue.

Actions by the U.S. Supreme Court and the Ninth Circuit Court of Appeals have plenty of people buzzing across the United States. But they are unlikely to significantly alter the issues at stake for the church, said Ough and other church leaders.

“This is not just about the changing laws of the various states, but it’s really more about our ecclesiology, our internal culture, values and theology,” Ough said.

The Book of Discipline, the denomination’s law book, since 1972 has asserted all people are of sacred worth but the church considers the practice of homosexuality “incompatible with Christian teaching.” Church teachings define marriage between a man and a woman.

For just as long, United Methodists have debated that stance. United Methodist clergy, including one bishop, increasingly have been willing to publicly defy the denomination’s ban on officiating at same-sex unions.

General Conference has consistently voted to keep the language and over the years has expanded on restrictions against gay clergy and same-gender unions.

The 59-member Connectional Table is a United Methodist body of clergy and lay people that coordinates the denomination’s mission, ministry and resources.

After the first panel discussion on April 29, the body approved a motion to draft legislation that could change church law “to fully include LGBTQ persons in the life and ministry of the church.” LGBTQ stands for lesbian, gay, bisexual, transgender and queer or questioning.

But Ough said the body is not considering any specific legislation at this point. The Connectional Table’s Human Sexuality Task Force — which is organizing the panel discussions — is still looking at process for addressing the motion.

“We’re looking to maintain an openness to conversation,” he said. “At the same time on a parallel track, we’re looking at the implications of this particular action by the CT. We’re really pursuing parallel conversations, neither of which has come to a definite conclusion.”

Any legislation adopted by the Connectional Table would need the approval of General Conference, the denomination’s top lawmaking body, to take effect.

“There are a lot of people who still need to be invited to the conversation,” Ough said. “It’s not just a matter of representative leadership groups or groups that may be in a position to formulate legislation.”

However, advocates on opposing sides of the church debate both expressed impatience with the continued conversations.

Good News is an unofficial conservative-evangelical group that has been urging bishops to enforce and publicly support church law restrictions against same-sex marriage if the denomination is to hold together.

Love Prevails is an unofficial group that advocates the inclusion of gay, lesbian, bisexual and transgender people in the life of the church. Group members disrupted the Connectional Table’s meeting in November 2013, a move that resulted in human sexuality being added to the body’s agenda.

But he added that the church’s debate has gone on far too long. “At this juncture further debate and dialogue only demonstrates the consistency with which the majority maintains its position, and the frustration and grief it causes to the minority,” he said.

The Rev. Amy DeLong, a leader of Love Prevails, expressed her own concern about the upcoming panel. She said she worries that the bishops will “just model how you talk about people, not how you talk with them.”

She lives in Wisconsin, one of the states that began offering same-gender marriage licenses this week as a result of the U.S. Supreme Court’s action. She rejoices at that change but said she doesn’t expect the church to change anytime soon.

“This is real, tangible protection for gay and lesbian couples now — the kind of protection The United Methodist Church refuses to offer us,” she said. “It’s all tinged with sadness, too.”

Next month’s conversation will takes place in Oklahoma City, the day before the start of the Council of Bishops annual meeting. Because of limited space, observers will only be able to watch the proceedings online, Connectional Table leaders said.

Like the church members they lead, the bishops have differing perspectives on homosexuality and what the Bible says about it. Organizers of the panel say they hope the bishops can model the kind of “holy conversation” that is part of the denomination’s Wesleyan roots.

Talbert, one of the panelists, is now under a church complaint after officiating at the same-sex union of two men last year.

No matter their stance, bishops are tasked with providing “leadership toward the goal of understanding, reconciliation and unity within the Church.”

Ward expressed her hope that church conversations will lead not necessarily to uniformity but to unity within the denomination.

“Uniformity would be everybody having the same opinion,” she said. “Unity is love extended to people of differing opinion. Our founder John Wesley said Methodists love alike even though we may not think alike.”

Hahn is a multimedia news reporter for United Methodist News Service. Contact her at (615) 742-5470 or newsdesk@umcom.org