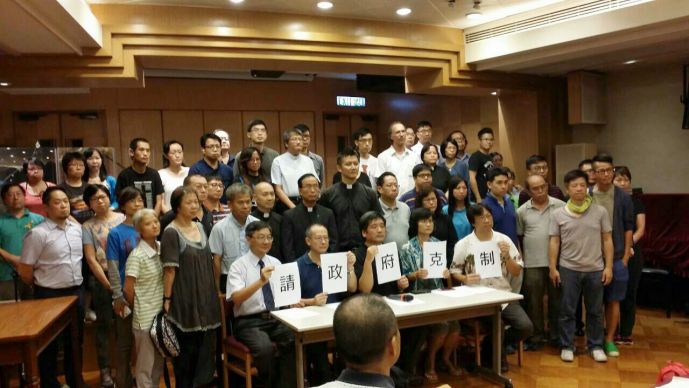 Methodists in Hong Kong have called for calm and restraint following continuing clashes between the government and protesters and joined in a statement from the Hong Kong Christian Council urging both parties to engage in dialogue.

As student-led demonstrations continue for a third week in Hong Kong, Christians are repeating their calls for dialogue between the government and the protesters.

In its statement promoting dialogue, the Hong Kong Christian Council appealed “to all parties involved to try their best to engage in rational discussion on further implementation of constitutional reform under the framework of the Basic Law,” an agreement reached prior to the handover of Hong Kong from Great Britain to China in 1997.

Christians, who make up 11.7 percent of the Hong Kong population, have been active in the protests, which began in late September as a demand for greater freedom in the election of the city’s chief executive in 2017.

According to news reports, the current executive, Leung Chun-ying, said on Oct. 16 that the city government would meet with protest leaders but did not promise concessions.

In an Oct. 4 letter to the Methodist congregations of Hong Kong, Yuen said the Chinese Methodist Church had provided shelter and supplies since the protests began “not because we support ‘Occupy Central’ but because of our position as a church in Wan Chai.”

The situation has provided an opportunity to serve in the name of Christ, he wrote. “Our church is becoming a church without barriers, welcoming people to pray, rest, enjoy their lunch box and use the toilet. Because our church is located at a road crossing, with lots of protesters with different political views passing by, we welcome them all in to have a short rest here.”

The Hong Kong Christian Council has urged the government to re-open the Civic Square and Tamar Park for peaceful protest. The council also asked the police to use careful judgment and restraint and appealed to the students and protesters “to negotiate with the related authorities so that the public can re-use the blocked roads.”

Mellor said he found himself in the middle of a “fracas” over blocked roads earlier this week when taxi drivers and about 50 men “started removing barriers on Queensway and shouting abuse at students. The police were caught in the middle of this and in my view handled it all well keeping the groups apart.”

The result, however, was an increase in the number of students and tents blocking the road, he added.

“The politicians seem to fear reasonable dialogue and protestors will find the move from the street to the negotiating table to be much more demanding,” Mellor observed. “However, many senior commentators believe there is room for maneuvering within the framework laid down by the Communist leaders.”

Mei Yan “Kennis” Lam, a missionary assigned to Japan by the United Methodist Board of Global Ministries in partnership with the Methodist Church of Hong Kong, said she has followed the situation with concern.

“Hong Kongers are always calm and well-ordered. Demonstrations in Hong Kong are always peaceful,” she told United Methodist News Service. “But because the government has been ignoring the voices of Hong Kong citizens on genuine universal suffrage, it creates the rebound reaction of the citizens.”

The solution, Lam believes, “is genuine conversation” between the government and those citizens.

Mellor, who prays for “a positive way forward,” said the situation will “boil over” without dialogue. “The refusal to engage in detailed negotiation is an abrogation of responsibility by politicians and student leaders,” he added. “Hong Kong deserves better.”

Lam, who holds a Master of Divinity degree from the Chinese University of Hong Kong, has watched from afar as friends, colleagues and teachers from the divinity school there participate in the protests.

She is “relieved” by the response at Chinese Methodist Church, where she spent a year as an intern while in theology school. Yuen always taught the congregation to be a church without barriers, she noted, serving the community and society “with all we have,” including the church building.

“I am proud of my faith and my church in such a critical moment,” Lam said. “I think what we are doing showed the true meaning of the Gospel.”

Bloom is a United Methodist News Service multimedia reporter based in New York. Follow her at http://twitter.com/umcscribe or contact her at (646) 369-3759 or newsdesk@umcom.org