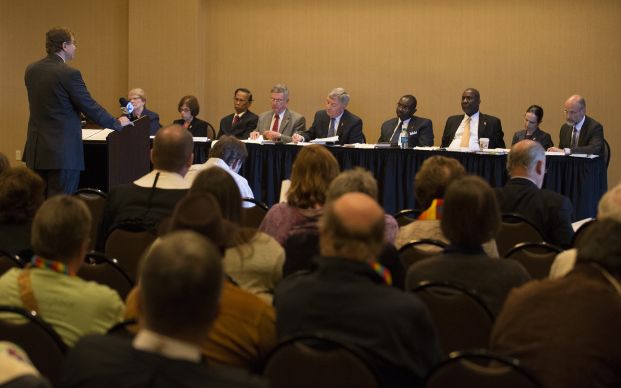 The Rev. Christopher Fisher (left) addresses the United Methodist Judicial Council which will decide whether to uphold the reinstatement of the Rev. Frank Schaefer, who lost his credentials after being found guilty in a church trial last November of performing a same-sex wedding ceremony for his son. An oral hearing on the matter opened the council’s Oct. 22-25 fall meeting in Memphis, Tenn. Fisher serves as counsel for the church.

The question of whether an appeals committee was correct in restoring the clergy credentials of the Rev. Frank Schaefer was argued Wednesday, Oct. 22, before United Methodism’s top court.

Schaefer lost his standing in the denomination’s Eastern Pennsylvania Conference after being found guilty in a church trial last November of performing a same-sex wedding ceremony for his son. Church law prohibits clergy from officiating at same-sex weddings.

An oral hearing on his case opened the Judicial Council’s Oct. 22-25 fall meeting in Memphis, Tennessee,  one of 21 docket items under consideration by the nine-member body. Decisions about the Schaefer case and the other items are not expected to be made public until a couple of days after the meeting.

In the penalty stage of the November 2013 trial, the court suspended Schaefer from his ministerial duties for 30 days and declared that if he could not “uphold the (Book of) Discipline in its entirety” at the end of the suspension, he would surrender his credentials. He refused to do that, and on Dec. 19, the Eastern Pennsylvania Conference Board of Ordained Ministry asked him to give up his credentials.

After a hearing in June, the Northeastern Jurisdictional Committee on Appeals restored his credentials and ordered the Eastern Pennsylvania Conference to compensate Schaefer for all lost salary and benefits dating from Dec. 19, 2013.

The Rev. Christopher Fisher, who served as counsel for the church, appealed the reinstatement to the Judicial Council and laid out the case for the Eastern Pennsylvania Conference. He was accompanied by Robert Shoemaker, the conference’s legal advisor and assistant counsel.

The Northeastern Committee on Appeals, Fisher argued, misinterpreted two previous Judicial Council decisions in making its decision and did not take into account that The Book of Discipline has changed over the years.

"Trial courts now have the power to delay a penalty,” Fisher said. “The Discipline does not specify what that delay should look like." In Schaefer’s case, he argued, there were not two penalties but a “seamless penalty with a lawful delay."

The only requirement for Schaefer to avoid losing his credentials, Fisher said, “was a commitment to the polity of the church.” All United Methodist pastors must make that same commitment, he added.

Naming “two other significant errors,” Fisher said a brief he had filed with the council elaborates on charges of bias by the committee on appeals and reports of questionable conduct by Schaefer.

Fisher did not provide further details during the hearing but when the Rev. Scott Campbell, counsel for Schaefer, spoke to the Judicial Council, he argued that unverified allegations are not part of the official record and should not be considered.

"We do not want to give the impression that we concur with this serious allegation (of bias),” Campbell said. “Having an opinion, even a strongly held opinion, is not a disqualification from serving on a judicial body in The United Methodist Church." Church members must just be willing to set those opinions aside and be guided by the Discipline, he added.

Campbell argued that Schaefer never said that he would violate the Book of Discipline in the future, but, “because he is a man of deep integrity,” Schaefer also could not say what would happen in an ambiguous future.

After the hearing, Schaefer told United Methodist News Service that both sides had made good points in what he considered to be a discussion about the technicality of church law.

Fisher said he is looking for guidance from the council to clear up confusion on what can and can’t be imposed as a penalty by a trial court.

The arguments presented by the Eastern Pennsylvania Conference, he said, have “strong points the Judicial Council has to answer for the sake of the whole church.”