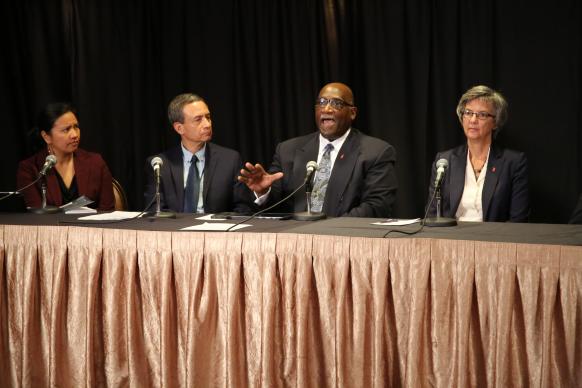 Bishop Gregory V. Palmer, second from right, speaks during a webcast on human sexuality. At his left are the Rev. Amy Valdez Barker and Neil Alexander. At his right is Bishop Hope Morgan Ward.

A video submitted by a mother whose gay son died by suicide after facing condemnation in the church was one of four personal stories viewed and discussed by a panel on sexuality in The United Methodist Church.

The mother’s video sparked the most vehement reaction from the panel of six bishops and the head of the denomination’s publishing house during the Nov. 1 live webcast, which was viewed by about 450 people around the world. The webcast was the second of three interactive, online discussions around human sexuality planned by the denomination’s Connectional Table, which coordinates the denomination’s ministry and resources.

The discussions have centered mainly on United Methodists’ differing views of how best to minister with LGBTQ individuals. The initials stand for lesbian, gay, bisexual, transgender, queer or questioning.

In the video, Julie Wood recounted how her son, William Benjamin “Ben” Wood, was deeply involved in his church until a new youth minister arrived. One night before a mission trip, the youth minister pressured each of the youth in Ben’s presence to say they were uncomfortable being around him. The youth minister told the youth “Ben is going to hell" and that he was unworthy and not a representative of Christ. He did not go on the mission trip. He took his life years later as college student.

“We’ll never know how much of an impact this traumatizing time at youth had on his decision to end his pain. But I know he never set foot back into a church,” Wood said in the video.

Florida Area Bishop Kenneth Carter said Wood’s experience was a “failure not only at the denominational level but also at the local level where people become disciples and experience grace.”

“The incompatibility language is not helping us in our mission. People hear that as if it were spoken with a megaphone and they don’t hear our words of grace,” Carter added, referring to language in The Book of Discipline that says the practice of homosexuality “is incompatible with Christian teaching.”

Retired Bishop Melvin G. Talbert said he decided to stand against church law on homosexuality in part because of learning of suicides such as Ben's.

Fort Worth (Texas) Area Bishop J. Michael Lowry said, “Shame is not a tool or weapon to use against anyone.”

She said she remains in the denomination because “I have to believe change must happen.” She said the church can make a start by providing solid education on sexuality for parents, youth, congregations and pastors.

Before the event, the Connectional Table had invited church members to submit videos sharing their perspectives on human sexuality. Four were submitted. The other three came from gay church members.

At its peak viewership, about 450 computers were screening the Nov. 1 webcast, which began at 8 a.m. Central Time in hopes of accommodating a global audience. The discussion began at 2 p.m. in Frankfurt, Germany, 3 p.m. in Harare, Zimbabwe, and 9 p.m. in Manila, Philippines (to name three localities with a United Methodist presence).

The discussion will be translated into French, Portuguese and German.

The Connectional Table’s third and last discussion on human sexuality is scheduled to take place in February 2015 in Maputo, Mozambique. The plan is to include mainly United Methodist leaders from church regions in Africa, Asia and Europe.

The panel of six bishops as well as the top executive of the United Methodist Publishing House were all contributors to  “Finding Our Way: Love and Law in The United Methodist Church,” released in late April by the publishing house’s Abingdon Press.

Divisions in the church were evident before the event began. Three representatives of the unofficial advocacy group Love Prevails tried to enter the Oklahoma City hotel meeting room where the panel was being videotaped for online streaming. Event organizers and two off-duty Oklahoma City police officers hired to provide security for the event turned them away.

Love Prevails aims to change the church’s stance on homosexuality and what it sees as discrimination by disruption if necessary. In this case, the group promised not to disrupt the livestream.

Ultimately, the three watched from a public lobby area and held cardboard signs to protest when the bishops departed. They criticized the panel for not including any LGBTQ individuals.

One of the women, the Rev. Julie Todd, said she thought the best part of the morning's presentation was the inclusion of the videos. But she added that most of the bishops' responses were typical.

“They are unwilling to have these conversations in public forums in which they can be held accountable by actual LGBTQ people,” she said. “The fact that they would not let us in the room when we promised not to interrupt the livestream is an indication of their fear and control.”

All outside observers, including a UMNS reporter, were not allowed in the room because of concerns about limited space. No other advocacy group came to the morning session.

For more than 40 years, United Methodists have debated the stance in the church’s Book of Discipline that the practice of homosexuality “is incompatible with Christian teaching.” The debate has intensified in recent years as more states in the United States and more nations around the globe have legalized same-gender civil marriage.

The global United Methodist Church is not alone in dealing changing social attitudes and civil laws. In recent weeks, both Catholic bishops and Southern Baptist leaders have met to discuss and reaffirm their respective denominations’ views of family and marriage.

Same-gender marriages are now legally recognized in 32 states and the District of Columbia. At the same time, homosexual acts are criminalized in 38 of 54 African countries, including most of the 18 African countries that could send delegates to The United Methodist Church’s top lawmaking body, General Conference.

Church law sanctions marriage only between a man and a woman and bans the ordination of “self-avowed practicing” gay clergy.

But some United Methodist clergy have publicly defied the prohibition against performing same-gender unions. Among them is the panelist Talbert, who is now under a church complaint after officiating at the same-sex union of two men last year.

In addition to Carter, Palmer, Lowery and Talbert, the other panelists included Bishops Hope Morgan Ward and Rosemarie Wenner. Each spoke about their essays in the book “Finding Our Way.”Also participating was Neil Alexander, president and publisher of the United Methodist Publishing House, who helped edit the book. The Rev. Amy Valdez Barker, the Connectional Table’s executive secretary, was the moderator.

Bishop John K. Yambasu of Sierra Leone initially had planned to participate but had to cancel. He faced a potential 21-day quarantine in the United States because of the Ebola outbreak in his country.

Palmer said the Book of Discipline makes no claim to be perfect, and can be changed by General Conference. He stressed that the Discipline provides a framework for ministry and the covenants that clergy and lay member agree to follow. Still, he said, church law does not require that complaints against clergy necessarily result in church trials.

Carter said he thinks the lack of unity around sexuality is a symptom of a deeper condition — “that is, our theological incoherence.”

“On one side of the issue, there is our theology of prevenient grace and social holiness and on the other side, there is a theology of justifying grace and personal piety,” he said. He said he thinks the current impasse results in part “because we are talking past each other.”

Is there room for debate?

Viewers could submit questions to the panelists via Twitter using the hashtag #cttalks. One of the questions was if the denomination had room for more than one biblical interpretation.

“We are people who love Scripture,” said Ward, who leads the Raleigh (North Carolina) Area. “It is a simple, observable truth that we differ on how we interpret Scripture around human sexuality. So, I would say an emphatic yes that absolutely, there is room for more than one view or opinion on what Scripture is saying.”

Wenner, after the event, said she was grateful for the questions from viewers as well as four videos submitted for inclusion. As Germany’s bishop, she was the only panelist who does not live in the United States.

“For sure, we did not a have the full spectrum of opinions at the table,” she said. “I hope and pray that through this panel and through many other efforts, people are encouraged to create space for dialogue and for prayer so we can move toward a better future.”

Hahn is a multimedia news reporter for United Methodist News Service. Contact her at (615) 742-5470 or newsdesk@umcom.org .