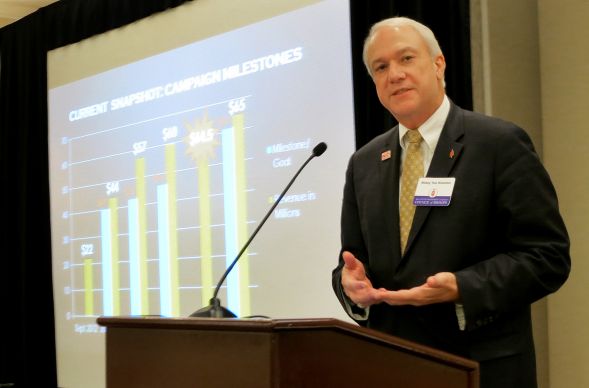 United Methodist generosity and creativity in the fight against malaria are saving millions of people’s lives, a world-known expert on tropical diseases told the denomination’s bishops.

“I have heard about the work that your congregations, particularly your young people, have been doing — the level of creativity, energy and commitment — to save the lives of millions of children and women in Africa,” said Dr. Christoph Benn.

He is the director of external relations and a founding board member of the Geneva-based Global Fund to Fight AIDS, Tuberculosis and Malaria. He addressed the Council of Bishops during an update on the denomination’s Imagine No Malaria initiative.

“You have the sincere thanks of not only of the Global Fund, your partner, but also all the people whose lives have been changed by these activities,” he said.

So far, the global United Methodist Church has raised an estimated $64.5 million in gifts and pledges in its campaign to eliminate needless death and suffering from malaria in Africa, announced Pittsburgh Area Bishop Thomas J. Bickerton. He leads the Western Pennsylvania Conference and chairs the denomination’s Global Health Initiative.

“I’ve seen the connection come alive,” Bickerton told fellow bishops. He noted that 42 conferences have made a commitment to participate in the initiative. The average individual gift is $96 and the average pledge is $800.

The United Methodist Church aims to raise $75 million by the end of 2015 for Imagine No Malaria. Of those funds, the denomination has committed that $28 million will go to the Global Fund.

The United Methodist Church is the first faith-based group to work closely with the Global Fund.

The Global Fund, a public-private partnership, is the world’s largest funding source for health programs that fight HIV/AIDS, tuberculosis and malaria. People who have bought products with the (RED) label have helped support its work.

The United Methodist Church is both a donor and recipient of grants from the Global Fund, which uses its funds in part for prevention measures such as insecticide-treated bed nets as well as treatment of the disease.

The Global Fund receives support from governments and foundations worldwide. Its immense purchasing power means it can get bed nets and other supplies cheaper than most health agencies can on their own, Benn said.

Imagine No Malaria also is funding a number of other strategies. The campaign supports United Methodist hospitals, clinics and health boards across Africa that work to prevent and treat the disease.

The various efforts are working. Since 2000, malaria deaths have decreased by 42 percent worldwide, Benn said. Deaths are down by 49 percent in Africa, where the disease has been most virulent.

Benn talked of recently visiting a hospital in eastern Africa. He asked to see its younger malaria patients and learned the hospital had not admitted a child with malaria in two weeks.

A physician, Benn has more than 25 years of experience in global health and advocacy. He has worked as a clinician and public health official in Germany and the United Kingdom, as well as on the staff of a rural hospital in Tanzania.

He told the bishops that since the current devastating outbreak of Ebola in the West Africa countries Sierra Leone, Liberia and Guinea, the Global Fund has freed up funds to fight this virus as well.

“We need to do everything we can to contain Ebola. I would not for a second underestimate the challenges in these countries,” Benn said. “But we also have to keep Ebola in perspective compared to the many other health challenges the world faces.”

He said about 1,800 children still die every day from malaria, while the total mortality of Ebola at this point is estimated to be around 5,000.

Nevertheless, Benn expressed hope that malaria deaths can be eliminated. He even suggested a vaccine may be available in a few years.

In all of this, he said, The United Methodist Church plays a key role.

“I believe that churches have a unique capacity to be a source of imagination, as they have been for centuries,” he said. “They have an unparalleled network of life-giving communities all over the world. What the churches provide affects the progress achieved.”