German bishop writes of fall and call of Berlin Wall

German bishop writes of fall and call of Berlin Wall 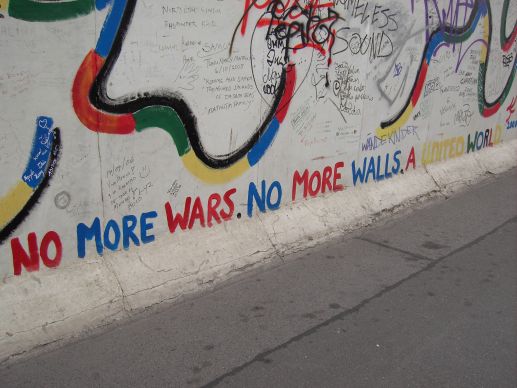 Oct. 2006 image shows graffiti on East side of Berlin

There are very few German citizens older than 35 years or so, who do not know where they were when they heard the news: “The borders in Berlin are open!” The people of East Berlin went immediately to see if that was true. They passed Checkpoint Charlie and other entrance gates. And quite soon they danced in the streets of the western part, and yes, some even literally climbed over the wall.

My husband and I were vacationing on the Azores on November 9, 1989. We could not believe what we saw by chance in the news. And we weren’t able to understand what the Portuguese journalist was saying. Through a phone call with our family in Germany we were able to assure ourselves that in fact a dream had come true!

This happened 25 years ago. Watching the pictures and remembering the excitement of those days my first comment on what came about in the night from Nov. 9 to 10, 1989 is: “Thanks be to God!” I well know: The opening of the border that divided my home country and the whole process of the reunification did not fall from nowhere. Thus I see the fact that the struggle of many citizens of the German Democratic Republic (the then Communist part of Germany) led to a peaceful change as a huge gift from God, as many Christians do. The prayers were answered, as the demonstrations in Leipzig, Dresden and elsewhere at that time in Autumn 1989 started.

For me God’s gift of the unification of my nation is also a call. There are far too many walls in our world that seem to be too big and strong to pull them down, countless people longing for a life of freedom and dignity.

The Korean nation has been divided since 1948. The Korean War ended in 1953 with a ceasefire, but there is no peace contract even today. During my visits in South Korea, I was frequently asked: “Pray with us, so that we will overcome our division as well!” I took this as my task.

Since I worshipped at the wall that divides the USA and Mexico near San Diego a few years ago together with fellow bishops, I also pray that the American nation might overcome fear and welcome neighbors.

Because I am grateful for my unified country, I encourage my fellow Germans to share what we received. Many of us, myself included, have far more than enough.  We can make room for refugees that arrive in Germany. Distrust and worse, hostility and hatred towards strangers should not be allowed to grow in our society.

We Germans have two commemorations on Nov. 9. The night of Nov. 9, 1938, the Nazis burned down many synagogues throughout Germany. And the vast majority of the German population, including many faithful Christians, observed what happened and were quiet.

This commemoration is a legacy too. We have not only the history of a peaceful fight against a dictatorship, but also a history of oppression towards Jewish people alongside with Roma people and others, including homosexuals.

And yet, by God’s grace today, we are a blessed country. The work of many to build up a stable democracy in Germany bears fruits. We have to keep it, to multiply it, and to pass it on to others.  From what happened Nov. 9, 1938 and Nov. 9, 1989, we can learn to do no harm, to do good and to be part of God’s work so that dreams can come true.

Wenner is the current presiding bishop of The United Methodist Church in Germany.