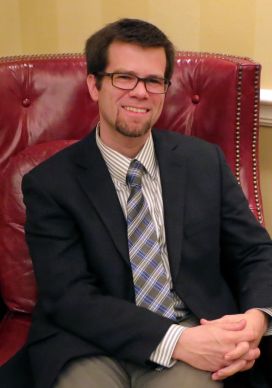 The Rev. Kevin M. Watson addressed the Council of Bishops about the importance of Christian conferencing in the Methodist movement. He is assistant professor of Wesleyan and Methodist studies at Emory University's Candler School of Theology in Atlanta.

Reclaiming an accurate understanding of holy conferencing is the most important thing United Methodists can do to revitalize the denomination, a Methodism scholar told the denomination’s bishops.

“I believe that if we were to reclaim this practice, that God would bless our efforts and we would see profound renewal in communities where this took place,” said the Rev. Kevin Watson, assistant professor of Wesleyan and Methodist Studies at Emory University’s Candler School of Theology in Atlanta.

However, he quickly added, everything depends on “getting right what holy conferencing is.”

Watson, who is also an ordained elder, returned to his home Oklahoma Conference to address the Council of Bishops at the invitation of the council’s Committee on Faith and Order. He is the author of The Class Meeting: Recovering a Forgotten (and Essential) Small Group Experience.

He addressed a group eager to cultivate the Wesleyan practice of Christian conferencing, especially as United Methodists head toward what many expect to be a particularly contentious General Conference in 2016. General Conference is the denomination’s top lawmaking assembly.

Methodism’s founder saw such conferencing “not as a technique or a set of rules and values that enables us talk nice to each other, but as a way we as United Methodists live together in Christian community,” Alsted said.

Watson described how to conference together in the Wesleyan way and tried to clear up some misconceptions.

He pointed out that John Wesley never used the phrase “holy conferencing” that United Methodists so often use today.

“That’s kind of a bummer,” Watson admitted. “But he did use the phrase Christian conferencing. Yes, he only used that phrase once. But his use of it was very significant — so much so that I think it completely justifies our use of it today.”

Watson also emphasized that Christian conferencing should not simply be seen as a way to have polite disagreement. Instead, he said, it should be seen as “the distinctive way that Methodists gather together to talk about their relationship with God in order to grow in love for God and neighbor.”

Wesley referred to Christian conferencing in his 1763 “Large Minutes” as one of five channels through which God makes grace available to humanity — practices grounded in commandments from Christ. Wesley listed it alongside such disciplines as prayer, the study of Scripture, fasting and Holy Communion.

Under Wesley’s leadership, Christian conferencing was practiced mostly in class and band meetings. These weren’t small groups devoted to Bible studies such as many churches have today, Watson said. Instead, the meetings primarily focused on Christian fellowship and accountability.

In class meetings — co-ed groups of seven to a dozen people — the primary focus was the questions: “How is it with your soul?” or “How does your soul prosper?” Membership in the Methodist movement required faithful attendance at class meetings, Watson said.

Wesley, in “A Plain Account of the People Called Methodists,” described the impact of these class meetings. “Many now happily experienced that Christian fellowship of which they had not so much as an idea before,” he wrote. “They began to ‘bear one another’s burdens,’ and ‘naturally’ to ‘care for each other.’ As they had daily a more intimate acquaintance with, so they had a more endeared affection for each other.”

The class meeting, Watson said, “was at the heartbeat of the vitality of the early Methodist movement.” Between 1776 and 1850, American Methodism grew from one of the smallest Christian groups to the largest, by far, at nearly a third of the population.

Band meetings — groups of five to seven people divided by gender and marital status — were focused on the confession of sin. Watson likened them to today’s 12-step groups that help people recover from addictions.

“The confession of sin was for the sake of growth of holiness not for the growth of shame,” Watson said.

“Methodists don’t believe that God just offers forgiveness. We believe God offers healing and freedom from that which we have been through.”

Watson also pointed to the explosion of transformational small-group ministry at nondenominational megachurches, such as Oklahoma-based Life Church.

“Putting it strongly, we can’t let them be more Wesleyan, more Methodist, than we are,” he said.

Watson urged the bishops to make Christian conferencing a theme of the coming 2016 General Conference. By that, he said, he means teaching about the practice’s history and theology, lifting up United Methodist examples and casting a vision for its role in Christian discipleship.

Los Angeles Area Bishop Minerva G. Carcaño later told the bishops that the Commission on General Conference, of which she is a member, plans to have three sessions to focus on the history and role of Christian conferencing and a prayerful consideration of the denomination’s future.

Arkansas Area Bishop Gary E. Mueller was among the many bishops impressed with Watson’s presentation. He said he saw in the address insights into how the Holy Spirit is stirring the church.

“I have a special interest in experiencing spiritual revival,” Mueller said. “I think Christian conferencing is a way to both bring about that kind of revival and, once people start experiencing it, to really shape them for the whole point of revival, which is to make disciples of Jesus Christ.”

In difficult times for The United Methodist Church, Watson sees the return of holy conferencing as a reason for optimism.

“There is much that threatens to divide United Methodism,” Watson said, “but this is a practice that has been unifying in a number of contexts.”