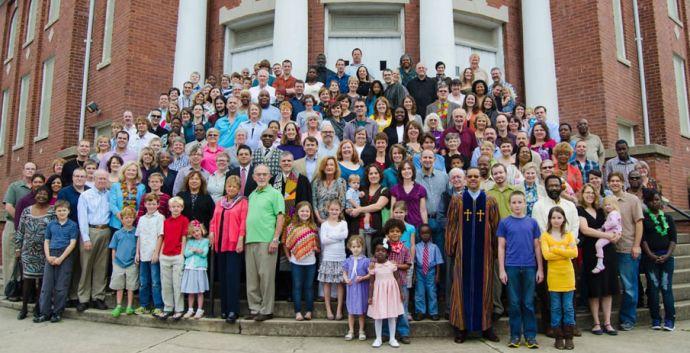 Green Street Church's pastor is facing a complaint for not officiating at a same-sex wedding. The Rev. Kelly Carpenter is sympathetic to the couple filing the complaint. He sees the congregation's inclusiveness as key to its growth.

A United Methodist pastor is facing a complaint under church law because he declined to officiate at a same-sex wedding.

A gay couple at Green Street Church, a United Methodist congregation in Winston-Salem, North Carolina, has filed the formal complaint against their pastor, the Rev. Kelly P. Carpenter.

The couple, Kenneth Barner and Scott Chappell, charge Carpenter under the Book of Discipline with“failure to perform the work of ministry.” Their complaint also accuses Carpenter of “gender discrimination” in not officiating at their ceremony. Gender discrimination is also a chargeable offense under church law.

The United Methodist Book of Discipline, the denomination’s book of church law and teachings, also states that all people are of sacred worth but the practice of homosexuality is incompatible with Christian teaching,” It is a chargeable offense under church law for clergy to preside at same-sex unions.

In the complaint, the couple says the denomination’s rules are contradictory.

“God’s grace is available to all and so should the pastoral ministry (be),” the complaint said.

Carpenter said he has followed the church’s prohibition against same-gender weddings because he does not want to jeopardize his work for the church or harm the other ministries of Green Street Church.

Church law also gives pastors discretion in deciding whether to marry a couple. However, Carpenter welcomes the complaint from Barner and Chappell.

“If there was a way for me to be a co-signer with the complaint, I think it’s right on the money,” he said. “It really calls out the contradictions in our Book of Discipline, which calls us to be ministry with all people.”

Chappell made a similar argument.

Earlier witness: No I do’s until all can marry

Green Street United Methodist Church made national headlines in March 2013 when the church’s leadership council decided not to hold any weddings in the church sanctuary until the denomination lifts its ban on same-sex marriage.

Initially, people protested the church’s decision outside worship services and through emails. But eventually the church attracted supporters, too. Since the leadership council’s decision, Carpenter said worship attendance has risen from around 160 to consistently more than 200 each Sunday.

Carpenter said he has honored the leadership council’s request since 2013, but he has officiated at one opposite-sex wedding outside the sanctuary. At the church’s request, he did not sign the civil marriage license, requiring the couple to get a local magistrate to sign.

In its 2013 public statement on marriage, the church also said its pastors still would offer premarital counseling for “all couples, regardless of orientation.”

It said pastors, at their discretion, could perform a service of relationship blessing for couples. Such a service, the statement said, would not include vows, exchange of rings, a pronouncement of marriage or covenant-making language. The services can include a Scripture lesson, an exchange of blessings written by the couple and prayers.

Carpenter has performed five such blessings for both straight and gay couples. He offered to do the same for Barner and Chappell, but they declined. Instead they asked for him to perform their wedding off-site from the church.

“Separate is never equal,” Chappell told UMNS. “It’s the same reason why we didn’t leave the state when other states had marriage equality. It felt like having to go elsewhere or having an altered ceremony in order to comply with United Methodist rules seemed diminished in some way. We declined to do that and chose to this instead so we can start this conversation.”

Ultimately, he said, the couple hopes one day to “actually exchange our vows in front of God and our church family, our biological families and friends.”

Barner and Chappell, together for nine years, have been active members of the church for four. Barner was the lay leader of the church when it released its statement on marriage and was in full support of it. He is now the chair of the church’s leadership council.

In October of this year, a U.S. federal judge overturned North Carolina’s ban on legal recognition of same-gender couples. But the church has maintained its policy.

The complaint is now in the hands of Bishop Larry M. Goodpaster, the resident bishop of the Western North Carolina Conference.

“I have initiated the proper response according to The Book of Discipline,” the bishop told UMNS. “Because this is now a personnel matter of the annual conference, it will need to remain confidential until further notice.”

As bishop, Goodpaster is charged with following a process that encourages finding a resolution that satisfies the bishop, the individuals lodging a complaint, and the one facing the complaint.

Carpenter said he didn’t know how the process would go “mostly because we are pretty much in agreement about the problem in the church. We need to figure that out.”

He said he thinks the church’s public witness in this dispute has the potential to be “uniting” for the congregation. Carpenter stressed that Barner and Chappell are serious about the complaint, but he commended them for finding a creative way designed not to harm the church.

“This may get me in some trouble, but it may be the kind of trouble I’ve been looking for,” Carpenter said.

Hahn is a multimedia news reporter for United Methodist News Service. Contact her at (615) 742-5470 or newsdesk@umcom.org .