It is Well With the Souls of West, TX

It is Well With the Souls of West, TX

4/22/2013
by Vance Morton*
“When peace, like a river, attendeth my way, when sorrows like sea billows roll; whatever my lot, thou hast taught me to say, It is well, it is well with my soul.” 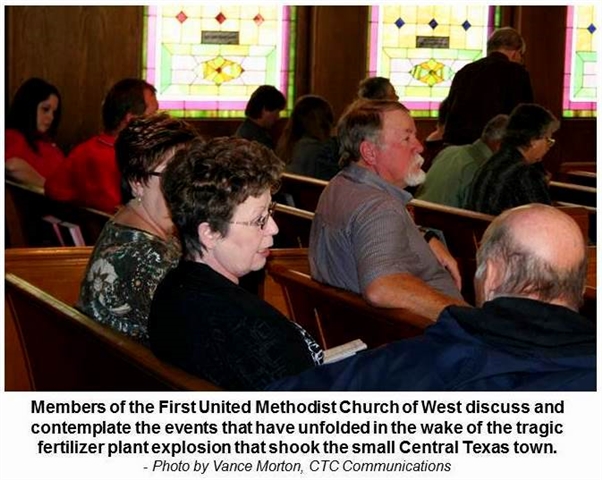 The words of the Horatio G. Spaffords great hymn “It Is Well with My Soul” (No.377 in your United Methodist Hymnal if you’re playing along at home) have been sung countless times by countless worshipers in countless churches over the years. There is little doubt, however, that the words have ever held more meaning to those doing the singing at First United Methodist Church of West Sunday morning.
The mood of those filling the pews of the nearly 120-year-old church would best be described as that of a people still in shock or mourning – at least that would be the perspective of someone visiting for the first time. Such a perspective, while understandable and probably even accurate on some levels, was quickly proven to be mistaken. During the course of the morning service and in conversations following, West FUMC proved to be a congregation dealing with the tragedy that has befallen its community with a peace and strength that comes from an unshakeable faith in the goodness and mercy of God.
Whether brought forth in the opening statements and sermons, prayer requests, songs or during a special time of sharing, the message of the day was consistent and clear – there is nothing to fear for God has been, is now and forever will be with us. 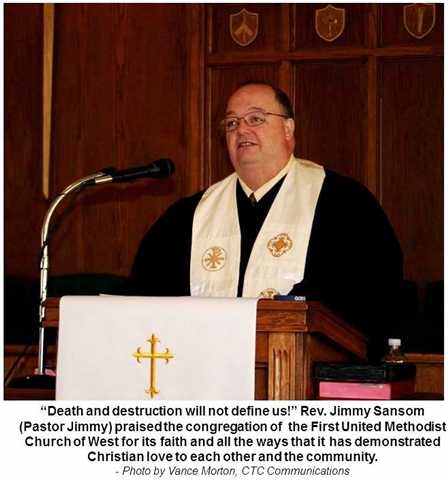 “It is well with my soul.”
From the first few lines of his message, Rev. Jimmy Sansom’s (Pastor Jimmy), senior pastor, West FUMC, made it clear that this service was to be a service of thanksgiving, praise and inspiration. “We, as a church and a denomination, have come together tremendously well,” he declared. “It has been inspiring to see people helping people again.”
In the midst of all the chaos in those first few hours following the blast, I saw people helping people, over and over and over again,” Rev. Sansom continued. “People from [West FUMC] helping other people! There were no strangers – only God active in us and through us.”
Rev. Don Scott, District Superintendent of the Central Texas Conference’s Central District, opened the service with a word of welcome from the entire conference and assured those gathered that the conference and the entire United Methodist Connection is standing with and praying for West. “I just want to let you know that the United Methodist Church stands with you,” said Rev. Scott in his remarks. “My phone and computer have been inundated with calls, texts and tweets from people from all over wanting to know how and when they can help. This is part of the glory of our connection…we are together and we will continue in that.”
Rev. Scott also introduced members of the United Methodist Committee on Relief (UMCOR) who were on hand to support and address the damage we cannot see and touch. “We can see the broken windows and we can see the ashes and we can see the lacerations and the bandages, but there is another injury we can’t see. And that is of our human soul and heart,” remarked Rev. Scott. 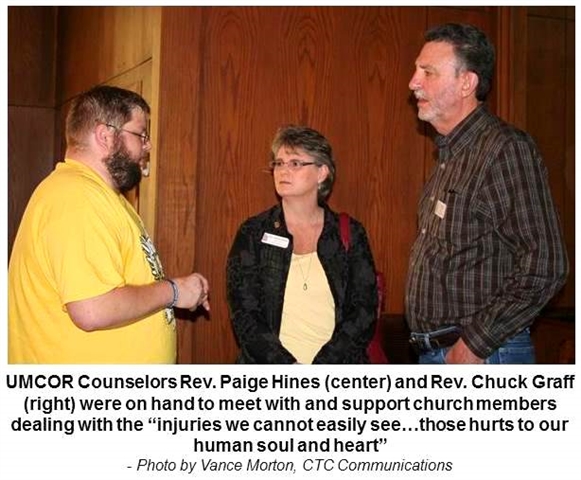 “We will be here for those hurts and pains and to rebuild those houses which are our very being and soul”
Following Rev. Scott, it was time for the joys and concerns of the congregation to be brought forth and this is the moment that it became evident to all that this collection of Christian believers was bruised not broken. Instead of the expected prayers of concern for what had been lost, the first prayer was a prayer of joy for all the ways that God has revealed Himself since the explosion. This was followed by prayer of thanksgiving that it happened when it happened because the human losses could have been so much worse during almost any other time. The next comment was a reminder for all to find time amidst all the chaos to travel a few quick moments in any direction from town to witness the springtime glory that is the Texas Wildflower season.
“It is well, it is well with my soul.” 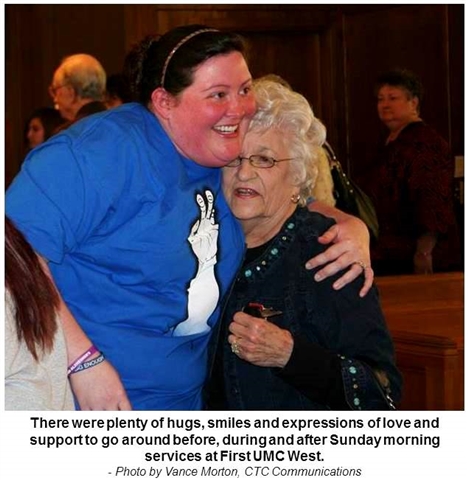 Tales of heroism, divine assistance and awe were offered by church members during a special time of sharing set aside so that those gathered could talk about their experiences, needs or whatever was on their heart. While many comments were emotional, there was never a sense of betrayal or loss conveyed. It was rather a sense of praise and thanksgiving of all the ways that God has revealed Himself during these trying times. Carol Waddell, a long-time resident of West and member of the West FUMC family, summed up the feelings expressed very well in her closing comments. “This experience has blessed me greatly,” she said. “I hope all folks feel these blessings as that’s what’s going to get us all through this.”
Before sending the faithful back out into the community to continue the healing and recovery process, Pastor Jimmy took the opportunity to say what was seemingly on the minds, hearts and lips of everyone in West that day. “Death and destruction will not define us as a church or community!” Pastor Sansom exclaimed. “How we show the love of God to each other and the world is what will define us. This will be around for a little bit, but what will be remembered in the long term are the people who gave their lives and those who came together to help others get out of this tragic state.”
It is indeed well with the souls of West FUMC.
Please look for a video tomorrow featuring highlights of the comments made during the service.
*Vance is the director of communications & IT for the Central Texas Conference (and a huge fan of the beauty and power of the Christian spirit). vance@ctcumc.org

From http://www.ctcumc.org/ - the web site of the Central Texas Conference