1/15/2015
An Educational Opportunity for the Students of Connecticut and Westchester, NY

Developing our children means passing on perspectives and a meaningful view of the arch of history. Things are because of what has been.

The film SELMA is a substantive work of art about the 1965 march on Selma, Alabama that is resonating in many corners. “SELMA” is the story of a movement. The film chronicles the tumultuous three-month period in 1965, when Dr. Martin Luther King, Jr. led a dangerous campaign to secure equal voting rights in the face of violent opposition.

This year is the 150th anniversary of the Civil War when the question of the African American vote was thought to be resolved. That was in 1865. One hundred years later in 1965, the Selma march was about getting that long promised right to vote – but as a cornerstone step to equality and justice.

As we enter 2015, these concepts are suddenly even more topical and SELMA is a great construct to further thoughtful discussion. Seven years in the making, few could have anticipated how relevant this movie would be.

Underscoring the timeliness and impact of this film, a number of individuals and families in Connecticut have personally contributed funds to purchase a minimum of 8,000 tickets; similar efforts took place to make tickets available for students in the Westchester, NY area. These tickets will be available at participating theaters for CT and NY students in the 7th through 9th grades to see the film SELMA for free starting Friday, January 16th through Monday, January 19th. This was an unprecedented, unified decision to share an important cultural transformation with the next generation on a highly relevant topic.

For many students this will be their first and perhaps main exposure to Martin Luther King Jr., Selma, and the courageous band of men and women that changed a nation. We can all learn from this struggle for human dignity.

Eligible students can attend any show time at participating theaters and need only bring their Student ID  or Report Card as proof of their 7th to 9th grade status. 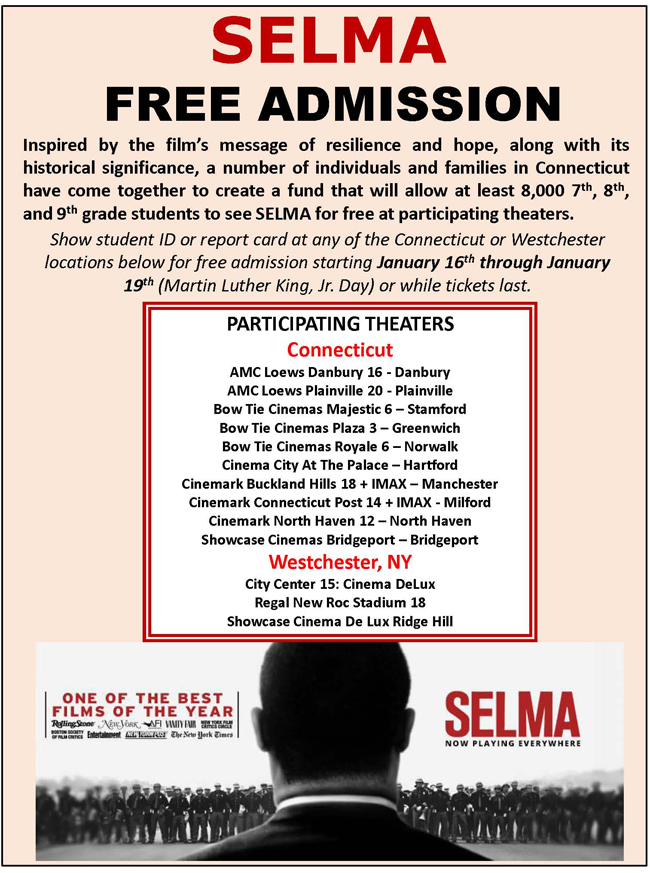