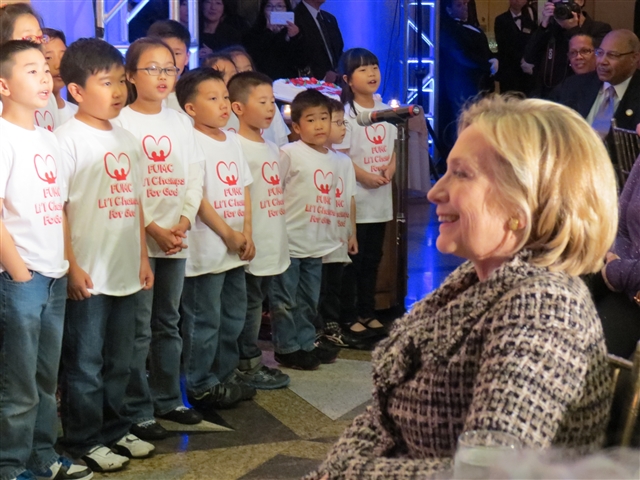 The children's choir of First UMC in Flushing perform for Hillary Rodham Clinton at the 175th anniversary celebration of the United Methodist City Society. Photo by Joanne S. Utley

A daring group of 19th century Methodist women who ventured into the most notorious slum in New York to change the lives of children set an example that all United Methodists can follow, says Hillary Rodham Clinton.

The founders of what is now the United Methodist City Society were responding to injustice, but “also motivated by a vision of what could be,” she pointed out.

Clinton was the keynote speaker Nov. 3 for the City Society’s celebration of “175 Years of Mission in the City” at Terrace in the Park in Queens. The estimated 680 participants reflected the diverse New York immigrant communities the society has supported throughout its existence.

During the same weekend, Clinton’s former colleague, New York Sen. Chuck Schumer, was urging her publically to run for president in 2016. But politics was not the topic for this event, where the recently retired U.S. secretary of state was warmly welcomed as a fellow United Methodist who is candid about her faith and about her own concerns about the world’s women and children.

She was invited by the Rev. William Shillady, the City Society’s executive director, who served as a co-officiant at daughter Chelsea Clinton’s wedding, and took part in the memorial service for Hillary Clinton’s mother, Dorothy Rodham, two years ago.

Chelsea Clinton, who attended Park Avenue United Methodist Church in Manhattan when Shillady was pastor there, was in Norway with her father, Bill, on Clinton Foundation business and not present at the celebration.

In a video introduction for her mother, she called the Methodist women who worked in the tenement slums of lower Manhattan, “an inspiration to me and so many others” and said their dedication also reminded her of her mother’s devotion to the empowerment of women and children.

Those women, who organized the New York City Sunday School Society of the Methodist Episcopal Church in 1838, set up “charity schools” in the Five Points neighborhood to evangelize and educate poor children.

By all historical accounts, Five Points — colorfully depicted in “The Gangs of New York,” Martin Scorsese’s 2002 fictional drama — was a wretched place. “It was said to be an area controlled by gang members and criminals of all types,” Susan Kim, a City Society board member and president of New York Annual Conference United Methodist Women, told celebration participants.

Logo designed for the City Society’s celebration of “175 Years of Mission in the City.”

That notoriety did not dissuade them. “The Methodist women came to the worst slum known internationally and demonstrated the power of their religious faith,” she said. “They saw God’s love as the primary agent of the reformation of the city.”

Jacob Riis, a Danish immigrant who came to New York in 1870, recognized the Methodist women’s work as he documented the terrible living conditions in the Lower East Side neighborhoods of Manhattan, particularly for children. As a photojournalist, his book, “How the Other Half Lives,” helped bring about many reforms in housing laws.

“A handful of noble women, who braved the foul depravity of the Old Brewery to rescue its child victims, did more than any legislature or city council could achieve,” he wrote about the women. “Sixty thousand children have been rescued by them from the streets and had their little feet set in the better way.”

From those beginnings, the New York City Society of the Methodist Church was born, eventually merging with similar societies in the region dedicated to social support and reform.

The City Society also provides grants to churches for feeding programs, soup kitchens and after-school programs and loans for capital projects. The $120,000 raised from the 175th anniversary celebration will underwrite grants for the 2013 budget, Shillady said.

Clinton’s own Methodist roots go back several generations. When John Wesley, the founder of Methodism, sent his followers out, “they were talking to people like my great-great grandparents….people who had been marginalized and left out,” she said.

Growing up in Park Ridge, Ill., her family’s active involvement with First United Methodist Church there “was such an important part of our lives,” she told the crowd. She feels blessed, Clinton said, to have had the church’s influence on her life.

As the nation’s first lady, Hillary Clinton spoke before the 1996 United Methodist General Conference, the denomination’s top legislative body. At that time, she urged the church to continue its social witness for the world’s children and cultivate “a new sense of caring” about its responsibilities to the larger society.

Just as the Methodist women had the confidence, conviction and faith to reach out in Five Points long ago, Clinton suggested to celebration participants that it may be time to increase denominational efforts to bring faith “to those who may not yet have had the chance to believe” and follow in the footsteps of these pioneers.

At a time of seeming disconnectedness and insecurity in society, “we have a great gift to offer,” she added. With discipline and a set of beliefs, “we have an understanding of how to get things done.”

After the event, Shillady pointed out that recapturing Methodism’s “early spirit of social holiness and concern and compassion for our communities” could help with church growth. “Maybe our churches need to look outside their walls, as did those early Methodist women,” he said.

The City Society expects to post a video of the anniversary celebration and Clinton’s keynote address on itswebsite in the near future.