Celebrate the Life of the Honorable Nelson Mandela

Celebrate the Life of the Honorable Nelson Mandela 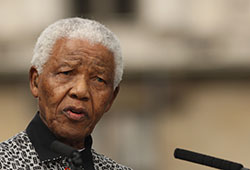 The world collectively pauses to celebrate the life of the honorable Nelson Mandela, founding president of a “democratic” South Africa. The President died today at the age of 95 after an extended illness. Known by his clan name Madiba, President Mandela provided the heavy lifting that bent the arc of the moral universe toward justice during the apartheid era of his beloved South Africa. In the midst of a post-apartheid South Africa, Madiba embodied the spirit of reconciliation as he guided his nation into the experience of freedom and full citizenship for all. This lawyer, activist, and Nobel Peace Prize winner will forever be mentioned along with Dr. Martin Luther King Jr. and Mahatma Gandhi as iconic freedom fighters. Despite having spent 27 years in prison, this great leader modeled "life after struggle" with dignity, class and a great sense of purpose.  This scholar and political genius influenced generations of leaders both in South Africa and around the world.

I encourage us to share the story of President Nelson Mandela, a transformational leader from our pulpits and in small groups over the next few weeks and beyond. Our prayers go out to his beloved surviving spouse Ms.Graca Macel, his children, former spouse Ms. Winnie Mandela and all of South Africa.  This great son of Africa leaves a legacy that we can all connect with as we seek to make this world a better place. ”It always seems impossible until it’s done.” Nelson Mandela.

Madiba talked the talk and walked the walk, may we continue to be inspired by his example.