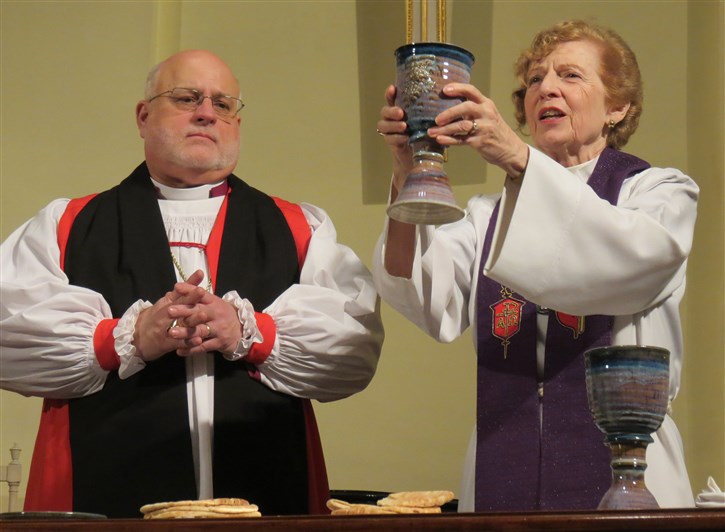 Episcopal Bishop Stacy Sauls, left, looks on as interim NYAC Bishop Jane Allen Middleton presides over Holy Communion during a shared Eucharist on March 3. In the photo below, Ann Wareham, a member of the John Street UMC reads from Isaiah 49.

By Joanne S. Utley
In celebration of the ecumenical bonds developing between two denominations, members of the United Methodist and Episcopal churches came together to share in Holy Communion early this month at the John Street UMC in New York City.
Some 50 people joined New York Area Interim Bishop Jane Allen Middleton and Episcopal Bishop Stacy F. Sauls in the worship service to commemorate the churches’ recent interim eucharistic sharing agreement. The John Street church was chosen for its historic significance as the “mother church of American Methodism,” and the date – March 3 – is celebrated as the feast day of John and Charles Wesley in the Episcopalian tradition.
For the past 10 years, the United Methodist and Episcopal churches have been in talks to deepen their expression and practice of Christian unity. This move toward “full communion” involves two denominations developing a relationship based on a common confessing of the Christian faith – it does not mean that the denominations will merge. This relationship involves the mutual recognition of members, of ordained clergy, and the sacraments; the joint celebration of Holy Communion/Eucharist; and a common commitment to evangelism, mission, and service. Both the UMC and Episcopal Church already share full communion with the Evangelical Lutheran Church in America, but not with one another.
In welcoming the gathering to the church he leads, Rev. Jason Radmacher noted that the early Methodists in New York were dependent upon the local Anglican parish for the sacraments. They would come to what was then the Wesley Chapel on John Street for worship, and then walk to St. Paul’s Chapel of the Trinity Parish to receive the sacraments.
That all changed after the American Revolution when the Methodists separated from the Church of England. The Methodist Episcopal Church was founded at the Christmas Conference of December 1784; the first proper Eucharist was celebrated at John Street in January 1785, with Bishop Thomas Coke presiding.
“May tonight help revive those ties that have lain dormant,” Radmacher said.
As he began his message, Bishop Sauls confessed that he, “like many Episcopal bishops,” had grown up as a Methodist.
“My mother would be very proud to see me standing in a Methodist pulpit tonight,” he said as the gathering responded in laughter.
Sauls, who is the chief operating officer for the Episcopal Church, explained that he had not come to talk about Christian unity, but about how the church is using the power and authority it has been given to fulfill the gospel of Jesus Christ. He said that the main problem before the church is not a crisis of authority, but rather one of “powerlessness.”
“We need to become powerless so that we can call upon the authority of God through the Holy Spirit,” he said. “The sooner we realize that, we will receive power over and above all our imagination.”
Sauls explained that the gospel comes as a surprise to many because the message of Jesus is found not in power, but in “our powerlessness.”
“The one thing we need to do tonight is to call on the help and inward power of the Holy Spirit,” he said. “We [Methodists and Episcopalians] are not called together because of what we can give one another . . . we’re called to turn to the needs of the world.” 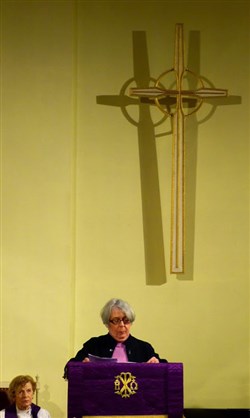 Following the sermon, Bishop Middleton, who began leading the New York Annual Conference on January 1, presided over the sacrament of Holy Communion. In a nod to the traditions of the two denominations, both grape juice and wine were served as part of the holy feast.
“It was a great joy for me and, I think, for everyone present to join together the best of both our denominations in the celebration,” Middleton said after the service. “I believe John and Charles Wesley would be very pleased to see that we’re in a special relationship of shared communion.” The Wesley brothers, though branded as the founders of Methodism, never intended to break from the Anglican Church.
The liturgists represented both laity and clergy from the two denominations: Nicholas Birns, a member of Grace Episcopal Church, and the Very Rev. Kurt H. Dunkle, dean and president of The General Theological Seminary of the Episcopal Church; and Ann Wareham, a member of John Street UMC, and Rev. Denise Smartt Sears, Metropolitan District superintendent of the New York Annual Conference.
After the service, the gathering enjoyed a time of fellowship on the lower level of the church that also houses its collection of 18th and 19th century church artifacts.
According to Rev. Radmacher, the 2016 General Conference plans to honor John Street UMC on the occasion of the congregation’s 250th anniversary. The church web site explains its history this way: the “John Street Church has been at witness for God’s love in the heart of New York City since our first worship service in 1766.  In nearly two and a half centuries of ministry we have served soldiers wounded in the American Revolution, investors who lost everything in the Great Depression, and a neighborhood devastated by the terrorist attacks of September 11, 2001.”
The dialogue concerning “full communion” will continue with the final decision to be made by the governing bodies of both denominations.
“My hope for future will be that our General Conference will indeed confirm the shared communion relationship in 2016,” Middleton said. The Episcopal General Convention will consider the matter two years later in 2018. 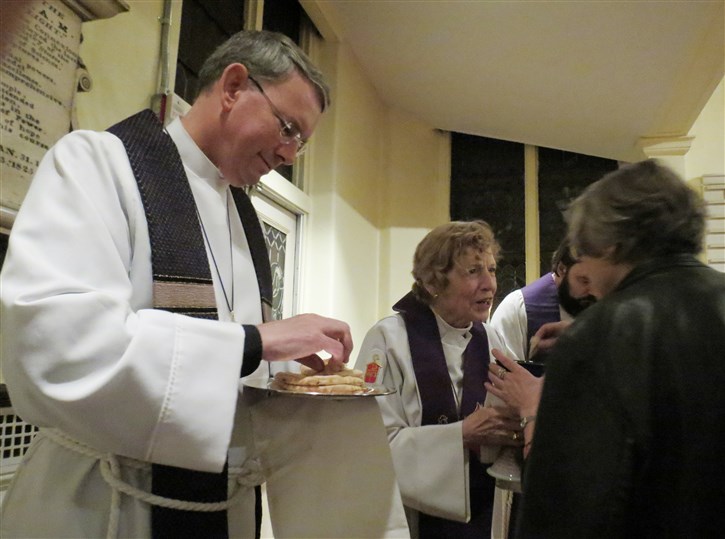