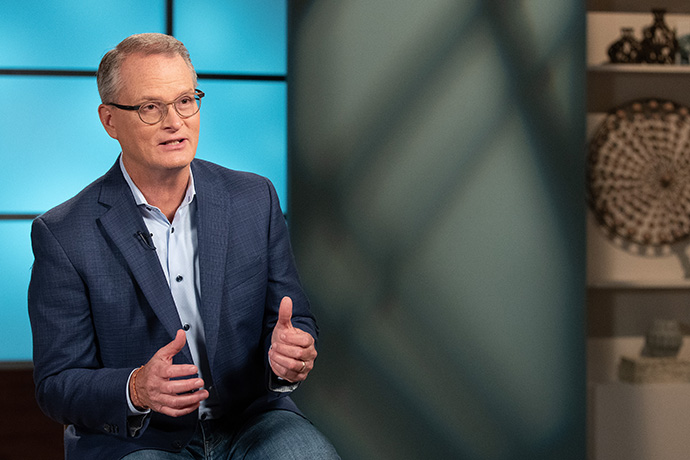 The Rev. Adam Hamilton, senior pastor United Methodist Church of the Resurrection, speaks about the pandemic and the proposed denominational split during an interview at United Methodist Communications in Nashville, Tenn. The church will host 2021 Leadership Institute on Sept. 29-Oct. 1 with a focus on helping pastors and laity address divisions in their communities. Photo by Mike DuBose, UM News.

• The United Methodist Church of the Resurrection will host its 2021 Leadership Institute on Sept. 29-Oct. 1 with a focus on helping pastors and laity address divisions in their communities.

• Ahead of this year’s gathering, UM News talked to the Rev. Adam Hamilton about how the church is handling the pandemic and the proposed denominational split.

• Hamilton, Church of the Resurrection senior pastor and a General Conference delegate, is no stranger to disputes in the wider church.

No question, these are challenging days for United Methodist congregational leaders.

For more than 20 years, United Methodist Church of the Resurrection has held its annual Leadership Institute with the aim of providing practical ministry tools to deal with church challenges. The multi-campus congregation, based in Leawood, Kansas, sits near the center of the United States and at the center of many of the crosscurrents affecting church life.

With U.S. political divisions, the strain of the pandemic and a proposed denominational split on the horizon, this year’s institute on Sept. 29-Oct. 1 focuses on helping pastors and laity serve as bridge-builders in their communities. The event will be both online and in-person.

Ahead of the institute, United Methodist News spoke with the Rev. Adam Hamilton, Church of the Resurrection’s senior pastor, about how the congregation has navigated COVID-19 and divisions in the wider society.

Hamilton — a prolific writer and General Conference delegate from the Great Plains Conference — is no stranger to divides within The United Methodist Church, especially over LGBTQ inclusion.

Below are video excerpts of an interview with Hamilton, along with more background on him and the Church of the Resurrection.

Video 1: Walking together in faith while disagreeing

The Church of the Resurrection is the best-attended United Methodist congregation in the U.S. It’s also a big-tent church where members have varied perspectives. The Rev. Adam Hamilton has been clear that he believes The United Methodist Church should end its bans on same-sex marriage and “self-avowed practicing” gay clergy, and leave such matters up to local congregations. But he knows not everyone in the church agrees. He speaks about how the congregation stays together amid heartfelt differences.

No one knew what to expect when COVID-19 forced churches around the globe to close their doors. Hamilton said the Church of the Resurrection also faced uncertainty but found ways to enlarge its ministry and grow in its reach. However, the surge in the delta variant has complicated the church’s plans for a big relaunch in the fall. As of August, the congregation’s in-person attendance was at 30% of its pre-COVID attendance. Hamilton describes how the congregation has responded during the pandemic and what a survey of the congregation found about people’s thoughts on coming back to church.

Churches are wrestling with what metrics are meaningful when online attendance appears to be booming but many pews are still empty. Hamilton talks about how Church of the Resurrection tries to track attendance as well as other measures of church engagement, including giving.

The Church of the Resurrection had been online for years before the pandemic, but Hamilton sees practices adopted during this season that the church will continue to carry forward.

Video 6: Thoughts on the protocol

The most-endorsed separation plan heading to General Conference, the denomination’s top lawmaking assembly, is the Protocol of Reconciliation and Grace Through Separation. If adopted, the protocol would allow traditionalist churches and conferences (those that support restrictions on gay marriage and ordination) to leave with church property and $25 million to form a new denomination. The proposal also sets aside $2 million for other groups of churches that might leave. Hamilton said a lot has changed since the protocol proposal was first unveiled in January 2020.

Video 7: Speaking out even when it comes at a cost

Many United Methodist pastors, for a variety of reasons, avoid denominational disputes. For years, Hamilton has been outspoken in his books, on the General Conference floor and from the pulpit about his belief that the church needs to be more inclusive of LGBTQ people. He talks about why he speaks out and why he remains United Methodist.

The Leadership Institute will be a hybrid event, with some meeting in person and most online. Hamilton spoke of how excited he is about this year’s speakers. They include Bob Goff, a New York Times bestselling author and founder of Love Does — a human rights organization that provides education in conflict zones. Other speakers include Savannah Kimberlin, director of research solutions for Barna; the Rev. Kevin Murriel, senior pastor of Cascade United Methodist Church in Atlanta; and Hamilton himself.