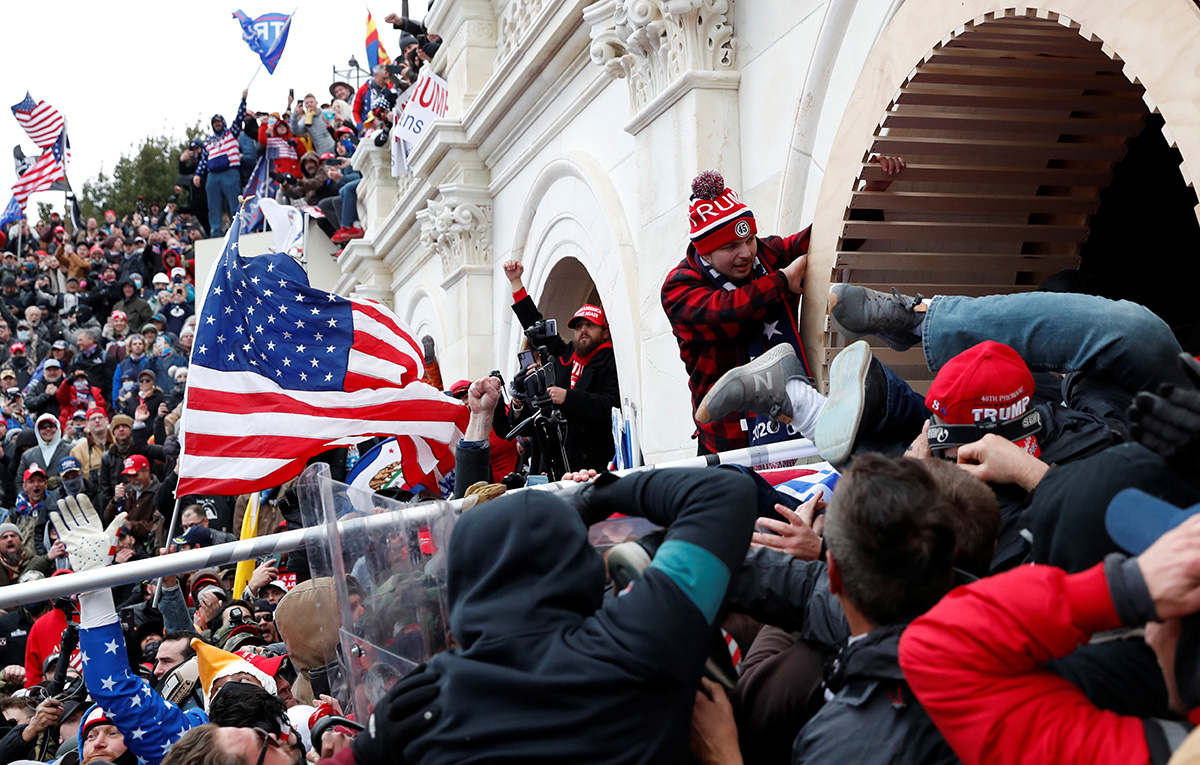 Supporters of President Donald Trump storm into the U.S. Capitol in Washington after clashing with police to protest the certification of the 2020 U.S. presidential election results by Congress on Jan. 6. Photo by Shannon Stapleton, REUTERS.


Throughout the evening of Jan. 6 and into the early morning, the Rev. Alisa Lasater Wailoo was texting with members of Capitol Hill United Methodist Church who were under siege at the U.S. Capitol.

The Capitol Hill church, at Fifth Street and Pennsylvania Avenue, is about five blocks away. Many members also live in the neighborhood and know someone who works at the building, the pastor said.

United Methodists both near and far were disturbed by the actions of a mob that forced its way into the U.S. Capitol as Congress was starting to fulfill its constitutional role by certifying the election of the next U.S. president.

“I am appalled by the reckless behavior of some political leaders since the election and by the lack of respect shown today for our institutions, our traditions and our law enforcement,” said former President George W. Bush, a United Methodist, in a statement.

“The violent assault on the Capitol — and disruption of a Constitutionally-mandated meeting of Congress — was undertaken by people whose passions have been inflamed by falsehoods and false hopes.”

"We see tonight in D.C. a symptom of what ails our nation, our world and even ourselves,” said the Rev. Melissa Early. “May we recommit ourselves to the work of forgiveness and may we recommit of work of abiding in the peace of Christ."

Eventually, lawmakers were able to return to the building, finishing the work of confirming the election of Joseph R. Biden Jr. as president shortly before 4 a.m. U.S. Eastern time Jan. 7. 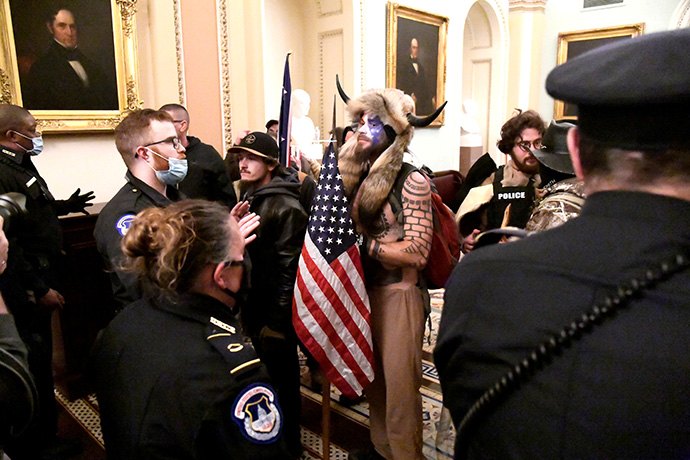 "Police confront supporters of President Donald Trump as they demonstrate on the second floor of the U.S. Capitol in Washington near the entrance to the Senate after breaching security defenses on January 6. Photo by Mike Theiler, REUTERS.


For those Wailoo and others had been concerned about, “everyone is home and safe, but the peace that was robbed from them yesterday is really significant,” she told United Methodist News.

“Part of what has so saddened me has been to watch our members who have given up so much to serve their country and have been dehumanized and villainized by this president. And we know that dehumanization eventually leads to violence.”

Wailoo said her church has both Republican and Democrats who are members. “We want to be a place that God brings us all together and we do intensive work to do that.”

But she added that challenging hate speech and lies, like those about fraud, is not about politics, it is about following the call of Jesus to speak the truth.

The actions of the mob grieved the heart of the Rev. Ianther M. Mills, senior pastor of Asbury United Methodist Church, who was born in the district.

“Never in my lifetime would I have expected anything like this to ever happen,” she said. “Of course, we are praying more vigilantly for order and peace. At the same time we are praying for ourselves.”

Asbury members were engaged in a 24-hour prayer vigil for peace with several other downtown Washington congregations when the violent disruption occurred. They already had hired private security because the church’s Black Lives Matter banner was torn down and burned in the street on Dec. 12 and a replacement banner was stolen over the Christmas weekend.

Denominational offices at the United Methodist Building on Capitol Hill have largely been closed because of the pandemic and were undisturbed by the demonstrators.

The Rev. Susan Henry-Crowe leads the United Methodist Board of Church and Society, which has its headquarters there. In a statement, she noted that “the peaceful transition of power is a pillar of representative democracy. Even as we affirm the right to peaceful assembly, nothing must disrupt this democratic process.”

The National Council of Churches also has offices at the United Methodist Building. “While we support nonviolent protests, and have often organized and participated in them, demonstrators desecrating the Capitol and disrupting our fair democratic process cannot be tolerated or go unpunished,” the council said in a statementreleased as events at the Capitol were unfolding.

The president of Wesley Theological Seminary, a United Methodist school in northwest Washington, spoke with emotion about the chaos on Capitol Hill.

“This is my front yard,” the Rev. David McAllister-Wilson, leader of the school since 2002 and an area resident for 39 years, said by phone. “Those grounds and the people that work there and in the agencies inside the Beltway are family and friends and our neighborhood.” 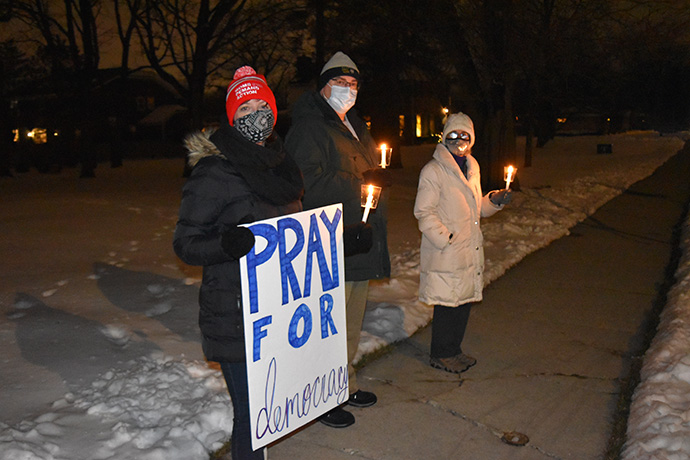 
In a statement posted on the seminary’s website, McAllister-Wilson called for prayers but also for phone calls to members of Congress to “cast shame on those, starting with President Trump, who have incited this violent insurrection.”

Wesley has had students serving in internships on Capitol Hill and members of Congress have served on its board, and the school’s proximity to the Capitol is a draw for many students, he said.

Some United Methodist members of Congress took to social media to say they were safe and to share their dismay at the tragic scene.

Rep. Greg Steube (R-Fla.) wrote on Twitter that he and three others were barricaded in a room surrounded by demonstrators until the hallway was clear for them to get out.

“The violence and lawlessness we saw today was completely unacceptable and as a nation, we must do better,” he wrote.

Baltimore-Washington Conference Bishop LaTrelle Easterling said the day’s events had prompted a watershed moment “to raise our voices to heaven and take stock of who we, as Americans, have become.”

“The rioters who climbed the steps and walls of the Capitol sought to overturn the law, a fair election and justice, and claimed their motivation was to defend God and their freedoms,” she wrote in a statement on the conference website.

“They waved banners emblazoned with the words, ‘Jesus Saves,’ but this is not what Emmanuel came to earth to embody. This is a perversion of the Gospel. This should drive all of us to our knees.”

The Gospel message, Easterling said, “is a message of love, but a love that speaks truth and stands against immorality.

“As a church, as Christians, we must condemn all the forces that led to the unprecedented insurrection today — forces of hate, of white supremacy, of distorted self-interest and abuse of power.”

The Rev. Jay Williams, pastor of Union (United Methodist) Church in Boston, was among African Americans in the denomination who saw a double standard in the police response on Capitol Hill.

Williams said that a Black Lives Matter protest aimed at invading the Capitol would have been met with a “swift clamping down” well before entry.

“But radical white extremists, who had planned in public and were incited by the president, can waltz into the Capitol on one of the most sacred days of our government,” Williams said.

A pastoral statement from Foundry United Methodist Church in Washington stressed the need to pursue “further accountability for the disparate response to peaceful protestors in the Summer of 2020 and for the daily indignities experienced by people of color in this city and beyond.”

Virginia Conference Bishop Sharma D. Lewis prayed “for all our leaders that they have wisdom, strength and composure to address our country’s problems” and cited the inspiring benediction of the Rev. Barry Black, U.S. Senate Chaplain.

In a closing prayer for the joint session, Black deplored the desecration of the Capitol building and called for healing from the violence and division, according to a New York Times story.

Bloom, Brown, Butler and Hodges are part of the UM News team.