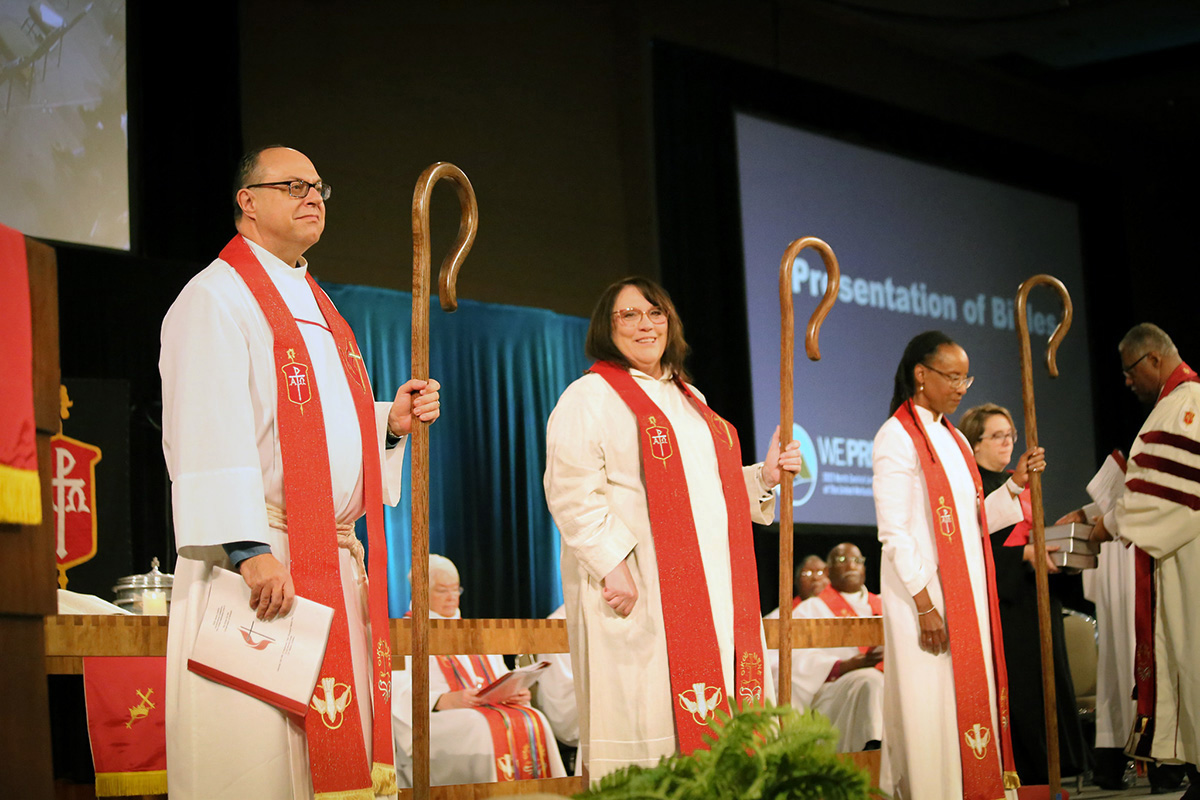 Unique to the North Central Jurisdictional Conference, 10 candidates for bishop recited a liturgy of solidarity and purpose before any votes were cast in the November elections.

“Even when the outcome is not what we’d hoped, even when seven of us return home to the communities and ministries that sent us instead of accepting new roles as episcopal leaders, we are already committed to celebrating with and for those elected,” said the Rev. Luis Felipe Reyes, one of the candidates and pastor of Sycamore United Methodist Church in Sycamore, Illinois.

It was part of a liturgy written by Bishop Lanette Plambeck, who was one of three bishops elected Nov. 2-3 at the Grand Wayne Convention Center in Fort Wayne, Indiana.

As it turns out, Reyes was not elected. Bishops Plambeck, Kennetha Bigham-Tsai and Dan Schwerin got the nod. But a month of weekly Zoom meetings made the process a positive experience, even for the seven candidates who weren’t selected.

“I actually enjoyed the process,” said the Rev. Curtis Brown, a candidate who returned to his job as director of connectional ministries for the Illinois Great Rivers Conference.

“I got to meet people. I got to talk about what I thought that God was calling our church to become. I got multiple opportunities to be invited to sit with significant leaders across our jurisdiction and talk about my hope for how the Spirit is bringing forth a new kind of United Methodist Church.

“And that was awesome.”

Retired Bishop Bruce Ough, who served from 2000 to 2020 and is now executive secretary of the Council of Bishops, was elected a bishop on his second try. He described the process as “difficult” and “stressful.” He thinks the jurisdiction’s candidate meetings were a good idea.

“They banded together for common support, to pray together and send a message internally to the candidates themselves and to others that their primary concern was about good elections taking place, rather than any one individual winning,” Ough said.

Brown said the effort was an attempt to “subvert the brokenness in the United Methodist system.”

God speaks through the votes cast in the elections, which are sometimes close, he added.

“That can create a sense of winners and losers,” Brown said. “One of the ways that we avoid that is in the way that we approach building connections of love and camaraderie. I think the more that our leaders can model that, the better our church will be, and the more we can represent the love of God for one another, the more we will see our decisions be centered around love and Christ's goals for us as the head of the church.

“That's my real hope in all of this.”

Brown initiated the Zoom meetings, said the Rev. Aleze M. Fulbright, a candidate who returned to her post as superintendent in the Central and West districts of the Indiana Conference.

“He and now-Bishop Plambeck coordinated all of us coming together, just to be in community with one another,” Fulbright said. “And Bishop Plambeck created the liturgy that we recited in front of the jurisdictional conference, just to take down the myths that we are competitors, and really bring about this understanding of being colleagues.”

The group met every Friday through October, Plambeck said.

The group also prayed about the economy, climate change, division in the denomination, racism and sexism, she added.

Bishop Dan Schwerin, who was only able to attended one of the Zoom calls, still found the process helpful.

“I'm happy that we made the relationships and I'm happy that we saw each other as not competitors, but as colleagues and seekers of discernment,” Schwerin said. “The reality of my workplace was that I only made one of them, but I was able to watch emails go back and forth, and that was valuable going into a meeting at Fort Wayne to see how all of us were opening up our lives and humbly trying to offer the church honesty.”

Brown said he wished to avoid a horse-trading scenario where political deals are made in an effort to win a bishop slot.

“If it is just about the politics and the vote count and ‘I'll vote for your person if you vote for my person’ — if that's all we're doing, it's a horrible experience,” he said. “But if what we're doing is being really committed to looking for the Spirit's discernment and we're really committed to being in conversation about our hope of what the church is going to be, then I think it's amazing.”

The politicking that Brown was trying to avoid led two other jurisdictions to interrupt their work to grapple with racism faced by some of their bishop candidates.

The Western Jurisdiction’s delegates voted to meet in a closed session to discuss the racism, sexism and homophobia experienced by some of its diverse group of episcopal candidates. Meanwhile, the Southeastern Jurisdiction adopted a resolution to have its committee on episcopacy create a task force to study the impact of racial bias in the nomination and selection process for bishop candidates.

While things were more harmonious in the North Central Jurisdiction, Fulbright acknowledged that those who weren’t elected may need some attention in the aftermath of the elections.

“It is stressful,” she said. “It makes you question many things about life and call and God.”

Plambeck said she continues to pray for the candidates who weren’t elected, but “returned home and continue leading in the ministry and in the places that sent them. … I think there's some healing that's needed. We've all seen people that ran for that episcopal office that never really recovered from not being elected. So you pray for that sort of restorative healing, that (the experience) does not impact their passion for ministry.”

The relationships and trust built during the jurisdiction’s Zoom calls will endure, Plambeck believes.

“You were able to see some of the strengths and graces and passions that each of the candidates had for various parts of mission and ministry,” she said. “There were good relationships that were formed. … That trust doesn't just evaporate after that conference.”