Bishop John K. Yambasu, the Resident Bishop of the Sierra Leone Area of The United Methodist Church, died in a road accident this morning (August 16, 2020) just outside Freetown in Sierra Leone.

He was on his way to attend a funeral service for Rev. Edward Kamara in Yonibana in the north of the country, according to Phileas Jusu, the director of communications for the Sierra Leone Annual Conference.

“Our hearts are broken, and we're devastated by this sudden departure of Bishop Yambasu. This is a great blow to the people called United Methodists! It is our hope and prayers that God will comfort the family in particular and The United Methodist family at large. May his soul rest in perfect peace,” said Bishop Samuel Quire of the Liberia Episcopal Area.

Bishop Yambasu was instrumental in bringing together a diverse group of representatives from United Methodist advocacy groups with contrasting views and bishops from around the world to collaborate on a proposed agreement for the separation of The United Methodist Church. 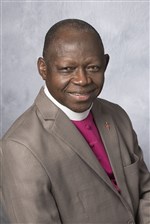 eement, the Protocol of Reconciliation & Grace Through Separation, was achieved on December 17, 2019, and announced early this year and will be considered at the next General Conference of the church set for 2021.

Bishop Yambasu was also president of the Africa College of Bishops of The United Methodist Church.  He was also the newly elected Chancellor of Africa University.

Born in southern Sierra Leone, Bishop Yambasu studied at United Methodist mission schools. He was ordained a deacon in 1987 and an elder in 1990. He served churches in Moyamba and Freetown until he began to focus on Christian education and youth ministry.

A graduate of Candler School of Theology in Atlanta, Bishop Yambasu taught in many schools, including the denomination's Harford School for Girls in Moyamba. He also was the Sierra Leone Conference's director for Christian education and youth ministries and founded the Child Rescue Centre in Sierra Leone, serving as its executive director until he became a regional missionary in 2000.

Bishop Yambasu is survived by his wife, Millicent, and their five children — Rebecca, Adima, John, Emmanuel and Elizabeth.