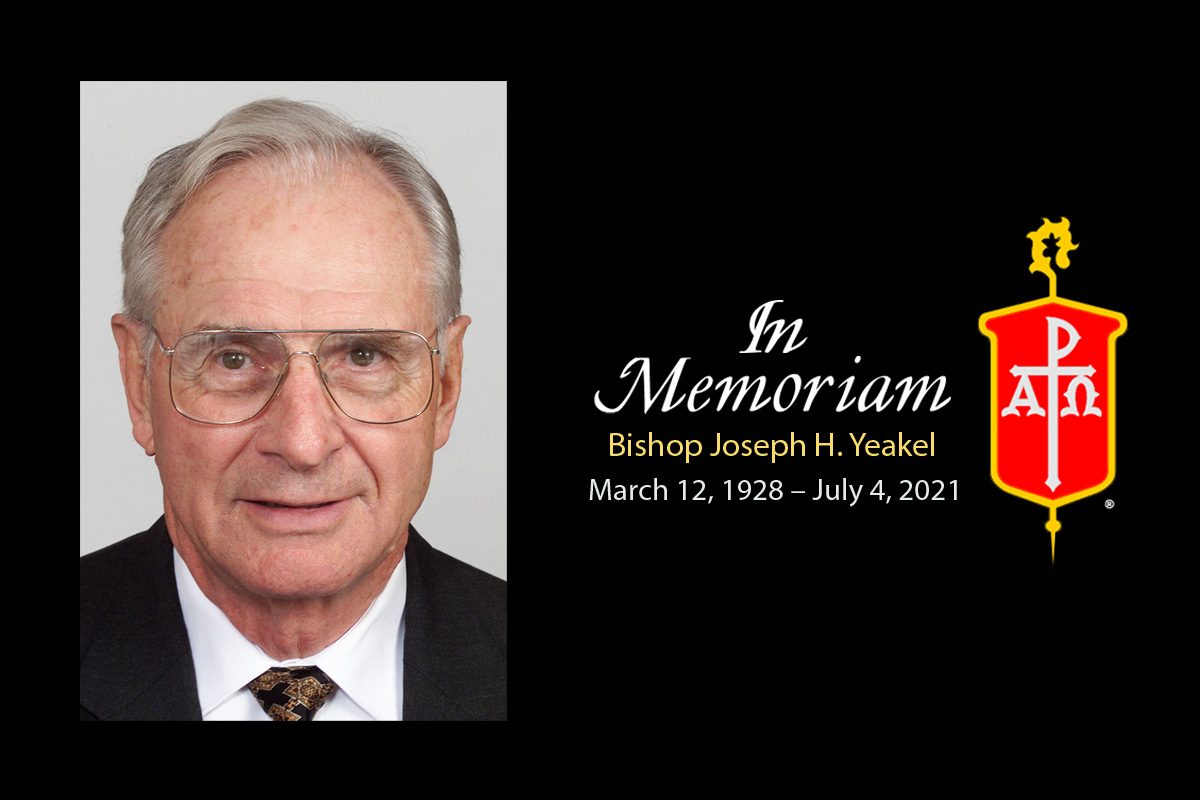 Bishop Yeakel, who came to the UMC from the EUB tradition and lead what is now Discipleship Ministries during the union that formed The United Methodist Church, died July 4 at age 93. Yeakel was a bishop of the Syracuse and Washington D.C. areas. File photo by Mike DuBose, UM News.

• Bishop Joseph H. Yeakel took on a variety of leadership roles, including Council of Bishops president, during a time of great change.

• As a leader in the Evangelical United Brethren Church, he also helped in the formation of The United Methodist Church.

• In his later ministry, he became an outspoken advocate for LGBTQ inclusion.

United Methodists remember Bishop Joseph H. Yeakel as a wise, caring leader who did not seek his own glory but instead sought to include others in glorifying God.

He also was not afraid of change.

“Bishop Yeakel was a voice for justice and was always one of the first to speak truth when it was most needed,” Council of Bishops President Cynthia Fierro Harvey said in a statement.

Harvey, who also leads the Louisiana Conference, described him as mentor to other bishops. “He was a kind and gentle spirit who always led with a voice of encouragement and steadfastness.”

Yeakel — one of Harvey’s predecessors as Council of Bishops president — died July 4 at age 93 with all five of his children by his bedside. He lived at Danbury Woods Senior Living Center in Wooster, Ohio.

At the time of his death, Yeakel had been a United Methodist bishop longer than any episcopal leader still living.

In his more than 70 years of ministry, he also led the church through a time of significant transition.

As head of the Evangelical United Brethren’s Board of Evangelism, he supported the EUB-Methodist union to form The United Methodist Church.

As the new denomination got under way in 1968, he and his family made the move from Dayton, Ohio, to Nashville, Tennessee, so he could head the new United Methodist Board of Evangelism (now Discipleship Ministries).

Four years later, the Northeastern Jurisdiction elected him bishop, and he and his family moved again. He first served the New York West Area, which includes what is now the Upper New York Conference, from 1972 to 1984. He next served the Baltimore-Washington and Peninsula-Delaware conferences until his retirement in 1996.

Yeakel did not seek out many of the high offices he achieved, said the Rev. Wilson Shearer, his friend of 68 years and a fellow pastor in the former Evangelical United Brethren Church.

“His election as bishop in 1972 was not at all a goal achieved, but simply a divinely inspired call to wider ministry in his covenant commitment,” Shearer said.

Still, he served where asked. As bishop, Yeakel quickly developed a reputation as an expert on the Book of Discipline, the denomination’s policy book, and church parliamentary procedure.

Shearer recalled a session of the 1976 General Conference, when Yeakel stepped up to preside after a fellow bishop got confused by the legislative assembly’s multiple points of order and amendments to amendments. In a matter of minutes, Shearer said, Yeakel untangled the various legislative maneuvers and helped the assembly get back on track.

People rushed up to compliment Yeakel after the session. Shearer said his friend replied: “Aw shucks, I didn’t perform any miracles. Everyone just started to behave themselves and cooperate.”

“There was never any instance when I saw him unprepared in advance, or incapable of meeting the need and responsibility that his leadership alone could supply,” Shearer said. “Of course, he made some mistakes along the way, but he learned from them.”

Joseph Hughes Yeakel was born March 12, 1928, in Mahanoy City, Pennsylvania. He was Presbyterian in his youth but after serving with the U.S. Navy Seabees, he graduated from then EUB-affiliated Lebanon Valley College and followed a call to ministry in the Evangelical United Brethren Church. He and his wife and ministry partner, Lois, married in 1948.

He earned his Master of Divinity from United Theological Seminary in Dayton, Ohio — which, like Lebanon Valley College, was then EUB and now is United Methodist. He also served as pastor of EUB congregations in Ohio, Pennsylvania and Maryland.

Even as bishop, Yeakel never lost sight of the common faith that makes all Christians siblings.

Retired Bishop William Boyd Grove recalled that his friend would often greet newly elected bishops with a quote attributed to Augustine, bishop of Hippo: “If then I am gladder by far to be redeemed with you than I am to be placed over you, I shall, as the Lord commanded, be more completely your servant.”

“Those words from another bishop, summarize for me, the legacy of Bishop Yeakel,” Grove said.

During his ministry, he saw some of the advancement of the first women with full clergy status as well as efforts to dismantle the Methodist Church’s racial segregation. Friends say he became a champion of both women clergy and racial justice.

Retired Bishop Susan Morrison was dean of the Baltimore-Washington Conference cabinet when Yeakel came aboard. She said he was not fixed on only doing things his way.

“I saw how he grew in understanding the issues surrounding clergywomen and watched him become one of our most ardent supporters,” she said. “He dealt with one of the earliest sexual misconduct cases in the general church. It had serious cultural implications, and he always would meet with the gatherings of strong opposition and listen and learn.”

“I read the Book of Discipline cover to cover and went back to him with questions,” Mooney said. “He was always there.”

Yeakel’s views evolved in another way. While a stickler for following the Book of Discipline, he came to believe that General Conference should end the Discipline’s ban on ordaining “self-avowed practicing” gay clergy. In 1996, he and Morrison were among 15 bishops who signed a statement making that case. Bishops do not have a vote at General Conference.

"Joe signed the Denver 15 Statement without hesitation when I asked," Morrison said, "even though he probably anticipated some of the negative reaction in the council that some of us from a different generation were surprised to encounter."

In the statement, he and the other signers pledged not to defy the Discipline. In 2004, he presided at the church trial of Irene Elizabeth “Beth” Stroud, who the year before had announced that she was a lesbian in a committed relationship. A jury of fellow clergy found that Stroud violated church law and voted 7-6 to remove her credentials.

Still, Yeakel’s view that the law should change persisted. In 2011, he was among 33 retired bishops who released a statement urging an end to the clergy ban.

The Rev. Frank Trotter, an openly gay retired elder who has served in the Baltimore-Washington and California-Pacific conferences, said he does not know if Yeakel’s growing advocacy helped change a single vote at General Conference.

“However, I do know from personal conversations that his ‘change of heart’ has meant the world to so many of my brothers and sisters in the years since,” said Trotter, a board member of the advocacy group Reconciling Ministries Network. “If Joe, the ‘uber-traditionalist,’ could change his mind, then there would always be hope that the denomination could do the same.”

Yeakel was distressed over the possibility that debate over LGBTQ inclusion could lead to a denominational split after his work to bring the denomination together. Nevertheless, he maintained his advocacy.

In his latter years, Yeakel cared for his wife in her struggle with Alzheimer’s. She died on March 5, 2014, after more than 65 years of marriage.

“In our lives, God places people that are unforgettable,” said retired Bishop Marcus Matthews, who served on Yeakel’s cabinet and spoke about Lois Yeakel at the Council of Bishops memorial service. “One of those people in my life was Bishop Joseph Yeakel. He holds a special place in our family’s heart.”

He has donated his body to the Cleveland Clinic for medical research and education. A service of faith and memories will be held later this year.