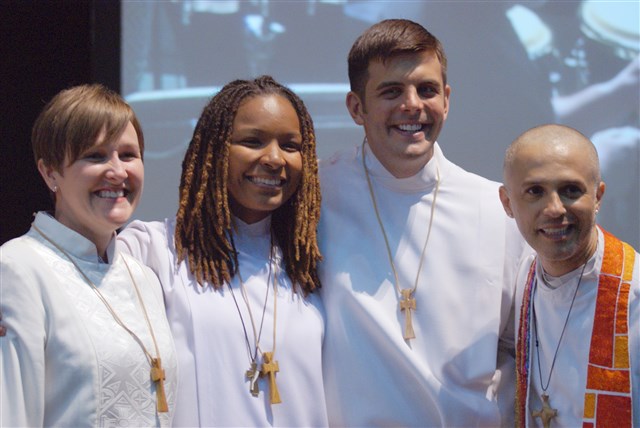 The Judicial Council's October docket contains questions related to the church rules on homosexuality including a review of the New York Conference decision to commission and ordain four openly gay clergy. Lea Matthews, from left above, Elyse Ambrose and Bruce Lamb were commissioned as provisional deacons or elders; Alex da Silva Souto was ordained as a full elder.

Two bishops, in separate rulings, have voided two resolutions in the Northeastern United States that called for defying church restrictions on gay and lesbian individuals.

Bishop Sudarshana Devadhar, who leads the New England Conference, ruled much of the conference’s “non-conformity” resolution in violation of the Book of Discipline, the denomination’s law book. The conference adopted its “Action of Non-Conformity with the General Conference of The United Methodist Church” at its June 17 session by a vote of 445 to 179 with a handful of abstentions.

Bishop Mark J. Webb of the Upper New York Conference struck down a Northeastern Jurisdiction resolution as a violation of the denomination’s law and constitution. That resolution, adopted July 14 at the jurisdiction’s meeting, asked conference finance committees to say no funds were available for church investigations and trials related to homosexuality.

The rulings come after a summer where multiple conferences in the United States passed non-binding resolutions urging United Methodists to ignore the Book of Discipline’s bans on same-sex unions and “self-avowed practicing” gay clergy.

However, none of those resolutions faced formal questions of law. In the case of the Western Jurisdiction resolution, a bishop initially ruled the proposal out of order. Delegates modified the language before it passed.

Bishop Grant Hagiya did face a question of law about a resolution supported by the Oregon-Idaho Conference clergy session, which said the clergy commit “to participate fully in the ministerial covenant with our colleagues of all sexual orientations and gender identities.”

Hagiya, who now leads the California-Pacific Conference, ruled that the clergy resolution was aspirational in nature. The bishop asserted that welcoming all candidates is not a statement against the Discipline, according to minutes from the clergy session.

Bishops’ rulings of law automatically go for review to the Judicial Council, the denomination’s equivalent of the U.S. Supreme Court.

The New England resolution is already on the church court’s October docket, while the Northeastern Jurisdiction and Oregon-Idaho rulings will not be heard until the court’s April 2017 session at the earliest.

The Judicial Council already has scheduled for its April meeting the South Central Jurisdiction’s questions related to Oliveto’s election.

However, the court’s October docket contains other questions related to the church rules on homosexuality. These include a review of the New York Conference decision to commission and ordain four openly gay clergy.

The Book of Discipline since 1972 has stated that all individuals are of sacred worth but the practice of homosexuality “is incompatible with Christian teaching.” A majority of delegates to General Conference, the denomination’s top lawmaking assembly, has consistently voted to keep that language and over the years has increased restrictions related to homosexuality.

However, it’s clear that not all United Methodists agree. In recent years as more countries have legalized same-gender marriage, more United Methodists have openly defied church prohibitions regarding how the church ministers with LGBTQ individuals. The initials stand for lesbian, gay, bisexual, transgender and queer or questioning.

In his ruling, Devadhar acknowledged that his decision of law was “a painful one to make.”

“As a United Methodist Bishop, I cannot challenge what I believe to be an unjust law by approving an illegal law,” he wrote.

The Rev. Will Green, a sponsor of the New England Conference resolution, spoke with gratitude that his bishop allowed conference voters to discuss and act on the proposal at all.

“Of course it’s out of order. That was the point of it,” said Green, a provisional elder and pastor of Ballard Vale United Church in Andover, Massachusetts. “I think it’s great that he knew exactly what we were doing, and he knew what he was required to do according to his job, and he still let us make our own decision.”

He added that a number of United Methodists have violated parts of the Discipline they see as discriminatory. “The change here is we are being honest about it,” said Green, who is openly gay.

The Rev. Don “Skip” Smith, pastor of Berwick United Methodist Church in Berwick, Maine, opposed the conference’s resolution and announced after its passage that he felt so strongly that he needed to leave the meeting.

Smith, a local pastor, remains in ministry in the conference, and he commends the bishop’s ruling. However, he said the conference’s vote should not have happened in the first place.

“No matter which side of the human sexuality question you fall upon, we ALL joined The United Methodist Church knowing about and agreeing to the ‘set of norms’ as outlined in our Book of Discipline and Social Principles,” he said by email.

“Yet here, as in several other conferences, despite all of these agreements and commitments, people have chosen to blatantly ‘non-conform,’ even making others feel like they are not welcome or ‘not as Christ-like’ because they are not joining the non-conformists.”

While the bishop was not supportive of the United Methodist position on these matters, Devadhar “acted with integrity in this instance,” Lambrecht wrote. “We wish all our bishops and clergy would exhibit similar integrity.”

Devadhar issued the decision because a conference member, the Rev. Michael Pike of Portsmouth United Methodist Church in Rhode Island, asked for a ruling of law during the annual conference session. Pike did not immediately respond to United Methodist News Service requests for comment on the bishop’s ruling.

The Northeastern Jurisdiction resolution faced a bumpier road to passage with the region’s bishops at various points raising concerns that the measure was out of order. It finally went through without a title.

Later, the Rev. Jeffrey Raffauf of the Eastern Pennsylvania Conference asked for a decision of law on the measure. Webb made the ruling because he was the presiding bishop when Raffauf raised the question.

Webb wrote that the resolution asked conference councils on finance and administration to disobey church law, and the statement violated the protections of fair process outlined in the denomination’s constitution.

“Restrictions on fair process funding would also substantially interfere with the constitutionally protected ‘privileges of our clergy of right to trial by a committee and of appeal,’ which cannot be abolished,” Webb wrote.

“We don’t want to be legalistic, but I think we need rules to live by to guide our conversation together so we can address these tough issues,” Raffauf said.

The Rev. Vicki Flippin of the New York Conference was one of the resolution’s proponents and publicly urged the Northeastern Jurisdiction’s bishops to be “out of order” with her and other supporters.

“Every one of us — from individual laity, to clergy, to congregations, annual conferences, jurisdictions and bishops — have a choice here,” Flippin said after Webb’s ruling. She is associate pastor at the United Methodist Church of St. Paul and St. Andrew in New York.

“Many of us have made the choice to be ‘out of order’ and to stand in nonconformity with laws that harm our friends, family and parishioners. And some, including Bishop Webb, have simply made different choices.”

Even as resolutions make their way through the church judicial system, United Methodists are looking for ways to remain one church despite differing views of homosexuality and what the Bible says about it.

With rumors of schism in the air, the most recent General Conference opted not to vote in plenary on any legislation related to how the church ministers with LGBTQ people.

Instead, the assembly authorized the Council of Bishops to set up a commission to examine and possibly recommend revisions to each policy related to sexuality. For now, many United Methodists across the theological spectrum are waiting to see what the not-yet-formed commission will do.