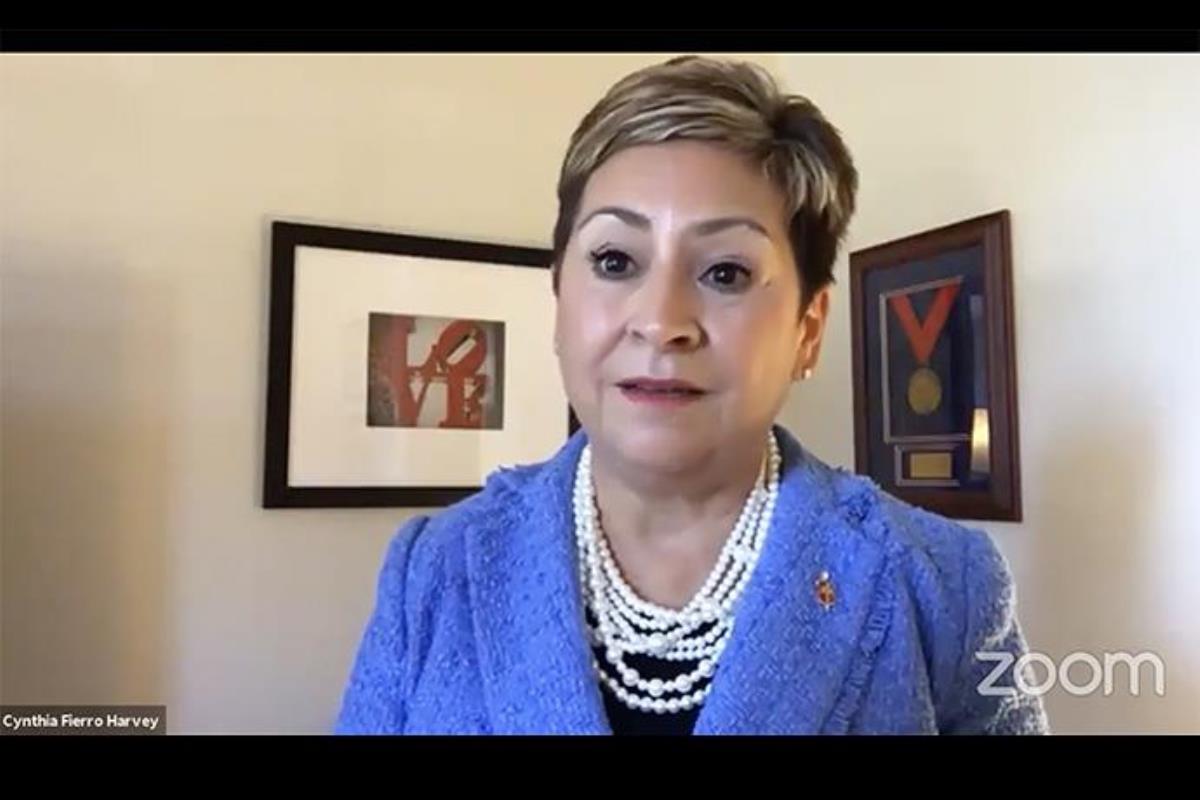 Bishop Cynthia Fierro Harvey gives the presidential address during the fall online meeting of the denomination’s Council of Bishops. She told fellow bishops and others watching online that she envisions a future United Methodist Church where all have a home. UM News screenshot via Zoom.

Bishop Cynthia Fierro Harvey has some advice for United Methodists feeling anxious about the many uncertainties facing the denomination: Stay focused on the Great Commandment. “Let’s stop speaking ill of one another and creating even more confusion and more fear and more anxiety,” said Harvey in her third public address as Council of Bishops president. “Imagine a more loving way during this waiting period.”

She spoke Nov. 2 to her fellow episcopal leaders and other United Methodists watching online as the fall Council of Bishops meeting got under way. The bishops will continue to meet online over the next three days, reopening their discussions to public viewing on Facebook at 9 a.m. U.S. Eastern time Nov. 5.

Harvey — who also leads the Louisiana Conference — preached on Mark 12:28-34, in which Jesus says the two most important commandments are to love God and love neighbor.

“Can we imprint these words on our hearts?” she asked. “Listen, United Methodists everywhere: The Lord your God is one so love the Lord your God with all your passion and prayer and intelligence and energy … and love others as well as you love yourself.”

Committing to love God and each other is especially important, she said, when the denomination appears heading for a divorce.

After decades of intensifying disputes over LGBTQ inclusion, the denomination faces multiple proposals to separate along theological lines. The most endorsed of these plans would allow theologically conservative churches and conferences to leave with property and $25 million to start a new Methodist denomination.

However, the pandemic already has twice delayed General Conference, the legislative body that would make any final decisions on a separation plan. Safety concerns and travel restrictions may force another postponement of the international assembly, now scheduled Aug. 29-Sept. 6, 2022, in Minneapolis.

The bishops also have postponed bishop elections until after General Conference, and in the meantime, many have taken on additional areas as some of their colleagues retire.

In her address, Harvey said she was not called to lead the church through separation or disaffiliations.

But she added that it’s time to face reality. “Our big tent is having a little trouble holding up to the winds of change,” she said. “And in the midst of this windy season, we must work harder than ever before to honor and respect one another, making space for each other.” As the bishops began meeting, a group of United Methodists issued a public letter urging them to allow congregations that want to do so to leave with property now — rather than wait for General Conference. As of early Nov. 3, nearly 500 church members from around the globe had signed the document.

Harvey’s presidential address did not specifically mention the letter. However, she encouraged her fellow United Methodists to use this time well — with or without General Conference.

The bishops plan to use their meeting to discuss their hopes and plans for The United Methodist Church that continues after any departures.

Harvey said she hopes to see a church that receives and honors all God’s children — of all ethnicities, races, gender identities and sexual orientations.

“And I want to say boldly, loudly and clearly: I envision a future United Methodist Church where all of you will have a home,” she said.

“If you consider yourselves liberal or evangelical, you’ll have a home. If you see yourself as progressive or traditionalist, centrist or conservative, center right or center left, you will have a home in the future United Methodist Church for, you see, that is what I believe the Kingdom of God looks like.” For the bishops, part of working toward a church where everyone has a home involves continuing the denomination’s efforts to dismantle racism begun last year.

During the Nov. 2 session, the bishops heard accounts of how racism is not just a problem of the past but something the church wrestles with today.

The Rev. Chenda Innis Lee, the daughter of retired Liberian Bishop John Innis, was an associate pastor at a predominantly white United Methodist church in Virginia when she began receiving anonymous letters complaining about her earrings and clothes. One letter ended, “Your messages are excellent. If you could become one of us figuratively, our relationship will be much better.”

Lee wrote the Council of Bishops, urging them to provide cross-cultural and diversity training not only for clergy but also for congregations.

The bishops also watched a video by the Rev. Hee An Choi, director of the Anna Howard Shaw Center at United Methodist-related Boston University. Choi spoke of being threatened by a man who told her to leave the U.S. She spoke about the rising incidence of violence against Asian Americans, including this March’s shootings in the Atlanta area that left eight people dead, including six Asian women. Choi urged the bishops to see racism as not just a problem between Black people and white people.

Finally, Bishop Leonard Fairley — who leads the Kentucky, Red Bird Missionary and North Carolina conferences — offered the indignities and tense times as a Black church leader trying to minister in mostly white communities. One incident occurred when as pastor he attended a church meeting at a local club. The woman at the front desk assumed he was the caterer.

He said his wife, Dawn, who is white, noticed how sales clerks followed the bishop closely in the store. The couple both noticed how different they were treated by a patrol officer at a traffic stop.

“It’s the small, subtle things that end up being the most painful of all,” Fairley said.

He told his wife he was used to these indignities. “I had to ask the Lord to forgive me for saying that because nobody should get used to it,” he said. “We’re the ones that we’ve been waiting on to deal with this.”

Bishop Cynthia Moore-Koikoi told those gathered that the bishops, alongside church theologians, plan to develop a theological framework for the ongoing anti-racism work.

The bishops plan to discuss the framework, which will include resources for sermons and Bible studies, at their spring meeting.

In the meantime, Harvey asked fellow United Methodists for prayer.

“Pray that the Holy Spirit will inform our every decision and help us lead out of love for one another and for you,” she said. “We must be a people rooted in Scripture, centered in Christ, serving in love and united in the essentials. Friends, our very best witness is to love each other.”

The bishops elected New York Conference Bishop Thomas Bickerton as the next president of the Council of Bishops.

The current officers are Bishops Cynthia Fierro Harvey, president; Bickerton, president-designate; and Malone as secretary. The new officers will take office at the end of the 2022 spring meeting of the Council of Bishops.

"It is very humbling to be asked to offer my leadership at this point in the church’s life and work,” Bishop Bickerton said after the election. “While the road ahead will no doubt present us with great challenges, I celebrate a faith which offers the firm assurance that God will provide us with the light we need to find the next step on the path." Read press release.

During their Nov. 2 session, the bishops also learned: The Rev. Susan Henry-Crowe, the top executive of the United Methodist Board of Church and Society, will preach at an ecumenical worship service Nov. 7 at Glasgow Cathedral as part of the United Nations Climate Change Conference (COP26). She and Church and Society staff members John Hill and Laura Kigweba James are attending the conference on behalf of the church. Learn more about the church and COP26.