Church hanging onto unity despite cracks in the walls

Church hanging onto unity despite cracks in the walls 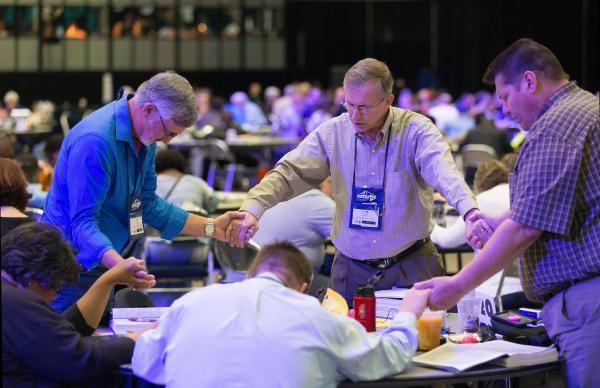 The Rev. Dan Bryant (center) leads fellow delegates from the East Ohio Conference in prayer May 17 following a speech by Bishop Bruce Ough in which he said the bishops are not supporting any plan for a split of The United Methodist Church during the denomination's 2016 General Conference in Portland, Ore.

Bishop Bruce Ough acknowledged the pain and anger that has been bubbling up at the 2016 United Methodist General Conference over the full inclusion of LGBTQ people, but said the Council of Bishops supports church unity.

Social media rumors before his announcement indicated the bishops were going to create a special commission to explore the church’s differences and hold a meeting in 2018 to discuss schism.

That is not correct, Ough said. However, he did say the bishops were not in unity with each other.

Ough pointed to human sexuality and the interpretation of Scripture as major obstacles. But he said “despair over the decline of the church in North America” also fueled the talk.

He also indicated the door was still open to "new and innovative ideas," perhaps even new structures. "We have risked exploring what many would consider radical new ideas," Ough said in confirming that the bishops had been meeting with both conservative and progressive groups.

“We remain in dialogue; so much of who we are is working, yet so much needs to adapt to new realities,” he said. “Come Holy Spirit and break through and set us free,” he prayed. “We belong to God and one another.”

In a press conference after his announcement, Ough said, “I think we are a church, for the most part, of the middle.”

Most people get up in the morning “and want to work for the unity of the church and to strengthen our witness.”

The Reconciling Ministries Network has been vocal during the 2016 General Conference that now is the time for the denomination to open its doors to the LGBTQ community.

"Separation conversations are not new, and at this General Conference, the idea has been pushed by conservatives who finally understand that fairness and equality for LGBTQ people in the church will not be silenced. While we appreciated the recognition of our struggle by the Council of Bishops today, we are discouraged by their refusal to meet this head on and bring peace and justice to all of us who serve this church," said Matt Berryman, executive director of Reconciling Ministries Network.

"Bishop Bruce Ough’s morning statement at General Conference should be applauded for its directness and its honesty, but it was also a cause for sadness and disappointment. His confession that the Council of Bishops is divided and unable to provide the leadership we need to be a united and vibrant church is another indication of how serious our dysfunction is."

Earlier, Good News indicated an agreement of confidentiality between the coalitions and bishops had been broken when reports started appearing on social media.

Ough said, “I don’t have a sense that confidentiality was breached.”

Looking for more than unity

She had expected more of a unity statement.

“That was just as much a statement of, ‘We’re open to what new ideas the General Conference finds, and we’ll support y’all,’ ” said Miles, an Arkansas Conference delegate and Perkins School of Theology professor. “So I was surprised.”

The Rev. Mike Slaughter, pastor of the megachurch Ginghamsburg United Methodist Church near Dayton, Ohio, heard Ough as saying the bishops do favor unity. That is his hope, too.

“But it’s got to be more than ‘continue the course,’” said Slaughter, a Connectional Table member and one of the large-church pastors who has had discussions with bishops about the denomination’s future.

Slaughter added that in his view, about 80 percent of the denomination get along well, but the 20 percent on one side or another ideologically and theologically are a large, disaffected contingent that don’t feel they’ve been dealt justly.

Of the prospects for unity, given that reality, Slaughter said, “It’s getting tougher.”

“It seemed the bishops were saying this is a legislative choice, not an episcopal choice,” said Chafin. “But then our legislative body doesn’t have anything to chew on, anything to process. At one level, it was passing the ball to us to do something, but then we have no means to really do it. So it just feels like more frustration.”

The Rev. Donna Pritchard is senior pastor of First United Methodist Church in Portland, the denomination’s largest church in Oregon, with 800 members.

“I would really like to believe that we could have a unity that is honest, respectful and inclusive of all persons. I am not at a point of trusting that we can,” said Pritchard, a General Conference delegate.

Too much harm has been done to LGBTQ people and to churches that are trying to be in ministry to be people in ways that are relevant to their context, she said. LGBTQ stands for lesbian, gay, bisexual, transgender and queer or questioning.

She said she agrees with Ough that the church has to be open to letting God lead it in reimagining a new way of being church.

The Rev. Forbes Matonga, of the West Zimbabwe Conference, said African delegates are solid in preserving church law that says the practice of homosexuality is incompatible with Christian teaching. For him, this General Conference has underscored the divide within the denomination he said.

“I see now we are almost headed for a split, unfortunately,” he said.

"This is my heartfelt conviction: that we are one church, one faith, and all embrace community in God's grace, and I continually pray for Wisconsin United Methodists for the Spirit of unity, of fully committed relationship with LGBTQ communities, and loving inclusion,” said Bishop Hee-Soo Jung.

Jung said he was calling for the “healing spirit” for all of us.

“Each of us found a home or [was] born into the Methodist family, and we cherish open dialogue, full inclusion and the sacred worth of every individual,” the statement reads.

Steve Furr, a lay delegate from the Alabama-West Florida Conference and president of the Association of Annual Conference Lay Leaders, favors unity and believes it can happen.

“It’s just a matter of what our will is,” he said.

“When we end on Friday, what’s going to happen on Sunday morning?” Ough asked. “We will be engaged in ministry.”

“We are all in this together. Make sure the narrative leads to a future with hope.”

Hodges and Gilbert are United Methodist News Service reporters. Contact them at newsdesk@umcom.org.