Commission on a Way Forward Optimistic of Future, Delves into Tough Task

Commission on a Way Forward Optimistic of Future, Delves into Tough Task 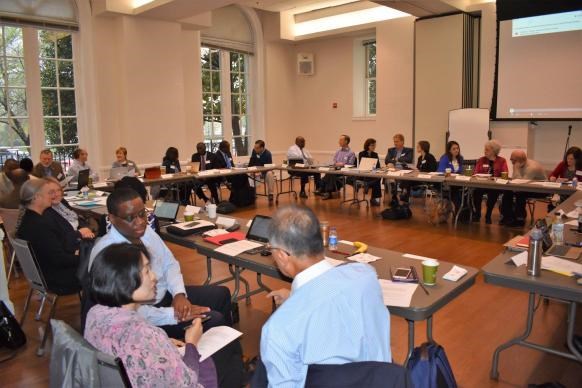 Members of the Commission on a Way Forward hold discussions in small groups during their meeting in Washington, D.C., April 6-8, where they began to consider possible outcomes of the task entrusted to them by General Conference. (Photo by Maidstone Mulenga)

WASHINGTON, D.C. - Members of the Commission on a Way Forward have expressed optimism at reaching consensus on a plan or plans to guide the Council of Bishops in leading The United Methodist Church into the future.

During the three-day meeting, April 6-8, at the United Methodist Building in Washington, D.C., the Commission members began discussing possible outcomes and timelines on accomplishing their task of examining paragraphs in the Book of Discipline concerning human sexuality and exploring options to strengthen the unity of the church.

Commission moderators Bishop Sandra Steiner Ball, Bishop Ken Carter, and consultant Gil Rendle provided guidance for the discussions. The Commission’s other moderator, Bishop David Yemba, was unable to attend the meeting due to events in the Democratic Republic of Congo.

Commission members indicated that they were leaning toward a simpler structure with clearer processes for decision-making and accountability for the church in its mission to make disciples of Jesus Christ.  In personal responses, the members showed that they were honoring the learnings of the Call to Action and a worldwide Book of Discipline. Conversations during the meeting indicated a commitment to finding a way forward that honors the complexity of the global denomination and the unity of a shared faith in Christ.

This was the third meeting of the 32-member Commission on a Way Forward, which was appointed by the Council of Bishops to assist the bishops in discerning a way forward on human sexuality in the denomination. The first two meetings were spent on building trust and community among the members, developing a covenant, a common language, and working in learning teams.

At the heart of the discussion at the meeting in Washington, D.C., was the struggle among the Commission members, who have diverse perspectives, experiences, and relationships with a wide variety of constituencies, to have a fresh understanding of unity and connectionalism.

One member, Myungrae Kim Lee, summarized the meeting in this way:

“We all spent difficult time together at this meeting. We laughed and cried together to create new possibility for our UMC. This is a necessary step we must pass through to direct ourselves to a new future of UMC. I believe that the Holy Spirit was with us.”

The members began the day on Thursday with acknowledging the election of one of their own to the episcopacy, Bishop Mande Muyombo, who was elected during the Congo Central Conference in March.  The group then was led in Bible study on Galatians 4 by Rev. Jessica LaGrone.

“As Christians, we tend to see God through a transactional model and we often like to earn our way into God’s good nature and love,” LaGrone noted, reminding the Commission of the need to focus on the relationship with God.

Following small-group conversations which focused on the question “How is it with your Soul?”, the Commission then heard from Texas Annual Conference Resident Bishop Scott Jones, the chair of the UMC Committee on Faith and Order, who discussed the document, “Wonder, Love and Praise,” which was approved for study by the 2016 General Conference.

“We are in a period of discernment, listening to feedback and asking if this reflects who we are. Our church does have doctrinal standards (Articles of Religion, Confession of Faith, General Rules, Wesley Sermons and Notes on the New Testament) and those doctrinal standards are supplemented by statements of the General Conference,” Jones noted.

Bishop Gregory Palmer, who is a member of the Commission and a former president of the Council of Bishops, led a conversation on the Call to Action, which was presented at the 2012 General Conference.

“Part of our productive work was naming what we saw at that time as the Adaptive Challenge moving forward: Redirecting the flow of attention, energy and resources to an intense concentration on fostering and sustaining an increase in the number of vital congregations effective in making disciples of Jesus Christ for the transformation of the world, “Bishop Palmer said. “I don’t think we could ever say we only have one adaptive challenge but I think this has currency in our time. “

After Bishop Carter reviewed the Anatomy of Peace document as a framework for engaging in the complex and, at times, conflictual work of the church, members began to discuss a draft of an outline of their initial report to Council of Bishops.

Since the work is global, the Commission members discussed ways of informing annual conferences around the globe about their work through videos, listening sessions, and collaborating with groups and organizations with vested interest in the participation of LGBTQ persons in the UMC.  The members agreed to decentralize the listening sessions regarding groups from Africa, Europe and Asia since human sexuality is understood differently in various parts of the world.

LaGrone also led a time of sharing and discussion around the recent academic theological colloquy, “The Unity of the Church and Human Sexuality: Toward a Faithful United Methodist Witness,” held at March 10-12, 2017 at the Candler School of Theology, Emory University, in Atlanta, Georgia. Several members of the Commission attended.  Bishop Carter said the original purpose of the colloquy was to align the work with the Association of United Methodist Theological Schools and the General Board of Higher Education and Ministry.  “We respect the foundational work of many of our scholars and we asked them to reflect on questions related to our work.  I urged them to be constructive and help us to seek unity and a way forward.”

The work on Friday began with a greeting from General Board of Church and Society General Secretary Rev. Dr. Susan Henry Crowe, who welcomed the Commission to “the UM space here on Capitol Hill, where we promote, educate and engage the substance of the Social Principles.” She said her agency’s priorities are health, immigration, poverty and peace.

Bishop Mande conducted the Friday Bible Study using Galatians 5. He noted that the radical notion in this passage is that “far before we arrive with moral perfection, the gift of God comes to us in such a way that allows us to show up without any claim to anything but ourselves.  Any claim to figuring it all out or knowing anything, falls away with the grace that comes freely.”

After Bible Study, the group began by discussing a list of many of the currently and popularly discussed options related to LGBTQ identity and the unity of the church.   Bishop Carter reminded the group that this was not an exhaustive list nor did it offer exhaustive descriptions. “We may see the world through these lenses.  Many of the plans often discussed in social media, for example, were created not by global groups but by leaders within the USA.  Sometimes language can tend to flatten things and we use a term that labels someone or puts them in a box.”

Gil Rendle asked the members to be open to learning together in new ways, as these plans were presented to address a problem within the church. He reminded the Commission that they have a task of finding a way forward for our church.

Generally, there was a sense of willingness to learn more about all the various proposals, their strengths and weaknesses, in order to inform the work of the commission and to prepare for the deliberations and questions of the General Conference.

Rendle then led a discussion of centralization and decentralization, complexity and simplicity.  The Commission did some work on its own vision for the future church’s mission and structure.  There is within the membership of the Commission a desire for some loosening of structure (or giving each other space), honoring differences, and yet finding a clearer consensus on matters of theology and doctrine.

On Saturday, the Bible Study was conducted by Bishop Rosemarie Wenner on Galatians 6, noting that if we live by the Spirit, let us also be guided by the Spirit and that there was a difference between being led by the Spirit and being guided by the Spirit.  “Carrying one another’s burden means we live together for restoration. Restoration is different than punishment or separation.  Restoration does not mean you don’t take seriously who we are and what we are doing.  It means you journey together, engage with one another in the Christian spirit of faithfulness and trust, reminding one another what we learn from God.  The Holy Spirit, the Spirit of gentleness, is meant to restore relationship.”

The end of the meeting brought the formation of some new teams: a Writing Team and an Equipping Team, along with task teams to engage work on unity and Central Conference matters.

Bishop Steiner Ball offered the closing devotion based on Colossians 3:12-17 with the reminder to the members of the Commission that “forgiveness is needed when we get off track and we fail to make the choice to live by the Spirit. It is not all easy going.  There is wrestling in this intentionality.  There is a wrestling to be able to forgive.  Forgiveness is not all about what we do for someone else.  Forgiveness also opens us up to the healing power of God and enables us to work from a heart of peace.”

She asked them to have thankfulness and gratitude as they go away from this meeting and that in word and in deed, “whatever we do, we do it in the name of Jesus Christ.”