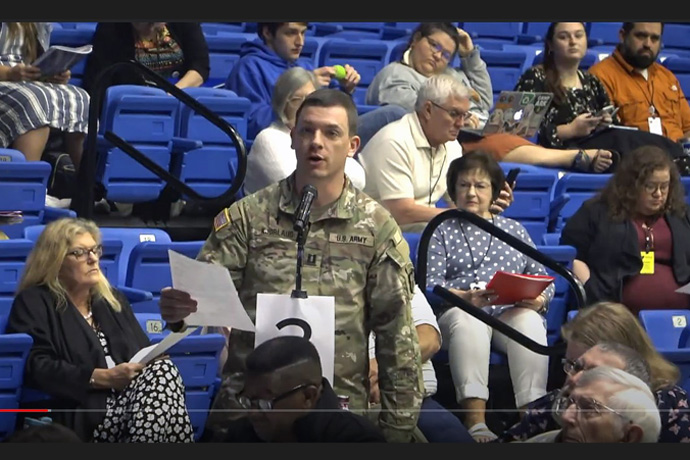 The Rev. Andrew C. Kjorlaug, an Arkansas Conference elder and U.S. Army chaplain, presents a resolution at the Arkansas Annual Conference that calls on the state’s congressional delegation to act on “Responsible Fire-Arm legislation.” In a year that has seen multiple mass shootings, Arkansas was among a number of United Methodist conferences urging elected leaders to do more to regulate guns. Screengrab courtesy of the Arkansas Conference via YouTube by UM News.

Days after a gunman killed 19 children and two teachers in Uvalde, Texas, United Methodists in the Arkansas Annual Conference had a message for their elected leaders. Do more than offer thoughts and prayers.

“Now, therefore be it resolved, the Arkansas Annual Conference, call upon the Congressional Delegation from the State of Arkansas to support and act upon Responsible Fire-Arm legislation,” said the June 3 resolution that Arkansas Conference voters passed 390-130.

The Arkansas Conference was not the only such United Methodist body to push for increased gun-safety regulations. More than a dozen other annual conferences across the United States have taken similar public stands to address gun violence.

The denomination’s annual conferences each consist of multiple congregations and other ministries in a geographical area, and, as the name implies, they typically meet at least once a year to worship and conduct church business.

Voters at annual conference sessions also often adopt resolutions that give a sense of how they hope to apply their faith to current challenges. Half of conference voters are laity and half clergy.

This year, church business at most conferences has been anything but business as usual. Conferences are grappling with both rising tensions around biblical interpretation and LGBTQ inclusion as well as mounting congregational disaffiliations following the launch of a breakaway denomination that came about in part because of those tensions. More than a dozen annual conferences, including Arkansas, have scheduled special sessions to consider church departures.

Amid these struggles, conferences across the United States still have found areas where they can bear a common public witness.

This year, multiple conferences joined to take on gun violence. Their message to their elected leaders: Enough is enough.

The United Methodist votes followed a series of horrific mass shootings across the U.S. this year. Less than two weeks before the brutality in Uvalde, a gunman killed 10 people in a racism-fueled mass shooting at a Buffalo, New York grocery store, and another gunman killed one person and injured five others in an attack on a Taiwanese Presbyterian church in California.

The slaughter has directly touched the lives of United Methodists. In Buffalo, church members lost family and close friends in the attack. In Uvalde, a Methodist Healthcare System team from San Antonio traveled to provide counseling in the traumatized community.

The Rev. Andrew C. Kjorlaug, an Arkansas Conference elder and U.S. Army chaplain, was thinking of ways to address the violence he saw on the news when he decided to propose a resolution at his annual conference — then set to open in just hours.

“At its heart, my resolution is calling for us to stand up for those who have little voice in society: children, the poor, ethnic minorities and others,” he told UM News through email. “The church calls people into community, and those communities need to be safe.”

The people of Arkansas are no strangers to the horror of school shootings. In introducing his resolution, Kjorlaug recalled when in 1998, two armed boys killed four of their classmates and a teacher at Westside Middle School in Jonesboro, Arkansas.

Kjorlaug said his friends in other annual conferences as well as the Cumberland Presbyterian Church’s General Assembly soon shared versions of what Arkansas had approved.

The Desert Southwest Conference, which encompasses Arizona and southern Nevada, passed a resolution designating its meeting spaces and its local churches as “gun-free zones.”

The Rio Texas Conference, which includes Uvalde, joined in a letter calling on “elected governmental representatives at every level to put the common good above the interests of partisan disagreement and to cooperate on passing measures that will effectively protect our communities from gun violence …”

Rio Texas Bishop Robert Schnase and his cabinet released the letter in English and Spanish. As of June 15, 365 United Methodists in the conference had signed it.

The Holston Annual Conference, comprising eastern Tennessee as well as parts of Virginia and Georgia, addressed the rise in gun violence not in a document but in a prayer that called for more than prayer.

The city of Chattanooga, Tennessee, had experienced two high-profile shootings in the weeks leading up to the annual conference. Retired Bishop Richard Looney said that among the injured was the granddaughter of a United Methodist pastor.

“‘Thoughts and prayers.’ I’m almost sick in my stomach now when I hear those words from those elected to lead us,” Looney said, with many in the conference applauding in assent.

He then prayed, “Help us all to know how to involve ourselves politically to do something beyond our praying.”

The public pressure from United Methodists and others has already made an impact. In late June, the U.S. Congress passed and President Biden signed into law the Bipartisan Safer Communities Act — the most significant federal gun-safety legislation in decades.

The gun reform law, a compromise, includes money for school safety, mental health and incentives for states to provide a more comprehensive background check of 18- to 21-year-olds who want to buy guns. The new law also bars guns from anyone who is convicted of a domestic violence crime against someone they have a “continuing serious relationship of a romantic or intimate nature,” CNN reports.

Still, the law falls short of the measures sought by the Arkansas Conference and many other United Methodists, and the United States continues to see mass shootings and a rise in gun violence. Since most U.S. annual conferences sessions concluded this year, United Methodists also have responded after a gunman took the lives of seven people and injured dozens at a Fourth of July parade in Highland Park, Illinois.

More work needs to be done, Kjorlaug said. He noted with disappointment that none of Arkansas’ congressional delegation voted for the bipartisan gun-reform law. U.S. Sen. Tom Cotton, who is a United Methodist, opposed it.

“With that being said,” Kjorlaug said. “I do think it is very important for us as United Methodists to bear witness to the destructive power of gun violence in our communities.”

For a number of U.S. annual conferences, the sessions earlier this year are just the beginning. At least 14 conferences plan to have to have special sessions, starting this month, to deal mainly with church disaffiliations. Most of these sessions will be online.

Because of a surge in COVID cases earlier this year, the Upper New York Conference delayed its regular session to Oct. 6-8 this year. The session will be online.

Annual conferences hold regional gatherings around the globe that combine United Methodist worship and business. They also celebrate the licensing, commissioning and ordination of new clergy as well as clergy retirements.
Conferences also pass resolutions addressing a variety of social issues. Some examples from the 2022 gatherings include:

There are 53 conferences in the United States and 80 in Africa, Europe and the Philippines. UM News is posting annual conference reports as we receive them.
Read reports.