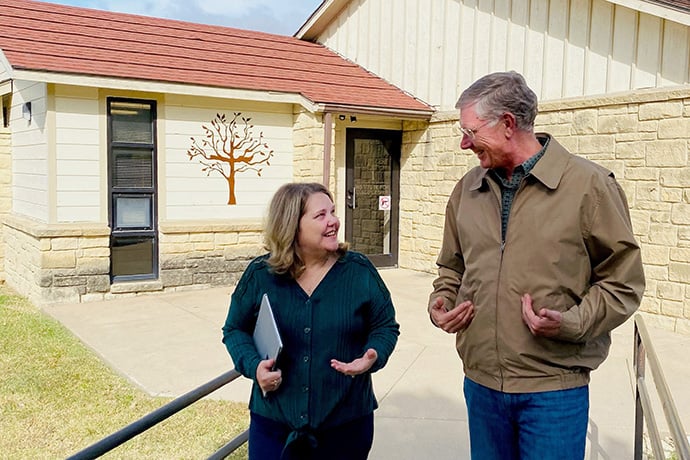 Lisa Buffum and Steve Wilke stroll the campus at The Richard and Julia Wilke Institute for Discipleship at Southwestern College, a United Methodist institution in Winfield, Kansas. They work on BeADisciple, an online learning program for Christians that became more popular during the coronavirus pandemic. Photo by Sara Weinert.

When she agreed in 2019 to take on a three-point charge in rural Maryland, Nan Duerling worried that she might have overreached. Her only experiences were in large, urban congregations.

“When (husband) Craig and I moved here from (Anne) Arundel County on the western shore of Maryland, we left a 1,000-member church,” said Duerling, who retired in 2017 as a freelance editor and writer for The United Methodist Publishing House after 33 years. She grew up in an even larger church, about 3,000 members.

A colleague from the Baltimore-Washington Conference, now retired Bishop Peggy Johnson, asked Duerling to temporarily take on three churches in the rural Neck District in Dorchester County, Maryland. Each has between 50 and 100 members.

“I was asked if I would do this on a short-term basis,” Duerling said with a chortle. “But I'm still there.”

Duerling turned for help to BeADisciple, an online learning program of The Richard and Julia Wilke Institute for Discipleship at Southwestern College, a United Methodist institution in Winfield, Kansas.

“I had already taken some BeADisciple courses … so I decided that I wanted to do the rural ministries certification,” Duerling said. “I needed what BeADisciple had to offer because I had no experience or academic training for what I was being asked to do.”

BeADisciple was chartered at Southwestern in 2001 to build on the educational legacy of United Methodist Bishop Richard Wilke and his late wife, Julia. It provides low-cost educational opportunities that build Christian communities, encourage small groups and offer high-quality theological content.

“We've been doing courses on laptops … for over 15 years,” said Steve Wilke, the son of the Wilkes and executive director of the Institute for Discipleship. “The unintended positive consequence of a pandemic was it turned more people to look for resources that didn't involve face-to-face contact.”

The roots of BeADisciple “come out of Methodism,” said Lisa Buffum, director of online education for the Institute for Discipleship.

“As our reach spread, we started to find other denominations. (Now) we have a huge umbrella.” In addition to the U.S., students from England, Australia, South America, Mexico and Germany have taken BeADisciple courses. By taking several courses with a particular focus, students can earn certification in lay servant ministries, congregational leadership, children’s ministry, evangelism, spiritual formation, Christian care and counseling, Christian education, rural ministry, ministry with people with disabilities, women’s ministries and more.

“BeADisciple as it exists today began as an idea in Steve Wilke’s visionary mind and one course with one instructor and a handful of learners in 2006,” Buffum said. “Since then, I have trained close to 300 instructors and, together, these instructors and BeADisciple have offered over 2,000 online courses and taught close to 20,000 learners.”

In 2019, 2,423 students enrolled in 269 BeADisciple courses, said Sara Weinert, communications manager for the Institute for Discipleship. That jumped to 3,085 students enrolling in 356 courses in the COVID-19 year of 2020.

“As people have returned to in-person activities, BeADisciple’s enrollment has remained steady,” Weinert said. She expects the numbers for courses offered and student enrollment to surpass last year by the end of 2021.

“I think that people found us due to COVID,” Buffum said. “I also think there's some word of mouth to that.”

“I have always been one to read, study and learn new things,” she said. “I’m sure my interest was also stirred by being bored and shut in by the pandemic.”

Palmatier said BeADisciple transformed her “from a woman in retirement who participated in the church through Bible studies and occasional preaching, to a woman who has been charged with excitement and energy to serve.”

She has completed the requirements to be a lay servant and lay speaker and is currently taking classes to become a certified lay minister. Along with a fellow student, Palmatier is developing a retreat ministry designed to bring people together across racial, gender and other differences.

For Duerling, the training helped her adjust to the way her rural churches are used to doing things. The congregants at Spedden, Antioch and Beckwith United Methodist churches also have displayed flexibility.

The churches now have written budgets, which was new for them. But Duerling backed off when her decision to eliminate the Word Search puzzle from church bulletins raised a ruckus among members.

“I was going to just say we need to use the bulletins for other things,” she recalled. “Well, did I get an earful? I think I could leave out the sermon or anything else, but by God, that Word Search better be there.”

An app to make it convenient for small groups to be formed and maintained by people around the globe is in development at The Richard and Julia Wilke Institute for Discipleship.

The institute, best known for its popular web-based courses on Christian ministry, expects to debut the BeADisciple study app early next year, said Steve Wilke, executive director of the institute.

“This is our equivalent in 2022 of John Wesley preaching in the fields,” Wilke said. The app is based on two Wesleyan principles.

“One, the willingness to have spiritual growth outside the church building, a mechanism for that,” Wilke said. “Secondly, the great emphasis on small groups.” Wesley developed the small group concept for the early Methodist church. It’s based on the belief that relationships made through small groups draw people closer together and to God.

The app, available to anyone who has a cell phone with internet, will provide access to read and hear Scripture as well as study materials. The price to use the app is not set yet while the institute works out royalty issues and ongoing tech fees.

“It will be a highly interactive application where you're in your group of 12 to 14 people, and you'll have a leader,” Wilke said. “You'll have daily prayer and songs every day from somewhere in the world.” The first test small group is planned for March or April, with a larger second group coming next fall.

The possibilities for the app are enormous, Wilke said.

“If I went to Zimbabwe and met a few people on a mission trip for 10 days, I might later on be able to be in a daily prayer time and ongoing conversation and studying the Scriptures with the group,” he said.