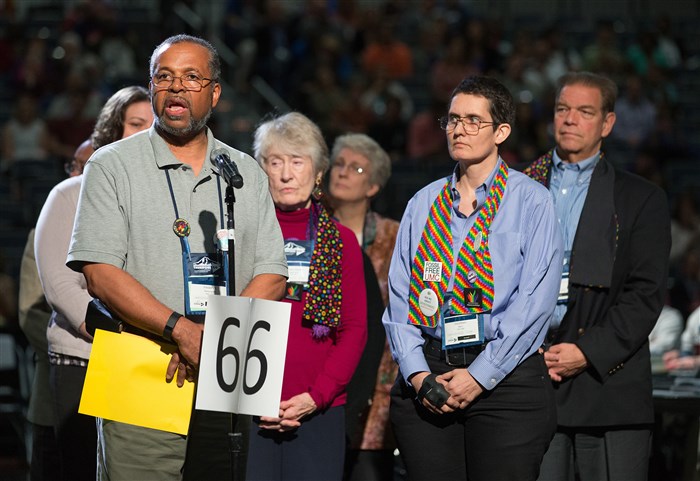 Delegate Fred Brewington (at microphone) asks the 2016 United Methodist General Conference meeting in Portland, Ore., to apologize to fellow delegate Dorothee Benz (second from right) after she was ruled out of order while trying to speak about issues of human sexuality in an earlier session.

As lay delegate Fred Brewington rose to address the United Methodist General Conference on May 14, dozens of protesters — many with rainbow duct tape over their mouths — stood outside the space reserved for delegates to symbolize the silent treatment they feel LGBTQ people get from the church.

The demonstration began when Brewington, who described himself as “an African-American man who is straight,” asked for a moment of personal privilege to speak on behalf of another delegate, Dorothee Benz.

She was ruled out of order on May 12 when she used the term LGBTQ while speaking about why she favored Rule 44. Rule 44 was not adopted. It was offered as an alternative process to Robert’s Rules of Order for dealing with particularly complicated and contentious legislation through group discernment.

Bishop Hope Morgan Ward was presiding and made the ruling. Ward said from floor that the vote was over whether to approve Rule 44, not how it might be applied. When Ward ruled Benz out of order, Benz had to sit before her allotted three minutes had expired.

Brewington, of the New York Conference, told United Methodist News Service that the problem was the manner in which the ruling took place.

“If you don’t have the ability on the floor to justify your points, there’s no use in standing up,” Brewington said after the plenary session. “More than that, it was the manner in which it (the ruling) took place. … You’re entitled to your three minutes.”

Reached May 14 after the protest, Ward said, “On Thursday, we followed the parliamentary process outlined by the chair on the commission of the general conference and the presiding officer. This led us to consider the adoption of the rule before the second step of consideration of how the rule might be used.”

She added, “Personal hurt was an unintended and regrettable consequence.”

Surrounded by delegates from the New York Conference, Brewington spoke on the plenary floor. Benz stood at his side.

“In some places,” he said, “we have referred to lesbian, gay, bisexual, transgender and queer people as ‘issues.’ They are not. They are people.”

Brewington asked Bishop Cynthia Harvey, presiding bishop for the session, for the plenary body “and you as chair” to recognize harm was done.

Harvey asked for a time of prayer. “There is a lot of hurt and there’s a lot of healing that needs to happen,” she said.

In her prayer, she asked for minds, hearts and ears to be open to all God’s children.

“We don’t have to agree, we just have to love.”

“Bishop Harvey showed an enormous amount of grace and sensitivity,” he said. “I thought that she was responsive to the request for recompense. I think there needs to be more in terms of full discussion by the entire Council of Bishops on making sure that we don’t either intentionally or unintentionally outlaw certain speech in our deliberations.”

After the morning session, Benz told United Methodist News Service a statement had been prepared for the bishops, which would have been an apology. She said that statement was rejected.

In meetings with Ward and Bishop Jane Middleton, Benz said she told them a number of times, “Please understand the choices you have here are placating the majority that is in power or offering some small solace and pastoral care to a minority that is stigmatized and excluded from the church. You cannot do both. In doing nothing, you have made your choice.

“We sent it (the statement) to Bishops Ward and Middleton at 8 p.m. last night. They indicated this morning at 8 a.m. that they brought it to the bishops and that the bishops did not agree to read it,” Benz said.

Benz wanted to have the apology read from the floor. Part of the statement said, “In our striving to avoid dissention, we have at times simply said nothing, at times actively avoided mentioning LGBTQ people. This has happened here at this General Conference. Our words welcoming all are betrayed by this kind of silence, and so we want to now affirm that we love and value LGBTQ United Methodists. This is your church; your gifts and your faithfulness help make us who we are. You are not weeds; you are wheat.”

Benz read the entire statement to her supporters who immediately took up the phrase and turned it into a cheer: “We are not weeds. We are wheat!”

Gilbert and Hodges are reporters for United Methodist News Service. Contact them at newsdesk@umcom.org or at 615-742-5470.