Ethel R. Johnson has always been a bit of a pioneer. She was the first African-American on the staff of the New York East Conference (NYEC) of the United Methodist Church and would become the first woman on the faculty of the Methodist Theological School of Ohio (MTSO).

At the 1968 Uniting Conference in Dallas, she was the only African-American woman among the conference’s 16-member delegation. So it might not be surprising that she did not support the merger that would form the United Methodist Church from the Evangelical United Brethren (EUB) and the Methodist churches. 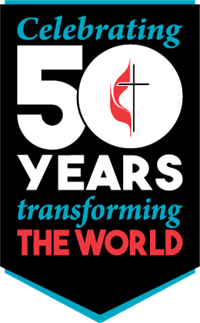 Johnson stumbled over the idea of a “united” church, questioning whether the Methodist church had made enough effort to invite the branches of Methodism that were predominantly black.

“I voted against the union. There were several of us who did,” she said in a recent interview at her home in Columbus, Ohio. “How could we call ourselves a United Methodist Church when we have completely ignored the AME, AME Zions, the CMEs and the Wesleyans and all the other branches of the Methodist church? So we are calling ourselves a United Methodist Church, but we were not united, we were just joining with the EUBs.”

Johnson had been a delegate to the 1964 General Conference in Pittsburgh when the discussion about abolishing the Central Jurisdiction came to the forefront because of the merger talks with the EUB. Protests occurred then, too, Johnson remembered, with black armbands being worn by those pushing for the demise of the racially segregated Central Jurisdiction.

“Some of us were saying we could not unite with anybody until we do away with the Central Jurisdiction,” Johnson said. “We were the only church that I know of that had constitutionally built in a segregated system.”

And while Johnson and countless others believed that the Central Jurisdiction “should never have been” and “really needed to be done away with,” concerns arose about the representation of African-Americans in the latter merger.

Included in the 1968 merger was what Johnson called “the 12-year rule,’ insuring EUB representation on all of the general church boards and agencies for that length of time.

“The thing that grieved me was that the same care was not taken . . . to say that there had to be so many blacks or African Americans on all the general boards and agencies. There was not the same care offered when the Central Jurisdiction was done away with.”

Johnson went on to say that those concerns led to the formation of Black Methodists for Church Renewal in 1967.

“BMCR had to be formed,” Johnson said. “We formed it to assure that there was representation, that the concerns of African Americans were continuously before the church.”

A year later in Dallas, Johnson joined in the silent protests, and said that she could not vote “yes” in good faith even after hearing all the rationale for the merger.

“I stood for ‘no’ right in front of Bishop Wicke’s nose,” she noted. NYE Conference Bishop Lloyd C. Wicke chaired the committee of The Methodist Church that had drawn up the merger proposal and then presided over the uniting service on April 23, 1968, with Bishop Reuben H. Mueller of the EUB church.

Johnson remembers the uniting worship itself as “really a beautiful service . . . though it didn’t have the meaning for me that it probably had for a lot of other people.”

As a lay delegate, Johnson represented New York at General Conferences from 1960 to 1972.

“After my first General Conference in 1960, I got hooked on the whole organizational structure of the church,” Johnson admitted. “I began to realize that it is so important for us to really become involved and become informed . . . we have a wonderful history and it is only as we learn about it that we can more effectively live it.”

She was first elected while serving as the associate executive secretary of the conference’s board of education. In that role, she developed Christian education programs, offered training in all of the conference’s 268 churches, and championed the importance of laity to the church. Johnson also was charged with creating Sessions Woods, a rustic camp in Bristol, Conn.

She came to the conference role in 1957 after serving as the director of Christian education at Brooklyn’s Janes UMC, a church that would become the first predominantly black congregation in the NYEC after a time of “white flight” in the 1940s. She would return to the local church at Bushwick Avenue UMC in Brooklyn after 61/2 years with the conference.

Johnson’s vision of Christian education begins with the empowerment of the laity, and the advancement of justice and social action in the church and community.

“My theme song is ‘without laity there would be no church,’ ” she said with a laugh.

When the MTSO dean called her about a position on the faculty, she told him that she wasn’t looking for a job, and “didn’t have a PhD or a plan to get one.” But she did agree to an interview. She would spend “16 wonderful years” at the Delaware, Ohio, seminary where she taught church administration and directed the field education program.

In 1975, she made her first trip to Africa to teach a course in church administration at Gbarnaga School of Theology in Liberia. She fell in love with the pastors and local church leaders she was training and would return to Africa for extended periods, teaching also in Sierra Leone, Nigeria and Zimbabwe. Her work on the continent was at times supported by the General Board of Global Ministries and the Council of Bishops. She would retire from MTSO in1985 to spend more time in Africa.

“The students I taught at Africa University were so eager and anxious to learn,” Johnson said. “They would latch on and get an idea and run with it . . . but the thing that gives me the most joy is to see people assuming responsibility for themselves and their own learning.”

Johnson laments the fractures that she sees in today’s church.

“There’s so much divisiveness to decide who is in and who is out. That’s wrong,” she said. That’s not the way that God intends us to live, that’s not the way Christ showed us when Christ was here on earth.”

Her greatest hope for the church is that more and more people will begin to feel and experience God’s love for them so strongly that “they can’t do anything else but reach out and love others.”

Even at age 93, Johnson continues to work to provide leadership in Christian education. She is an active member of Asbury North UMC in Columbus, where this summer she will co-direct a Vacation Bible School program with two 30-somethings. Johnson also serves as a co-director for the Heart of the City Freedom School, which will host some 80 elementary-aged students over the summer at Asbury and Broad Street UMC. The Freedom School is a program of the Children’s Defense Fund that focuses on literacy and civic engagement. She also chairs the spiritual life committee at the retirement community where she has lived for the last 25 years.

And about those pioneer moments in her life, Johnson had this to say:

Johnson is profiled in the Christian Educators of the 20th Century Project by Talbot School of Theology at Biola University. Read the profile here.