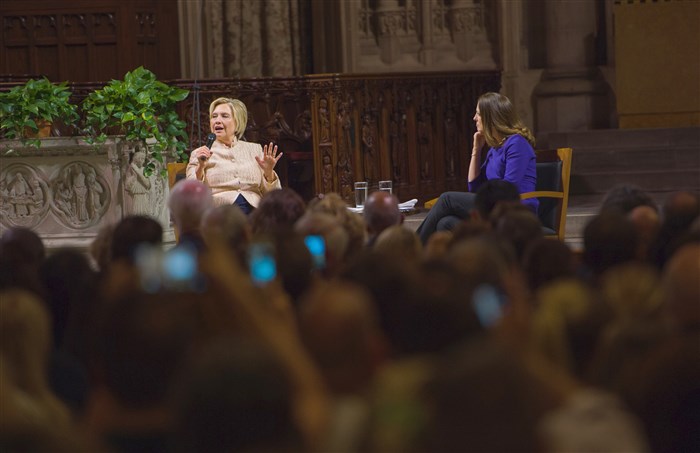 Hillary Rodham Clinton responds to a question from Rev. Ginger Gaines-Cirelli during a conversation on faith and politics at Riverside Church September 7. The event was a benefit for Camp Olmsted. Photo by Dave Cross

View the video of the event here and a photo gallery here.

That was the message that former Secretary of State Hillary Rodham Clinton shared in a conversation about her faith and politics before a group of some 1,300 people at Riverside Church in New York City.

“Enlisting is the most important part, Clinton said. “We need to start breaking down barriers. If we don’t listen to one another we’re not laying the groundwork for change.”

The September 7 event was a night to celebrate and to raise funds for the ministries of Camp Olmsted, which has been serving children in New York City neighborhoods since 1901. This summer brought some 350 kids to the camp, which is operated by the United Methodist City Society.

In his opening remarks, Bishop Thomas J. Bickerton addressed the news that Abingdon Publishing was recalling all copies of a book of daily devotionals that were sent to Clinton during the campaign. Questions had arisen about unattributed content in the book, “Strong for a Moment Like This,” whose primary author was Rev. Bill Shillady, executive director of the UM City Society.

“I’ve talked with Bill several times, and told him that there is plenty of grace for him as far as I am concerned . . . grace for his life and his ministry.

“And I hope I’m speaking on your behalf, too,” Bickerton said to those gathered. “He is a man of great faith . . . a cherished friend and trusted colleague.”

The evening was much of a “love fest” for former presidential candidate Clinton, peppered by wild applause, shouts of “We Love you, Hillary,” and picture taking. Ticket holders began lining up as early as 1 p.m. outside the church for the 7:30 p.m. event.

Bishop Bickerton introduced Rev. Ginger Gaines-Cirelli, pastor of Foundry UMC in Washington, D.C., who served as interviewer for the conversation with Clinton after Shillady bowed out. The Clinton family attended Foundry while living in the capital. Bickerton joked with Gaines-Cirelli, “If you’d like to be seen in New York more, I can do something about that.”

“No thank you,” she responded, with a smile.

In introducing Clinton, the bishop spoke of how she had inspired so many by the way she has integrated her faith into her life and social policy.

“Sister Hillary, we love you,” Bickerton said to loud cheers.

Clinton, who is a lifelong United Methodist, talked freely about the difficult days immediately following the November 8th election.

“I was devastated . . . I never thought I would lose,” she said. “It threw me back . . . I had to rely on my own internal resources.” She recalled having to get up the next day and deliver a concession speech without any hint of bitterness or anger.

Clinton said that she relied on several tools to get her through the early days of the grieving process.

“Number one was prayer,” she said. She said she was also lifted by those who sent her prayers, time she spent with her grandchildren and friends, long walks, yoga, and “a fair share of chardonnay.” She also read some of the writings of Henri Nouwen, the Dalai Lama, and Bishop Desmond Tutu.

“We all know what deep discouragement looks like,” she said, noting that she decided to write a book to figure out what had happened and then explain it.” Her book, “What Happened” is due out next week.

Writing the book was a difficult, yet cathartic, process; one that gave her the courage to get up and keep going. She said she was most worried that the young women who had championed her cause would give up because of her loss to Donald Trump.

“This is a time when we are called to find our own truth and act on it,” Clinton said in urging the gathering to educate themselves and organize to work against the “persistent effort to disenfranchise millions of people.”

She noted that during the campaign some people said she didn’t display enough anger.

“But anger is a not a strategy for good leadership,” she said. “I look for ways to find common ground, if not a higher ground.”

When she tried to speak more about love as a community concept during the campaign, some questioned what she was doing.

“There is a large group of people with the strong opinion that if you are a Christian . . . you can only have one set of political beliefs and if you deviate from those beliefs, you somehow aren’t really a Christian,” she said. “I reject that completely.”

Clinton encouraged participation in faith-based movements like the “Sacred Resistance” project at Foundry UMC that presents the congregation with a weekly list of causes and actions in which to enlist. She noted that resistance grounded in the church can provide a sustained response. “It allows one to rest as others step up . . . as it says in Galatians, ‘do not grow weary in doing good.’ ”

While not naming President Trump, she lamented the decision to end the Deferred Action for Childhood Arrivals (DACA) program.

But it is her faith that allows Clinton to be hopeful and optimistic about the future of the country.

“That great arc of justice that we have tried so hard to follow – with our faults and our setbacks – keeps moving toward a better life, a better time, a better place, on this earth as well as after,” she said. “We have faith to guide us in the right direction.

“We can’t let politics dehumanize anyone, or it dehumanizes us all,” Clinton said.

And how should Christians speak up or speak out?

“Speak out with compassion – good humor if you can,” she said. “Do it with a song in our hearts. We can’t be turned into a mirror image of those peddling hate and bigotry.”

Two of the young clergywomen who supported the candidate with prayer and devotions in the “#wepraywithher” project were heartened by what Clinton had to say.

Rev. Shannon Sullivan of the Baltimore-Washington Conference was particularly moved by how Clinton’s faith helped her deal with the process of grieving after the election.

“She was so open about that, and so optimistic about continuing to do God’s work,” said Sullivan who has been dealing with her own grief because of a miscarriage shortly after the election.

Rev. Lauren Godwin came from West Virginia with her father to hear more about Clinton’s journey after the loss.

“She’s such a strong role model as a person of faith . . . as a woman of faith,” Godwin said. “I’m going to go back home and challenge people to share their own faith stories.”

Part of the evening included awards to an individual and church for their support of Camp Olmsted and work on behalf of children. Metropolitan District Superintendent Denise Smartt Sears was honored for her advocacy for children and work on educating youth about the gifts of diversity. St. John’s UMC of Elmont, which is led by Rev. Patrick Perrin, was recognized for its children’s outreach, including Vacation Bible School and an after-school program. The church partners with the City Society and the Five Points Mission in these programs.

Bickerton also announced the establishment of the Hillary Rodham Clinton “Make Our Kids Strong” Scholarship for Olmsted campers. Some 60 percent of the children receive financial assistance to attend the camp. It was reported that $80,000 had already been raised for the fund. The City Society expected to raise more than $50,000 at the Riverside event for the camp.

Ticketholders were to have received a free copy of the book of devotions at the gathering, but instead were offered a refund for a portion of the price, if they so chose. Abingdon Publishing pulled their sponsorship of the event after announcing the book recall.

Shillady has said that he deeply regrets the situation, and has apologized to those whose work was not credited, to Secretary Clinton, Abingdon Press and all the writers who helped publish the book. The book contained 365 of the 635 daily devotions that were emailed to Clinton. They were first written by Shillady, and then a team of other clergy persons, including Methodists, Baptists and Presbyterians, were brought into the project.

More information about the UM City Society can be found on their web site.