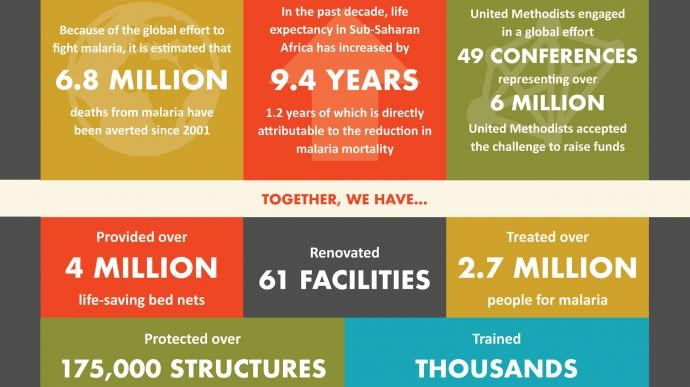 By Crystal Caviness and Ashley Gish

Since 2010, the people of The United Methodist Church through its Imagine No Malaria initiative have focused on reducing malaria deaths in Sub-Saharan Africa. In the process, the denomination has learned that “our God is able, more than able to do more than we can ask or imagine.”

Watch the video above that features an original song commissioned by United Methodist Communications for its Imagine No Malaria celebration held at General Conference 2016 in Portland, Oregon. The song, “Our God is Able,” was written by James Tealy and James Elliott and recorded by Jeremy Rosado, a finalist on Season 11 of “American Idol.”

And download this infographic to post in your church and share. It beautifully shows the effects of the ministries of The United Methodist Church to reduce malaria deaths in Sub-Saharan Africa.