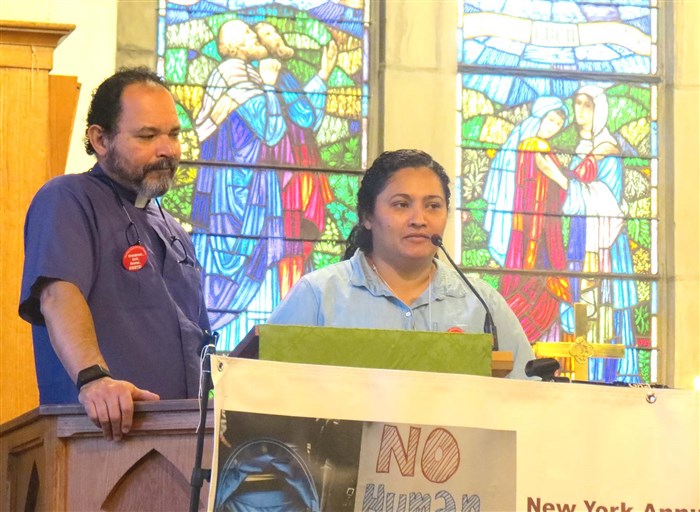 Maria Larios, who works with the Hispanic ministries at the Hicksville UMC, shares the story of her immigration journey from her native Honduras. Rev. Enrique Lebron, left, offered translation.

A photo gallery of the event can be viewed here.
Two short video clips of Bishop Bickerton's remarks can be found on the NYAC Facebook page.

BY JOANNE S. UTLEY | Editor, The Vision
In an effort to reframe Inauguration Day, New York Conference clergy and lay persons joined Bishop Thomas J. Bickerton on January 20 to work, learn and pray with members of the immigrant community on Long Island. The daylong Immigration Vigil and Forum, sponsored by the conference’s Task Force on Immigration and Board of Church & Society, was hosted by the Hicksville United Methodist Church, which serves a growing immigrant population.

In his opening remarks, Bickerton confirmed that the day had been planned as a “conscientious objection” to what was going on in Washington, D.C. He suggested to the event planners that any prayers offered today “not just be in a sacred place, but in the community.

“We need to be grace for those who are skeptical and afraid . . . a safe place for the loners, losers and lost ones. This is not a smooth transition today. Many are so fearful,” he said, before offering a word of prayer.

Much of the day was set aside for learning about the rights of immigrants and the specific issues that they may face. First up was a tour of the food pantry in the Hicksville church that sees about 40 families a week and served 1,060 separate households in 2016. The numbers rise during the winter months when seasonal workers have fewer or no jobs.

Rev. Dr. Marjorie Nunes, pastor at Hicksville, said that offering food staples to those in need has been a coordinated effort with other churches in the community. The pantry has been operating for 10 years and had to overcome some initial opposition before it could open.

“I feel very blessed to be able to do this,” said Fern Funk, chairperson of the pantry. She noted that connections are made and relationships develop as the clients share stories about their lives and families with the pantry workers.

“Sometimes we see people leave us, but that’s a good thing,” she said.

A “Know your Rights” seminar followed and was led in English and Spanish by TJ Mills, managing attorney for the NYAC’s Justice For Our Neighbors (JFON). JFON currently offers free legal clinics in four places, three of which are UM churches, including the Hicksville church.

Mills explained that the nationwide assistance program first began in churches because immigrants considered them safe places. The JFON work tends to focus on family petitions for reunification, citizenship for permanent residents, and visas in humanitarian, asylum or domestic violence cases. They also educate immigrants about their rights and how to prepare for encounters with the police or Immigration and Customs Enforcement officials.

Mills expressed concern over campaign promises made by President Donald Trump to build a wall between Mexico and the United States, to deport millions of immigrants, and to penalize sanctuary cities by withholding federal funds.

“We do have one thing in our favor,” Mills said. “Gov. [Andrew] Cuomo . . . doesn’t like bullies, and he’ll go face-to-face with Trump to preserve our sanctuary cities.”

Some of the most compelling moments of the day came as two immigrants shared their stories during the prayer service.

Maria Larios left her native Honduras to join her father in the United States when she was just 17 years old, she told the gathering through translator, Rev. Enrique Lebron. But because she was undocumented she made the treacherous journey through Mexico and across the border in the hands of a human smuggler or “coyote.”

At many times in the month-long journey, she thought she would die, but “God knew the desert, God brought me through.”
Larios, 42, has since became an American citizen and serves the Hispanic community through the Hicksville UMC.

“This is where I belong,” she said. “God has a purpose for me here.”

Zamzam Quraishy is also in ministry at the Hicksville UMC, serving as an evangelist and lay servant. She converted to Christianity in her native India and worked with the Billy Graham ministries there. After her sons began to be harassed and threatened because of her faith, Quraishy made the decision to come to the United States.

She came into the country legally and believed that “her status was okay” until an early morning raid on her home. The advice she’d been receiving all along about her immigration status was wrong and she found herself in a New Jersey jail. She reached out to then Hicksville pastor, Rev. Tim Riss, who connected her to TJ Mills and JFON.

“If the church had not intervened, I don’t know where I would be,” she said. “I came here because I wanted to save my children’s lives . . . I hope they will be able to come here one day.”

In his remarks during the midday service, Bishop Bickerton told a story about a man who often came to a church that he was serving to ask for assistance. One day the bishop asked the man why he came to his church and the man walked the bishop down the block to look at a telephone pole. Carved on the pole was a marker directing others to the church as a safe and caring place.

“May the people that see that symbol,” the bishop said, pointing to a cross and flame, “know that we are a safe place. May we carve God’s name on our hearts.”

Bickerton shared that one of the things that breaks his heart and drives his ministry is the “disconnect between those that are privileged to receive the life that God intended for them to live and the life that people live because they’re victimized by the world.

“The only document that I’m concerned about is the document written on your heart, he continued. “You – in this room – are a child of God . . . you are claimed by God . . . loved by God.”

He continued by saying, “If we only expect those who are disenfranchised and left out to carry the banner we will only continue to feed the rhetoric of anger that exists in our culture.

“It’s the unexpected voices that need to pick up the banner, the ones who’ve been blessed with privilege in their life who need to carry that banner at the forefront and say there is something more and we cannot tolerate the separation between the haves and the have nots,” he continued.

“It’s up to us as people of the church to pick up the banner no matter who we are or where we are . . . this can be and should be the church’s greatest hour.”

The event wrapped up with a discussion about resources to educate churches on how to best serve and protect the immigrants in their communities.

For more information, go to the web sites for the Task Force on Immigration, Justice For Our Neighbors, or the Board of Church & Society.