GC2016: Where is the zeal for agency reform?

GC2016: Where is the zeal for agency reform?

An effort to reform United Methodist agencies in 2012 had the endorsement of bishops, the advocacy of church leaders and the vote of General Conference.

The only snag came on the last day of General Conference — when the Judicial Council, denomination’s top court, ruled the plan unconstitutional and void.

Now, a determined group of United Methodists is bringing back a slightly revised version of the plan to the 2016 General Conference when the denomination’s top lawmaking body meets May 10-20 in Portland, Oregon.

They believe “Plan UMC Revised” is now constitutional and still can win the majority of votes. What the new plan lacks, proponents acknowledge, is the denomination-wide fanfare that agency restructuring proposals received just four years ago.

“I thinks it’s fair to say that a lot of people who worked on this, starting with the bishops, really were demoralized by the Judicial Council decision,” the Rev. Don Underwood said. “So much work went into that, and it was stopped dead in its tracks.”

Underwood is the senior pastor of Christ United Methodist Church in Plano, Texas, a General Conference delegate and one of the six drafters of the restructuring plan.

The pastor noted that he too was initially reluctant to revisit the legislation. Ultimately, he concluded, agency reform is “important for Methodism.”

The thrust of that reform is reducing the number of agencies and increasing their oversight with a strong executive.

“It’s not just downsizing the agencies, and it’s not just about saving money,” Underwood said. “What’s really important about Plan UMC … is the creation of an executive, who will keep our agencies out of the silos, increase collaboration and keep our agency leaders focused on the mission statement.”

The plan has its critics — among agency leaders and others. Fred Brewington, a General Conference delegate from New York, criticized Plan UMC Revised as too similar to a corporate model.

“We’re talking about making disciples of Jesus Christ for the transformation of the world,” he said. “Sometimes the strictness of a corporate structure is not the answer.”

Nonetheless, Underwood and other proponents are hoping to reinvigorate the passion for agency reform, even as a Judicial Council review of the legislation is still pending.

They are doing so without the advocacy of some major players in denominational leadership. That raises the question: What has changed?

The Council of Bishops — in referring the revised plan for Judicial Council review — made clear the action was “in no way intended as support or opposition” to the proposal.

The plan also is getting some pushback from the Connectional Table, a denominational leadership body that in 2012 was one of the biggest champions for agency restructuring.

The body has not endorsed any restructuring plan. Instead, it recommended principles for examining restructuring plans, which among other things, specifically urges that General Conference delegates “not act in haste and allow God to order our steps.”

The 59-member Connectional Table acts as sort of a church council for the denomination, coordinating general church ministry and resources, including the work of the agencies.

But this is not the same Connectional Table as four years ago. More than half of the Connectional Table’s membership has changed, in part because some of the most ardent reformers had completed their eight-year terms. Among the new members are a number of lay people and clergy who were critics of the body’s 2012 restructuring proposals.

Brewington is one of those critics, and he urges holding off on agency restructuring. He noted that there are two ongoing endeavors, started at the 2012 General Conference’s behest, that when completed would have far-reaching effects on the work of the agencies. Those initiatives have commanded many church leaders’ attention these past four years.

The United Methodist Board of Church and Society has the task of revising thedenomination’s Social Principles to be more globally relevant. The General Conference’s Standing Committee on Central Conference Matters has a separate mandate to make the Book of Discipline’s largest section — Part VI, Organization and Administration — truly global. That section includes agency functions and administration.

Neither Church and Society nor the standing committee expect to complete its proposals until the 2020 General Conference.

“I think what we’re really looking at is something that is going to be more holistic for the denomination in the long run (than agency reform),” said Brewington, who is also a standing committee member.

“I think that’s where the Connectional Table and Council of Bishops are giving some forethought so we’re not doing something in a rushed way.”

However, Lonnie Brooks, one of the drafters of Plan UMC Revised and a General Conference delegate from Alaska, said he and other plan proponents believe the denomination has waited long enough to see significant changes in the agency operations.

“How can taking action in 2016 be seen as rushing?” he asked. To him and others, change already has been eight years in coming. 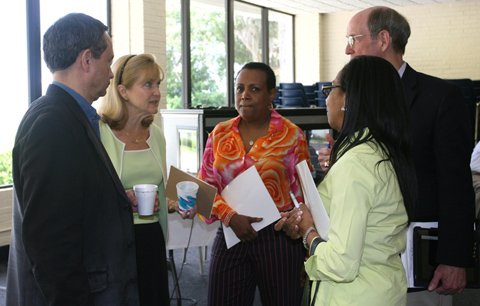 How the church got here

Brooks and other restructuring proponents point out in a statement that the impulse to reduce the number of agencies and strengthen their oversight came out of the Call to Action, an initiative that examined both congregational vitality and general church operations.

The Council of Bishops and Connectional Table officially launched the initiative in the wake of the 2008 economic crisis and the decades-long decline of U.S. membership. As part of the endeavor, church leaders commissioned an operational assessment by the outside consultant, Apex. The Apex study found that agencies often failed to collaborate with each other and their boards were too large and met too infrequently to provide effective supervision.

Ultimately, three comprehensive agency restructuring plans aimed at addressing these issues ended up going before the 2012 General Conference. It wasn’t smooth sailing for any of the plans at the lawmaking assembly. The original Plan UMC and its revised version are the result of a compromise between two of the restructuring plans. Plan UMC passed by nearly 60 percent of the vote.

After the Judicial Council struck down the original Plan UMC, the 2012 General Conference spent its last night trying to salvage some of the reforming impulse by approving legislation submitted by agencies to shrink their boards.

However, Jones said an improving U.S. economy has sapped the sense of urgency, and as he sees it, the Council of Bishops has given insufficient attention to the Call to Action over the past four years.

He commended the Plan UMC Revised proponents for working on reform.

“Our current system of funding and administering general church ministry is unsustainable, and yet there is insufficient attention being given to fostering a new way of living and serving as a global church,” he said.

Work still to do

Many United Methodist leaders would agree that structural reform is needed denomination-wide, but they disagree on what that change should look like or the timeline for carrying it out.

The Rev. Amy Valdez Barker served on the initial Call to Action Steering Team and is now the top executive of the Connectional Table.

“The Call to Action was really about looking at the church as a whole and beginning to focus our attention, energy and resources toward increasing vital congregations across the connection,” she said.

The Connectional Table, she said, has worked the past four years to help agencies collaborate to bolster church vitality.

“The larger vision, the thing we are really working with zeal toward is: What does it mean to serve a worldwide church?”