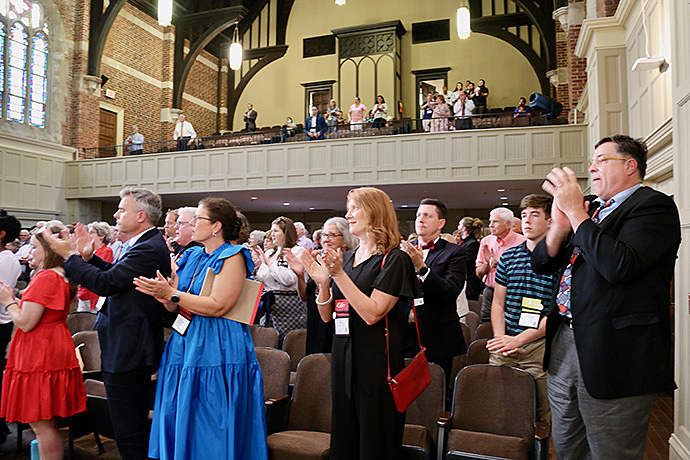 A large crowd at a June 13 Celebrate UMC-sponsored event at Huntingdon College in Montgomery, Alabama, rises in applause. Celebrate UMC, which formed in the Alabama-West Florida Conference, is one of a handful of grassroots groups that are making an affirmative case for The United Methodist Church as some congregations decide whether to leave the denomination. Photo courtesy of Celebrate UMC.

The Rev. Cory Smith is a pastor in the Alabama-West Florida Conference, where more than a few traditionalist churches are poised to disaffiliate from The United Methodist Church and others are weighing their options.

The Rev. Cory Smith is a pastor in the Alabama-West Florida Conference, where more than a few traditionalist churches are poised to disaffiliate from The United Methodist Church and others are weighing their options.

But Smith is a determined leader of Celebrate UMC, a group of Alabama-West Florida clergy and laity who are waving the United Methodist flag.

“The purpose of Celebrate UMC is to support, encourage and resource those who wish to stay in the UMC,” said Smith, pastor of Auburn United Methodist Church, in Auburn, Alabama.

Celebrate UMC sponsored a June 13 event at United Methodist-affiliated Huntingdon College, in Montgomery, Alabama. Some 400 people nearly filled the chapel to hear the Rev. Tom Berlin, a veteran General Conference delegate and endorsed candidate for bishop from the Virginia Conference — and a strong advocate for The United Methodist Church.

Smith considers that night a turning point for himself and like-minded members of Alabama-West Florida.

“There was great energy in the room because an event focused around staying UMC had not ever been hosted in our conference,” he said. “It was the launch point for a new narrative in our conference. Since then, clergy who wish to stay UMC have felt more connected and empowered.”

Alabama-West Florida is one of a handful of U.S. conferences seeing considerable 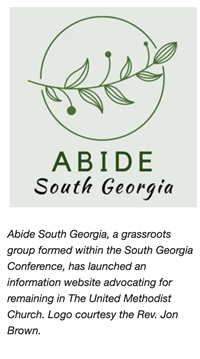 discussion and action around disaffiliation but also the emergence of grassroots coalitions advocating for remaining in The United Methodist Church.

They have, in effect, stepped up to counter the messaging of traditionalist, pro-disaffiliation groups such as Good News and the Wesleyan Covenant Association.

In the North Alabama Conference, there’s Stay UMC, which has been going since 2020 and has a robust internet presence.

“Our entire website is intended to persuade people to consider remaining in the denomination,” said the Rev. Steve West, a leader of Stay UMC and pastor of First United Methodist Church in Jacksonville, Alabama.

In the South Georgia Conference, there’s a recently formed group called Abide South Georgia, which has launched its own information website.

The South Georgians were inspired by Stay UMC.

“They really were the impetus,” said the Rev. Jon Brown, one of the Abide South Georgia organizers and associate pastor of Vineville United Methodist Church in Macon, Georgia. “We really liked what they did, but it seemed focused on their own conference. We said, ‘Well, what if we did our own?’”

The Arkansas Conference has Arkansans Staying United, which has a Facebook page with more than three thousand followers, and the Texas Conference is home to That We May Be One.

The latter group started in 2016 with the goal of promoting unity and understanding among conference members with different theological perspectives.

But these days, That We May Be One is trying to make sure accurate information and a pro-United Methodist perspective reach the meetings where hard decisions are being considered.

“What we’re mostly working on is trying to help churches who are in the discernment process,” said the Rev. Lindsay Kirkpatrick, pastor of Asbury (United Methodist) Church in Pasadena, Texas.

Kirkpatrick believes #BeUMC and other broad-based efforts to make a case for the denomination are vital but can’t substitute for local groups.

“What we have that they don’t is relationships,” she said.

No one disputes that The United Methodist Church is in a fraught season.

Decades of internal conflict, especially over how accepting to be of homosexuality, led a diverse group of church leaders to propose a formal denominational split in January 2020. The Protocol of Reconciliation and Grace Through Separation would allow traditionalist churches to depart with their properties and form a new denomination, getting $25 million to start.

But the pandemic has postponed until 2024 the General Conference at which any separation proposal could be approved. Meanwhile, a traditionalist breakaway denomination, the Global Methodist Church, began operating earlier this year.

Churches wanting to disaffiliate can take advantage of Book of Discipline Paragraph 2553, which allows them to be released from the denomination’s trust clause and depart with their properties — if they meet certain procedural and financial obligations. That opportunity expires at the end of 2023.

Still, the conferences where the grassroots, pro-United Methodist groups are active tend to be seeing significant disaffiliation action.

There are about a dozen more annual special sessions scheduled this year for consideration of disaffiliation resolutions.

As many local churches continue to weigh their future, the grassroots groups seek to assure traditionalist churches that The United Methodist Church will continue to welcome and value them.

The groups also have been scrambling to share facts about the disaffiliation process and counter what they see as distorted representations of The United Methodist Church.

“We were aware that some churches were in the discernment process and were getting biased or incomplete information from either the pastor or lay leadership,” said West of Stay UMC. “We’ve taken it upon ourselves to offer some balance.”

The Stay UMC website offers original material, such as an FAQ, as well as links to other sources, including from the North Alabama Conference. The group also has dispatched speakers when churches in discernment have requested a pro-United Methodist representative.

The website for That We May Be One provides a wide range of resources, including a lengthy “UMC Mythbusting” document. The first section refutes the claim, made by some disaffiliation advocates, that The United Methodist Church is straying from core Christian beliefs.

Another section pushes back against the idea that churches considering disaffiliation need to act right away. That We May Be One stresses that 2553 is still operative for another 15 months, and the group says it’s exploring whether the Texas Conference could approve a resolution extending a financially gentle exit path beyond that date, to give churches all the time they need to make an important decision.

“In our opinion, there’s a huge sense of false urgency,” Kirkpatrick said.

Along with written information, That We May Be One’s site has video clips featuring pastors from the conference, but also the Rev. Adam Hamilton, pastor of the 15,000-member United Methodist Church of the Resurrection in Leawood, Kansas.

After the Houston event, Hamilton posted this on Facebook: “Much larger crowd than we expected and a lot of enthusiasm for Christ and for the UMC.”

Have the grassroots groups’ work resulted in any churches steering away from disaffiliation?

The groups aren’t claiming that but believe they’re having an effect.

“There have definitely been some churches that have slowed their process,” West said.

Cory Smith and others in Celebrate UMC certainly feel they have helped shift the conversation in the Alabama-West Florida Conference. The group recently published an open letter that’s collecting endorsement signatures from clergy and laity and getting circulated on social media.

“We believe that no institution or denomination is perfect, including The United Methodist Church,” the letter reads, “but this Church has called us, nurtured us and brought us into connection with God’s children of our conference and we will work to make it better each day.”