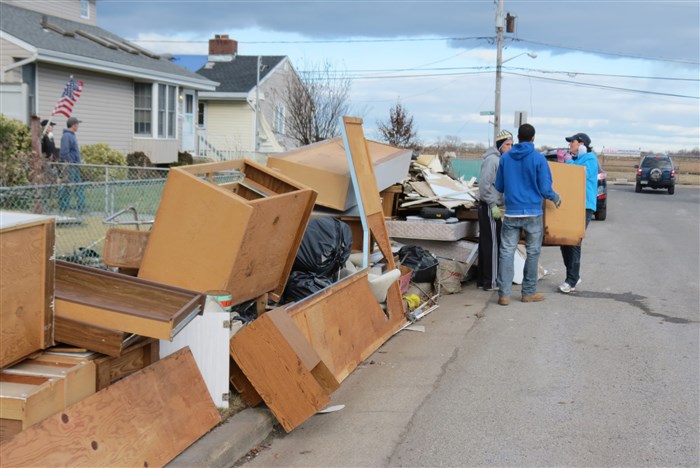 A crew from the Centerport UMC clears out a home in Freeport damaged by Superstorm Sandy.

Friends, even as many of us are caught up in the response efforts going on in Texas, Florida, Puerto Rico, and other areas of the Caribbean, we pause to remember the events of 5 years ago this weekend when Superstorm Sandy came ashore in the northeast. It was recognized as the deadliest and most destructive hurricane of the 2012 Atlantic hurricane season, and the second costliest hurricane in United States history. At least 233 people, in eight countries, were killed along the path of the storm.

For many the storm was more than statistics – it was personal. For many, watching recent images on television were all too real, all too familiar. Lives, families, communities were greatly impacted and in many cases forever changed. Five years later there are still thousands who are in temporary housing awaiting assistance or still struggling toward recovery, a “new normal” as it is often called.

Friends, on this anniversary I would ask that we all spend a moment in prayer for the survivors, for those who were lost, for those still recovering from Sandy and from recent storms and other disaster events. I would ask that we offer thanks to the many first responders and volunteers who were a part of that response and recovery effort and who continue to be a part of on-going response efforts. I thank our primary partners, UMCOR, and the American Red Cross, and of course, our many churches, who provided resources for our work.

Personally, I would like to thank the many of you who responded to that storm, prior storms, and who continue to be part of the immediate and long-term disaster recovery ministries of our Annual Conference throughout our country and world. Lives continue to be changed because of you.

On this anniversary I would encourage you to visit our web site, type “Hurricane Sandy” in the search box, and take some time to look at the photos, watch the videos, see the images, hear the voices – not of destruction, but of hope and healing.

I am proud to be part of a Church which sees this type of work as a ministry, as part of its overall mission and reason for being; and again I thank you for your dedication to serving God’s people here and everywhere. Wherever there is need.