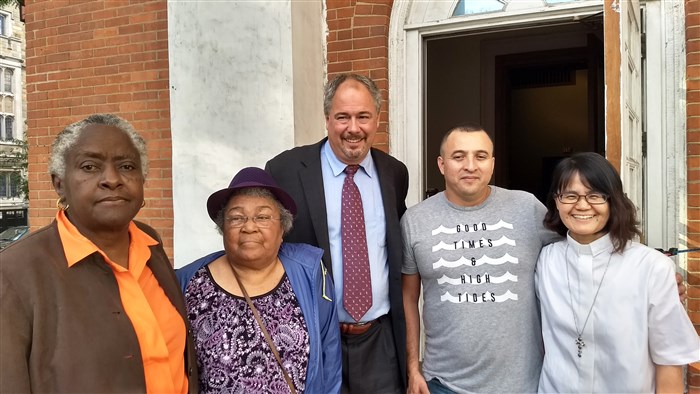 Ecuadorean immigrant Marco Reyes Alverez, second from right, on the steps of First and Summerfield United Methodist Church in New Haven, Conn., with (from left) Wanda Harris, Adeline Tucker, Rev. Paul Fleck of Hamden Plains UMC, and Rev. Juhye Hahn. Reyes sought sanctuary at the church where Harris and Tucker are on the Social Concerns Committee and Hahn is the pastor.

In April, the people of First and Summerfield United Methodist Church in New Haven, Conn., voted to become a sanctuary church offering refuge to immigrants facing certain deportation. Early on August 8, their faith was put into action as the church took in Marco Reyes Alverez, just hours before he was scheduled to be deported to Ecuador.

Reyes, who is married and has three children, came to the United States in 1997. The Meriden resident is a construction worker and the sole provider for his family. In 2009, Reyes was issued an order of deportment, but had been allowed to remain in the country with his family through a series of stays of that order. But in July, Reyes was informed that Immigration and Customs Enforcement (ICE) officials would remove him on August 8.

At a 5 p.m. press conference called to declare that Reyes had sought sanctuary at the church, he spoke about his decision with the help of a translator.

“Just the thought of being separated from my loved ones, and . . . the chance that I would never see them again, was a very heavy burden for them, and, of course, for me,” Reyes said.

Rev. Paul Fleck, pastor of the Hamden Plains UMC who has been working with an interfaith group to organize sanctuary churches in Connecticut, addressed the more than 100 people who gathered in a show of support on the steps of the New Haven church.

“Today, because of a system that threatened to tear Marco Reyes, a child of God, away from his family, First and Summerfield United Methodist Church, a church known as ‘the conscience on the Green,’ has welcomed Marco to live in their house of worship.”

“Our faiths tell us to love neighbor . . . I know Marco Reyes to be a good man. He is a good worker, a good husband, a good father, a man of faith. He is my neighbor,” Fleck said.

While there is no law against it, U.S. Immigration and Customs Enforcement (ICE) has an unofficial practice of not going into sensitive locations – like churches, hospitals or schools – to take immigrants into custody.

Rev. Juhye Hahn, who became the pastor at First & Summerfield on July 1, spoke to those that might challenge the church’s actions.

“When Jesus fed the hungry in the wilderness, he didn’t ask for photo I.D.  He didn’t ask for legal documents. He didn’t ask whether they had Galilean citizenship.  The only thing he saw was the need of the people, who are hungry.  So, he simply fed them with great compassion,” Hahn said.

Hahn related that at 2:30 in the morning she had gotten a text from Fleck that said, “Someone needs sanctuary at 6 a.m. today.”

“We didn’t ask for his legal situation. We didn’t ask where he originally came from. We just saw the person’s great need for sanctuary.  So, we simply responded, “We will be there at 6!”  She continued, “We do so as an open act in conformity with our faith commitment to welcome the stranger and provide hospitality to all who are in need.”

Statement from Bishop Thomas J. Bickerton
I am grateful for the leadership of First and Summerfield United Methodist Church for their courageous and visionary stance to become the first sanctuary church within the bounds of the New York Conference. By doing so, they have carried forward the longstanding tradition of the church being a place of refuge and safety for those who suffer the brunt of the storms of life. Those storms are growing in intensity that, as a result, will cause more victims to seek places of safety, hospitality and grace.

There is something fundamentally wrong with a system that singles out a small number of people in order to instill fear among many. That system is tearing apart families, eliminating civil discourse, giving license for behaviors that alienate people, and widening the already large gap between persons who share differing opinions.

In the midst of this uncertainty and chaos, it is time for the church to embody our beliefs and demonstrate to the world a standard of peace, civility, grace and love. It is also time for us as United Methodists to live out our Wesleyan heritage by striving for personal and social holiness in the manner in which we engage with the people in our communities.

I urge more of our United Methodist congregations to take the bold step to become places of sanctuary, to offer open hearts and open hands to the immigrants and others who desperately need clear and tangible evidence that they are loved and worthy in eyes of God.

These are uncertain and frightening days. In the midst of the storm, may we be the calming presence that clearly demonstrates that we not only believe in the Great Commandment to love God and neighbor, we aim to live it as well.


According to Reyes’ attorney, Erin O’Neil Baker, ICE officials apprehended him in 2007 when a car in which he and his family were passengers accidentally crossed the border into Canada. Although he fought to stay in this country, a deportation order was issued in 2009.

U.S. Sen. Richard Blumenthal, who has advocated for other immigrants, took part in the rally and suggested that Reyes has a valid claim for asylum in the United States.

“Reyes has sought refuge from violence and persecution in Ecuador,” Blumenthal said, noting that Reyes brother-in-law was recently killed in Ecuador and his family there has been threatened. “He faces danger and death” if he returns, the Connecticut senator added.

Blumenthal called Reyes “a hardworking father and husband who has called Connecticut home for two decades without any criminal wrongdoing.” He lamented that under the administration of President Donald Trump, ICE has shifted its focus from deporting people with criminal records to removing “literally anyone.”

“It's a policy of rounding up everyone who’s undocumented, rather than targeting people who are dangerous or have criminal records and pose a threat to our national security,” Blumenthal said.

New Haven Mayor Toni Harp also voiced support for Reyes, telling those gathered, “Just to be clear, New Haven will remain a sanctuary city.” Trump has threatened to withhold federal funding from cities across the country that offer sanctuary for undocumented immigrants.

Reyes was the second immigrant to seek sanctuary in a New Haven church in recent weeks. In July, Nury Chavarria of Norwalk was facing imminent deportation and sought sanctuary at the Iglesia de Dios Pentecostal, a part of the Connecticut interfaith group working in the sanctuary movement. After a week’s stay at the church, a federal judge in immigration court in Hartford granted Chavarria’s motion for an emergency stay.

In an email, New York Conference Bishop Thomas J. Bickerton praised the leadership of First and Summerfield for “their courageous and visionary stance to become the first sanctuary church within the bounds of the New York Conference.

“By doing so, they have carried forward the longstanding tradition of the church being a place of refuge and safety for those who suffer the brunt of the storms of life.  Those storms are growing in intensity that, as a result, will cause more victims to seek places of safety, hospitality and grace.”

Bickerton went on the challenge “a system that singles out a small number of people in order to instill fear among many” and urged more UMC congregations to boldly become places of sanctuary for their immigrant populations.

The congregation of First and Summerfield UMC made the decision to become a sanctuary church shortly after several of its members attended a March information session sponsored by the New York Conference Task Force on Immigration.

At the time, the pastor, Rev. Dr. Thomas Gye Ho Kim, said he had challenged the church to become “salt and light” for the world. He described the small congregation that hosts about 40 people in worship each week as a very progressive one, noting that they had become a reconciling church in the 1990s.

When the possibility came before the church council, the vote was unanimous.

“I’ve never seen such a positive response in 22 years of ministry,” Kim said in an April 2017 interview. “We have every reason to be proud – even though we’re a small congregation . . . it makes me proud to be a United Methodist pastor.”