Recognizing the seriousness of food shortages in the local community since the COVID-19 pandemic began, many ethnic minority churches have initiated food ministries that are still going strong.

When cases in New York skyrocketed and businesses were forced to close in the earliest days of the coronavirus pandemic, members of First United Methodist Church in Flushing saw many of their neighbors struggling. That’s when the Food Sharing Ministry was born.

“We have continued to preach about loving our neighbors and bringing the spirit of Jesus to the world, but we have not been able to put this into practice,” said Yonghwa Ha, mission committee chairperson.

Though the church had been located there for nearly 50 years, Ha said they didn't know much about their neighbors, “nor did we even try to get to know them.

“We thought that if we worked together, we could put into practice what we have been preaching about loving our neighbors,” Ha said.

The Rev. Chan-young Choi, who is in charge of church missions, said many of their neighbors were in “blind spots” and not getting help from the government — in particular, undocumented immigrants isolated by the pandemic and lacking basic necessities.

“When we had a church council meeting, there were voices against this ministry for safety concerns, but eventually, we reached the consensus to begin the ministry while also obeying the guidelines for sanitation,” Choi said. 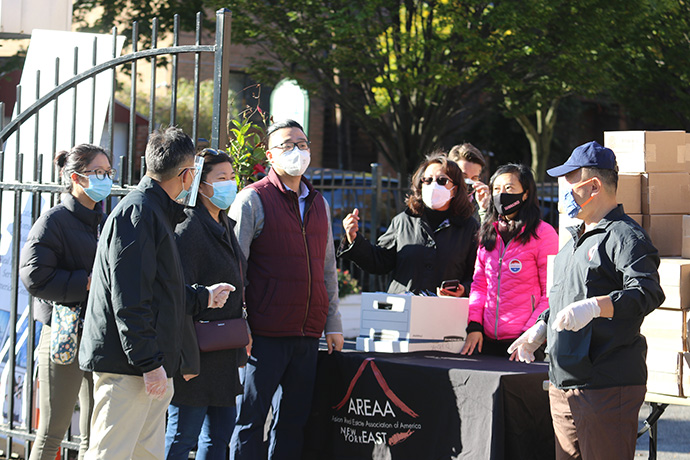 Before Thanksgiving 2020, U.S. media reported on a growing national hunger crisis, noting that COVID-19 is disproportionately affecting the poorest Americans, with one of the biggest problems being food shortages.

The church purchased vegetables and fruit, canned food and ramen directly from nearby markets and distributed them to about 100 families every Saturday. The initial plan was to distribute food for three months, from May to July. However, the financial burden quickly increased and the church had to consider whether to discontinue the ministry.

“The church was unable to ignore the needs of the local community when we witnessed the community lining up starting at dawn even though the ministry starts at 9 a.m. on Saturdays,” Choi said. “Also, we realized that it would be a channel for the mission of our community, so we decided to continue.”

After he heard about the church’s struggles, the Rev. Tom Vencuss, director of missions and disaster response for the New York Conference, organized a Zoom meeting with First Church and other ethnic minority churches in the conference that were actively involved in food-sharing ministries.

That meeting helped First Church expand and broaden their understanding of the ministry, with other churches sharing information from their own experiences.

The Rev. Dorlimar Lebrón Malavé, pastor of First Spanish United Methodist Church, was on the call and offered advice for First Church.

“They shared that they had been purchasing food on a weekly basis but knew that it would not be financially sustainable long-term,” she said. “I had a meeting with their leadership and connected them to my contacts and resources, and shared my knowledge on the data collection for their clients.”

Malavé stressed that collaborating in ministry is particularly important during times like this.

“In times of crisis, the way we make it through is by coming together. The Methodist connection has served as our biggest asset during this pandemic,” she said. 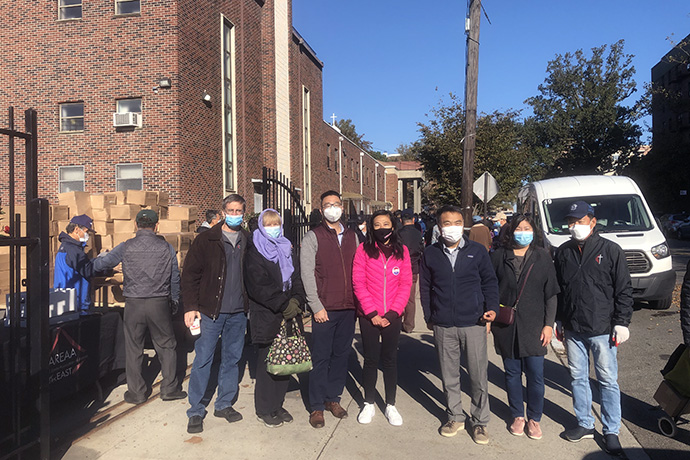 One of the initial critical areas of need identified in many communities was food, said Vencuss.

“Food insecurity quickly became an issue as businesses closed, persons were laid off, schools which provide many children with meals closed, and existing food programs were overwhelmed or in some cases shut down,” he said. “First Flushing saw a need in its community and responded.”

Now, the Food Sharing Ministry runs twice a week, providing food boxes to 250 families with both fresh and shelf-stable food items with sensitivity to the cuisine of different cultures.

U.S. Rep. Grace Meng from the Queens District of New York helped participate in one of the food distribution events by handing out face masks with members of the Asian Real Estate Association.

“This sharing of food by FUMC for our local community in this difficult time is very meaningful and thankful,” she said. “I also came here to participate in this meaningful program.”

Vencuss described the Food Sharing Ministry as part of being an “action church,” demonstrating Christian love in action.

“UMCOR (United Methodist Committee on Relief) has a catch phrase: ‘Be there. Be hope.’ (United Methodist Volunteers in Mission) has, as their motto, ‘Christian love in action.’ Both exemplify the spirit of Christ, both identify what it means to be the church,” he said.

The Rev. James Chongho Kim, pastor of First Church, said he wants to develop the ministry of food sharing even further.

“The economy may be getting worse in 2021,” Kim said. “FUMC is preparing to evolve this ministry into a social empowerment program that supports the self-reliance of single mothers and other socially underprivileged people with the cooperation of various organizations, not just the Food Sharing Ministry.”

Kim is director of Korean and Asian news at United Methodist Communications. Contact him at 615-742-5470 or newsdesk@umcom.org. To read more United Methodist news, subscribe to the free Daily or Weekly Digests.