We believe that boards and agencies of The United Methodist Church should inform delegates about issues before them without directing them how to vote on particular issues.  Though we may each differ in how we would approach the issues of divestment and constructive engagement with certain companies, we all agree to be in respectful conversation with one another about these important issues facing our church and contribute to our mutual understanding of these matters so that we can all best make disciples of Jesus Christ for the transformation of the world.

– New York Conference delegates to the 2016 General and Jurisdictional conferences

Pre-GC2016 video on divestment gets pushback

When does a United Methodist agency go too far in advocating its viewpoint?

That debate flared this week after the United Methodist Board of Pension and Health Benefits released a video urging General Conference delegates to vote “no” on divestment petitions. Such legislation would compel the board to sell stock in certain companies.

The Rev. Jenny Phillips, coordinator of Fossil Free UMC, said the video crossed a line in instructing delegates how to vote. Fossil Free UMC advocates for legislation that would add coal, oil and natural gas to the lists of industries screened from church investments.

She especially objected that the video initially included text that said “DO NOT vote for divestment” and “DO NOT vote to limit investment.”

“This is wrong,” Phillips wrote in a blog. “People perceive the pension board to have significant power, not only because it is a general agency, but also because it manages billions of dollars in church assets and pension funds.”

Barbara Boigegrain, the top executive of the pension board, told United Methodist News Service that the goal was to have a consistent message “that was clear and very short for translation purposes.”

However, the pension board altered the text on the video on Feb. 11 to say “We do not support forced divestment” and “We oppose divestment petitions.” The video’s narration remains entirely the same.

Boigegrain said the agency made the changes to avoid having its text taken out of context. She also said the agency has received both positive and negative feedback to the video, and the video has the support of its board members.

“We felt that the video was a full and fair representation in its full context,” she said, “and delegates have every right to vote their own conscience.”

The pension board released the video on Feb. 5 to be used as the first of five pre-General Conference orientations for central conference delegates got under way in Manila, Philippines. Central conferences are United Methodist regions in Africa, Asia and Europe.

The next orientation is Feb. 12-15 at United Methodist Africa University in Harare, Zimbabwe. Subsequent gatherings will be in Kinshasa, Democratic Republic of the Congo; Abidjan, Côte d’Ivoire; and Samara, Russia.

Multiple petitions seeking divestment from fossil-fuel companies as well as companies at work in the occupied Palestinian territories are going before General Conference, the denomination’s top lawmaking body. The assembly, which brings together 864 delegates from around the globe, will meet May 10-20 in Portland, Oregon.

The denomination has 13 general agencies that provide resources for ministries around the global United Methodist Church. At each General Conference, all typically have legislation they support – and some petitions they would like to see not pass. 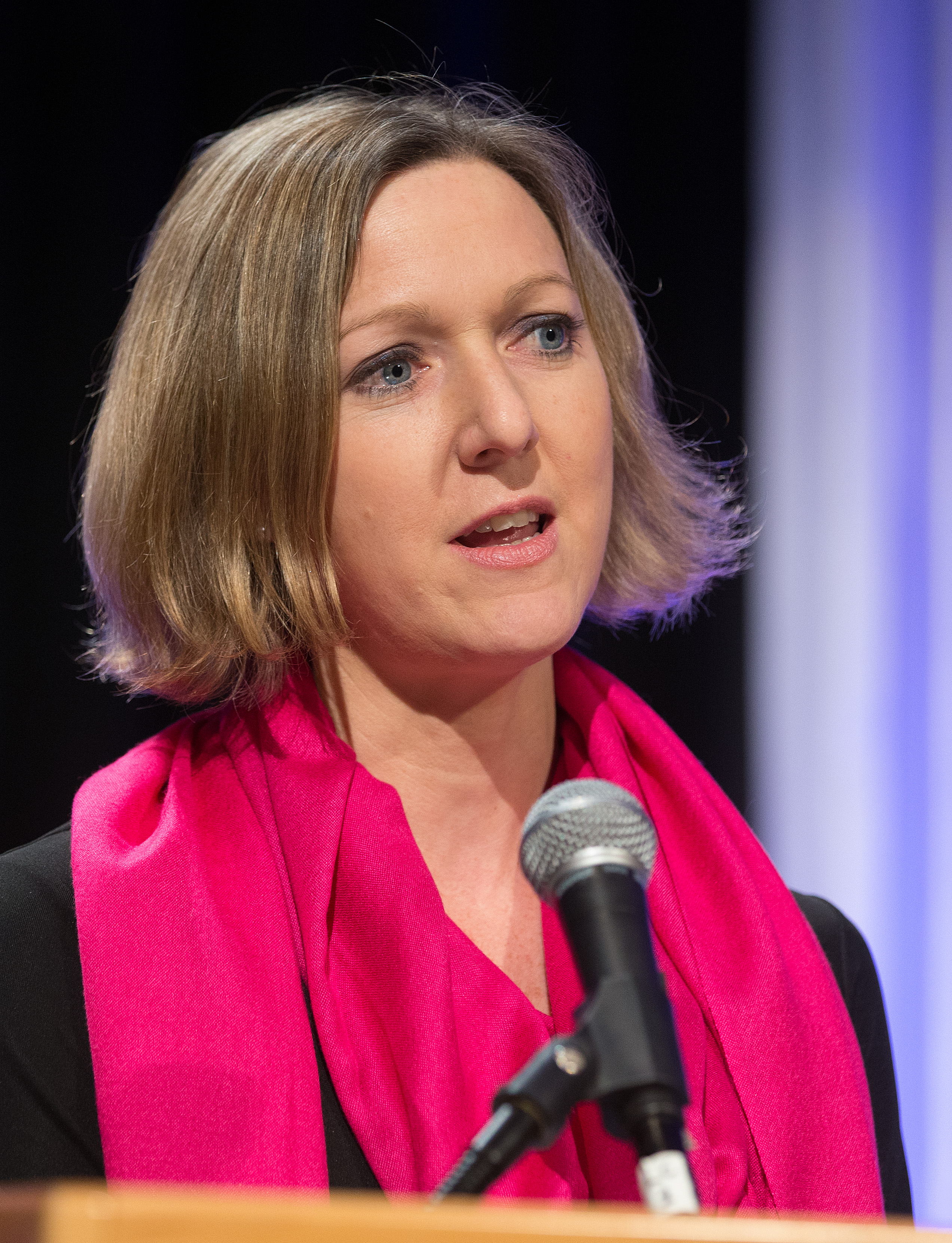 Kirsty Jenkinson of the United Methodist Board of Pension and Health Benefits addresses the pre-General Conference briefing in Portland, Ore. Photo by Mike DuBose, UMNS

The agencies also have varying views on specific pieces of legislation. For example, the United Methodist Board of Church and Society – charged with promoting the denomination’s social teachings – has two petitions asking for divestments related to the Israeli-Palestinian conflict. Church and Society also has given a grant to Fossil Free UMC.

The Rev. L. Fitzgerald “Gere” Reist II, secretary of the General Conference, said, “There is no hard and fast rule” for agency advocacy.

Nevertheless, he echoed Phillips’ misgivings about the pension board’s initial video. “The presentation came across to me as too directive and insufficiently informative,” he said. “I did not experience it as persuasive.”

Reist, who is currently at the Zimbabwe orientation, told UMNS he has not yet seen the revised video. He also said he is not aware of any central conference delegates raising objections to the presentation.

Phillips told UMNS she appreciates that the revised video removes “the most directive language.”

“But I still wonder why they don’t use the same presentation for central conferences as they do in the U.S.,” she said.

The pre-General Conference briefing, held Jan. 20-22 in Portland for mostly U.S. delegates, included a panel discussion on investments and social teachings, as well as a brief time for question and answers. Kirsty Jenkinson, the pension board’s managing director of sustainable investment strategies, was one of the panelists. Among other things, Jenkinson poined to the work her agency has done to persuade ConocoPhillips to set a public goal for decreasing greenhouse gas emissions.

“It wasn’t prescriptive,” Phillips said. “She explained what the board was doing and let that stand for itself.”

Reist said the planning for the briefing and the orientations are different. United Methodist Communications, which includes UMNS, put together the Portland briefing. The Connectional Table, a church leadership body, is the main funding source of the central conference orientations, Reist said. He said those orientations mainly offer agencies time for relationship building and to explain the work they do.

Beyond the dispute about the video is the overarching debate about how much direction General Conference should give to church investments.

The pension board supports benefit plans for more than 92,000 participants and manages about $20 billion in assets. It is the largest faith-based pension fund in the United States.

Last year, the pension board put into play new investment guidelines to exclude certain investments in thermal coal and in companies that operate in countries with “a prolonged and systematic pattern of human rights violations.” Staff members at the time said both guidelines are not only in keeping with church values but also good for participants’ bottom line.

“The General Conference has charged us with the administrative responsibility of investing on behalf of participants,” Boigegrain said.

The agency also is called to make investments with an eye toward the church’s social teachings. However, Boigegrain adds that the board often can be most effective in influencing businesses toward church values if it has a seat at the table.

But, she said, the agency’s main task is carrying out its fiduciary duties in the best interests of participants, and that becomes a lot harder if General Conference picks the stocks.

“Our job is not to be social activists,” Boigegrain said. “Our job is to make sure there are pension benefits for people.”

Phillips said she and other United Methodists believe now is the time to rethink investments in fossil-fuel companies, especially following the historic climate accord in Paris.

“This is the time for The United Methodist Church to step out and say we are not going to profit from this industry any longer,” she said. “We want to stand on the side of people who are suffering the impact of climate change.”

She said her group’s efforts have received support from 11 U.S. conferences; the Virginia Conference’s Board of Church and Society; and the denomination’s mission agency, the United Methodist Board of Global Ministries.

“I have great respect for the people on the staff of the Board of Pension,” she said. “They are working for the greater good, but we have different perspectives on how to get there.”

Ultimately, Reist expects delegates from both the central conferences and United States to draw their own conclusions based on their experiences and values.

“For example, regarding divestment from oil production, I believe that delegates from the Philippines who have experienced increased typhoons and rising waters are more likely to be persuaded by their experiences than by any video,” he said.