• The AMENDing Through Faith Program is working to change harmful attitudes about women.

• Leaders report that it’s hard to get younger men to take part because their lives revolve around the activities of their children.

• The coronavirus pandemic saw an 8.1% increase in domestic violence.

What is a real man?

“Guys should not cry,” Bob Pickett said. “Anger equals strength. Guys who are physically weak aren’t as good as other men. Men should always be able to provide for their family, and a good job proves your masculinity.”

Pickett, who heads the United Methodist Men ministry in the Rappahannock River District in Virginia, is reeling off some assumptions that can lead to trouble in men’s relationships.

Such attitudes can cause misunderstandings and even tragedy. Examining them is part of the AMENDing Through Faith program, developed to combat domestic violence by United Methodist Men and the YWCA of Nashville and Middle Tennessee. It is available nationally.

Domestic violence in the U.S. went up 8.1% after lockdowns were ordered during the height of the coronavirus pandemic, according to the National Commission on COVID-19 and Criminal Justice. It’s feared that the resurgence of the coronavirus could cause that to happen again.

“We want good men that will stand against this construct that it’s acceptable in some way (to belittle or physically strike women),” said Gilbert Hanke, the outgoing top executive of United Methodist Men. “It’s just wrong. It’s not what our faith teaches.”

The AMEND program also points out that youth who witness domestic violence are more likely to attempt suicide, abuse drugs and alcohol, run away from home, become child victims of human trafficking and commit sexual assault crimes themselves. Also, three women die each day at the hands of a man who says he loves her.

AMEND began after Hanke was invited to meet with YWCA officials about six years ago. YWCA leaders said they wanted to address domestic violence with men, who most often are the abusers. Hanke, along with the YWCA, the Rev. Rick Vance (director of the UMM’s Center for Men’s Ministries) and others, pulled together the AMEND program.

“We did a couple of them online, and they worked, but not nearly as well,” Hanke said. “The impact was not as strong with many of the guys as when we did it face to face.”

The program has been done with college students, including a local university basketball team.

“We met with them for eight weeks and at first they said, ‘We don’t do this.’ Then it got to the point somebody said that’s (not true),” Hanke said. “They worked through it, and it was really a positive experience, a life-changing experience.”

Pickett and Nailor both say getting younger men to participate has been difficult. Nailor’s group was all 50-plus, with some nearly 80.

“It’s hard to get young people to get involved in anything outside of their kids,” Pickett said. “That’s both sexes. That’s the focus of our lives.” There’s also the barrier of men’s attitudes in general, because many are reluctant to talk about their feelings or personal things, Nailor said.

Micro-aggressions are also addressed in the program. Those are smaller actions that don’t rise to the level of physical abuse, but are still harmful to women who put up with it.

“It’s more than just physical abuse,” Pickett said. “It’s a challenge when other guys are telling bad jokes or putting people down in some manner.”

Being the guy who vocally objects to something offensive can lead to being labeled as humorless and overly sensitive. Older men in particular have difficulty seeing the harm, sometimes.

“We’re of an age in this church that we grew up under different circumstances,” Nailor said. “‘You throw like a girl,’ those kind of comments, right?

“Gosh, these guys have done that all their lives,” he said. “You don’t think about what you’re causing by that. I think that’s what we're up against, at least in the older generation.”

Feedback from men after experiencing AMEND has been positive, with a lot of men saying they had never given the topic much thought before the class, Nailor said.

“It caused them to think about what they were saying and how they're going about doing things as well as their body reactions,” Nailor said. “Because you send verbal and nonverbal messages as well with your body.”

The statistic that one in five women will be sexually assaulted in college really hit home with men who have daughters, Nailor said.

“But she was fortunate.” 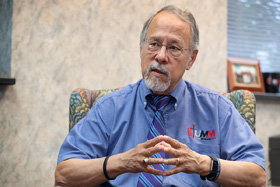 Gilbert C. Hanke speaks during an interview earlier this year in his office at the United Methodist Men agency in Nashville, Tenn. Hanke, along with the YWCA, the Rev. Rick Vance, director of the UMM’s Center for Men’s Ministries, and others, helped create the AMEND program six years ago. Photo by Mike DuBose, UM News.