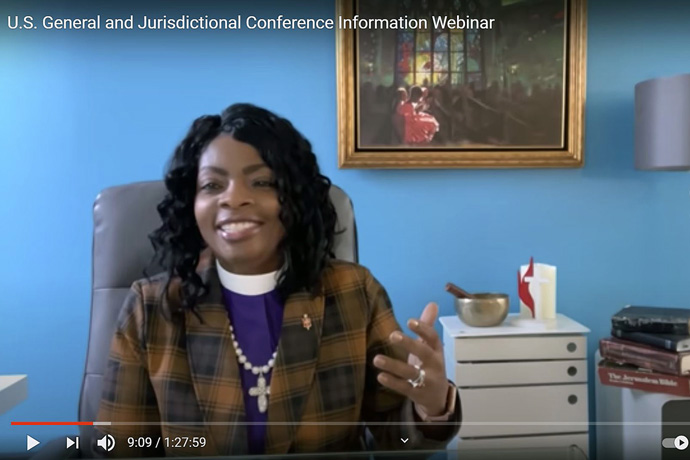 Citing strained finances and denominational uncertainty, United Methodist bishops laid out their case for urging no U.S. bishop elections until 2024. The bishops organized a public webinar on Feb. 13 mainly with the goal of reaching U.S. General Conference and jurisdictional conference delegates — the United Methodists with final say on the number of U.S. bishops.

Some delegates already are pushing back against the recommended delay in all elections — arguing such a move is more drastic than finances warrant and could have theological implications.

Sixteen of 46 active U.S. bishops — more than a third — plan to retire as soon as possible or already have taken on new roles with the Council of Bishops. That 16 includes Bishops Peggy A. Johnson and Elaine J.W. Stanovsky, who recently announced retirement plans. All five jurisdictions have retiring bishops.

"To choose not to elect any bishops is to affirm that God is not calling forth any new people to lead the church this quadrennium," the Northern Illinois Conference delegation said in an open letter, widely circulated before the webinar. "This is a theological statement we are not prepared to make."

However, no one questions that United Methodists face some hard decisions ahead — especially regarding the Episcopal Fund that supports bishops’ work.

"The Episcopal Fund has little wiggle room," Bishop Cynthia Fierro Harvey, president of the Council of Bishops, said during the webinar.

Unlike local churches, the Louisiana Conference bishop explained, the fund has little to no programmatic expenses to cut.

"If we want to reduce the Episcopal Fund, the most significant way — and probably the only place to do so — is by reducing personnel, reducing the number of bishops." The cost for each bishop is about $285,000 a year, including not just salary and benefits but also their pension, housing allowance, travel and office staff.

Harvey acknowledged the fund was in jeopardy even before the COVID-19 pandemic strained economies around the world and offering receipts across the denomination.

In 2019, United Methodist financial leaders warned the Council of Bishops that without changes, the Episcopal Fund would run out of money by 2024. Giving was not keeping pace with the fund’s obligations and the fund was depleting its reserves. 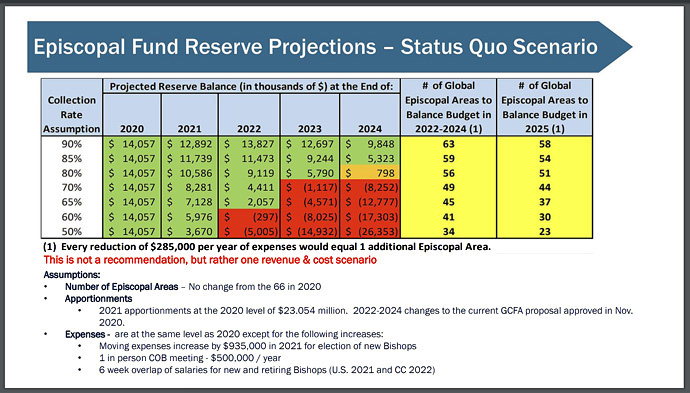 Since then, the bishops formed their own task force to look for ways to move the fund toward sustainability. The bishops’ recommendation for no new bishop electionscame out of the task force’s work.

Complicating matters is that the denomination appears to be on the verge of splitting after decades of intensifying debate over the status of LGBTQ Christians. The coming General Conference faces multiple separation proposals including the Protocol of Reconciliation & Grace Through Separation — a mediated agreement that, if accepted, would allow churches and conferences to break away to form a new, traditionalist denomination.

Harvey stressed the hold on bishop elections would only be an interim move.

"This was not a forever decision," she said, "but a for-now decision until we have a better sense of which churches may choose to disaffiliate and who will remain."

Big questions remain around how many churches, conferences or bishops would leave if the protocol won approval. Under the legislation, it’s possible for a conference to join a new denomination while its bishop remains with The United Methodist Church.

In any case, the General Council on Finance and Administration — the denomination’s finance agency — projects giving to decline significantly in the coming years.

The denomination saw a record amount of giving to general church ministries in December — nearly $39 million. Still, that left the Episcopal Fund with about 86.5% of requested apportionments in 2020 — the lowest collection rate on record for the fund.

"I know we had a great month of December. We praise the Lord for it," Alabama-West Florida Conference Bishop David Graves said during the webinar. "But we also have to continue to look at the big picture."

At present, the denomination has 66 bishops supported by the Episcopal Fund — 46 in the U.S., 13 in Africa, four in Europe and three in the Philippines. The fund also supports bishops’ office staff, travel expenses and their housing allowance.

Most of the fund’s revenue comes from the denomination’s annual conferences, church regional bodies that each pay apportionments — or shares of giving — to support denomination-wide ministries. U.S. conferences provide about 99% of funding for general church ministries.

It remains unclear what a postponement in U.S. bishop elections would mean for how each jurisdiction handles episcopal oversight. Jurisdictions can merge episcopal areas so bishops oversee multiple conferences.

Retired bishops can serve in interim roles, with the Episcopal Fund covering the difference between a bishop’s pension amount and the current salary level. Like other retired bishops, interim bishops have voice but no vote on the Council of Bishops.

Already bishops are discussing how to share duties across conferences, said Western Pennsylvania Conference Bishop Cynthia Moore-Koikoi during the webinar.

Still, some delegates think a drop in 16 active bishops may not be necessary to keep the Episcopal Fund in the black.

Based on modeling from the General Council on Finance and Administration, the Northern Illinois Conference delegation estimates that the U.S. delegates could still elect 10 new bishops. The key, the delegation argues, is that conferences must pay at least 85% of requested apportionments annually.

"The Northern Illinois Conference delegates are inviting all U.S. delegates to find creative ways of proceeding," the Rev. Alka Lyall, the head of the delegation, told United Methodist News. "We strongly believe that the church is at a juncture where we need to add more strong leaders who can help the denomination work through any probabilities, including but not limited to a possible split of the denomination."

David Stotts, delegate and Mississippi Conference treasurer, offered his own ideas for cutting costs in a letter to Southeastern Jurisdiction leaders he shared with UM News. Among his suggestions is to stop the Episcopal Fund’s supplement of housing and have conferences pay housing in full. He also suggested reducing the stipend for office expenses by 50% and having conferences make up the difference.

"I believe people are not looking at the unintended circumstances that may exist with zero elections," Stotts told UM News. But he added that delegates have time for robust discussions.

J.J. Warren, a delegate from the Upper New York Conference, sent an open letter to the bishops urging them to withdraw their recommendation in no small part because it would change the theological balance of the Council of Bishops.

Other delegates think it may be possible to forgo bishop elections for three years.

"This is an interim plan, and I can support that," said Oliver Green, a General Conference delegate from the Great Plains Conference.

The Western Jurisdiction faces the retirement of three of its five bishops.

"Given our massive geographical area in the Western Jurisdiction, which includes Alaska, Hawaii, Guam and Saipan, it is completely impossible to expect two active bishops to provide episcopal leadership to the five episcopal areas in the entire jurisdiction," said the Rev. Kah-Jin Jeffrey Kuan, delegate from the California-Nevada Conference.

However, he said, it’s long overdue for the denomination to reconsider its current system of determining the number of bishops in each jurisdiction based on membership numbers, with no regard for geographic areas.

Fred Brewington, head of the New York Conference delegation, echoed that sentiment. He chaired the Jurisdictional Study Committee that proposed General Conference legislation aimed at getting jurisdictions to focus more on missional priorities in setting the number of bishops. He also presented the committee’s report as part of the webinar.

He said the bishops’ recommendation is well considered but will need flexibility, with each jurisdiction determining for itself whether to hold any elections.

"It’s challenging, but it’s also exciting," he said. "God heard our prayer to rethink church. We just weren’t true to it. And what has God done but forced us to ‘rethink church’ and how we are in ministry with people."

Toward the end of the webinar, Moore-Koikoi of Western Pennsylvania also raised the possibility that some jurisdictions might choose to elect one or two bishops.

To watch or re-watch the General and Jurisdictional Conference Information Webinar, visit this website. People also can view the presentation of the state of general church finances (PDF). During the webinar, Kim Simpson — chair of the Commission on the General Conference — presented an overview of the questions facing the commission in planning the legislative assembly amid a pandemic. She delivered much the same update at an earlier meeting. You can read about it here.

Which U.S. Bishops are Retiring?


Hahn is assistant news editor for UM News. Contact her at (615) 742-5470 or newsdesk@umcom.org. To read more United Methodist news, subscribe to the free Daily or Weekly Digests.