Shillady to Pray at DNC After Clinton's Acceptance Speech

Shillady to Pray at DNC After Clinton's Acceptance Speech 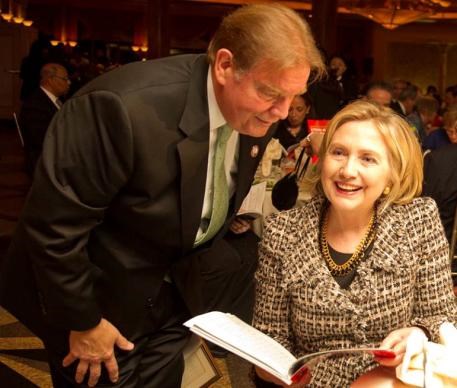 The advance text of Shillady's benediction and two videos can be found here.

BY JOANNE S. UTLEY
Editor, The Vision
The Reverend Dr. William S. Shillady will offer the benediction at the Democratic National Convention in Philadelphia following Hillary Clinton’s acceptance speech tomorrow night. Shillady, an elder in the New York Annual Conference, is the executive director of the United Methodist City Society.

Shillady, who admitted to being nervous about his role in this historic moment, said it was “a fantastic honor to be asked by the Democratic nominee for president to pray for her and our nation following her acceptance speech.  I am blessed and humbled to be a part of the Clinton family's spiritual journey."

He said that the prayer, which is a little more than two minutes long, would definitely include some “Methodist phraseology.” Shillady said he planned to stress the need for the American public to reach out in love and respect to all people. He’ll get some rehearsal time on the stage tomorrow afternoon, but is uncertain whether he’ll have an opportunity to see the candidate herself. Chelsea Clinton will be introducing her mother, who is expected to speak at approximately 11 p.m.

Clinton, a lifelong Methodist who speaks openly about the influence the church had on her family and life, credits her youth pastor in Park Ridge, Ill., with teaching her to embrace faith in action. She has also said that it was her grandmother, Hannah, “a tough Methodist woman” who taught her to never be afraid to get your hands dirty.

For the past 16 months, Shillady and team of mostly UMC clergy have been writing and emailing daily devotions to the presidential candidate. On April 5, 2015 – Easter Sunday ­– Shillady, New York Conference Bishop Jane Allen Middleton and her husband, Jack, had brunch with the Clinton family. When Hillary revealed to the group that she would be running for president, Shillady offered his help. That support came in the form of daily devotions, an idea inspired by the writings of Josh DuBois for President Barack Obama.

“We don’t get a daily response to what we send, but she has responded and has mentioned the devotions in a number of her town hall meetings across the country,” Shillady said.

Shillady’s pastoral relationship with the Clinton family has spanned nearly 15 years. He first met then-Senator Clinton at a 9-11 remembrance service in New York City while he was serving as senior pastor of the Park Avenue UMC. Clinton soon brought her daughter, Chelsea, to worship at the Upper East Side church, and the younger Clinton continued to worship there occasionally.

According to a United Methodist News Service story, the Sunday after Hillary Clinton announced her first run for the presidency in January 2007, Hillary, Chelsea and Bill Clinton all attended at Park Avenue. After departing the White House in 2000 and buying a home in Chappaqua, N.Y., the Clintons have been known to attend Mt. Kisco UMC.

Clinton was also the keynote speaker for a gathering of almost 700 people in November 2013 when Shillady led the City Society in celebrating its “175 Years of Mission in the City.”

The devotional writing team that has worked with Shillady includes: