Speaking up after Orlando shootings

Speaking up after Orlando shootings 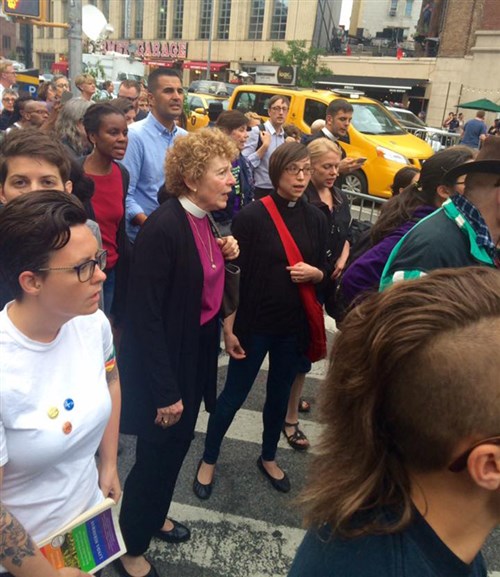 NYAC Bishop Jane Allen Middleton, center,  joins in a march from The Church of The Village (COTV) to the Stonewall Inn on June 13 in a stand against hatred and bigotry prompted by the mass killings at a gay club in Orlando. Rev. Vicki Flippin marches alongside the bishop. The march followed a worship service at COTV.

BY LINDA BLOOM AND SAM HODGES
UMNS / With local reporting

In the aftermath of the worst mass shooting incident in U.S. history, church leaders say United Methodists must speak up about the contributing factors – bigotry, hatred and the availability of military-style guns.

“I hope United Methodists will see this as an opportunity to speak up and speak on behalf of what is at the core of our DNA – love God and love neighbor,” Bishop Bruce Ough, president of the United Methodist Council of Bishops, told United Methodist News Service. “Wesley was pretty clear that that’s the mark of who we are.”

A gunman killed 49 people and injured 53 early on June 12 when he opened fire at the Pulse, a gay nightclub in Orlando, Florida. Police killed the gunman. “Crimes of hate that terrorize any of God’s children are abhorrent and intolerable,” said the United Methodist Board of Church and Society in a statement. “This time it is against LGBTQ persons and communities.”

United Methodists in the Orlando area assisted with blood donations and began reaching out to the LGBTQ community after the tragedy. In a statement, Florida Area Bishop Kenneth Carter Jr. expressed his hope that “we can discover creative, pastoral and grace-filled ways to bear witness to all — including lesbian, gay, bisexual and transgender persons — that together we are God's beloved children.”

On the day after the shootings, Rev. Lea Matthews, director of ministry operations for the United Methodist Church of St. Paul and St. Andrew in New York, was helping organize a worship service among several congregations for that evening.

Matthews, who was among those signing a recent open letter to the denomination about being gay, admitted to “spiritual whiplash” – feeling exhilarated after being commissioned as a provisional deacon June 11 by the New York Conference and then devastated by nightclub shootings the next day.

The targeted attacks, she said, imply the LGBTQ community should be afraid. “Collectively, we are refusing to feel that way.”

She hoped the 6 p.m. EDT service at the United Methodist Church of the Village, which will include Bishop Jane Allen Middleton, would offer “a visible witness” that such hatred is not a part of the church. Middleton released a statement urging renewed prayers for an end to such violence.

The worship service also “will not stand against Muslims as perpetrators of evil because they are not,” Matthews said.

President Barack Obama said the attack in Orlando appears to be homegrown extremism that was carried out by a killer using legally purchased firearms.

The Rev. Susan Henry-Crowe, Church and Society’s top executive, said she sees a lot of good will and support for Muslims, but worries about “the hate rhetoric that allows for violence.”

Her agency is planning an interfaith service of solidarity for all who died or were wounded at 12:10 p.m. EDT on June 15 at the United Methodist building in Washington.

In May, the United Methodist General Conference, the denomination’s top legislative body, approved “Our Call to End Gun Violence” legislation that advocates for universal background checks on all gun purchases and a ban on large-capacity ammunition magazines and weapons designed to fire multiple rounds.

That description applies to the legally obtained guns used by the Orlando shooter.

Church and Society, along with bishops and pastors, has a responsibility to engage in education and advocacy on gun control, Henry-Crowe explained, to help people “understand what the devastating implications are when there are not these kinds of controls on weapons that have no use on the streets.”

Addressing gun violence “must be a priority for our leaders at every level of government. Doing nothing is to be complicit in the continued murder of innocent people,” the board’s statement on the Orlando shootings said.

Is the church complicit?

Reconciling Ministries Network, an unofficial gay rights advocacy group within the denomination, issued a statement saying that The United Methodist Church is, through its teachings on human sexuality, complicit in violence against gay people.

“This complicity is rooted not only in the clear prejudice of the proclamation that ?homosexuality is incompatible with Christian teaching,’ but also in the inability of the largest mainline Protestant denomination to say anything meaningful that would disrupt the lie that LGBTQ people are any less valuable than any other children of God,” the statement said.

Bishop Minerva Carcaño, of the California-Pacific Conference and was the NYAC ordination preacher, also questioned whether current United Methodist policies contribute to an atmosphere in which violence occurs.

“We cannot just stand by and allow what happened in Orlando, Florida, to go without our deep and prayerful reflection and our repentance and conversion wherever that is necessary in the life of our Church,” she said in a statement.

For Ann Craig, co-spokesperson of Affirmation, the oldest LGBTQ group in the denomination, “It’s not an accident” that LGBTQ people were targeted. From a religious perspective, she said, the violence in Orlando is “directly related” to “very selective and very judgmental” scriptural literalism, whether Islamic or Christian.

“When are the United Methodists going to start speaking out?” she asked. “The silence is deafening.”

Ough, as president of the Council of Bishops, did address the Orlando massacre in a statement.

“We are in shock,” Ough said. “We join those who grieve. We pray for the victims, their families and the LGBTQ community targeted by this hateful attack. We stand against all forms of violence, committed anywhere in the world by anyone. We stand with our Muslim brothers and sisters who have condemned this heinous act. We pledge to work together to overcome evil with good, terrorism with peace, hatred with love, and inequity with justice.”

Ough was asked in a phone interview about the Reconciling Ministries Network’s claim of complicity.

“It’s a bit of an overreach to say that somehow The United Methodist Church has been complicit if you understand that to be an ?accomplice,’ which is the technical definition,” Ough said. “But I certainly understand the pain and frustration, and I believe much of the pain and frustration is heightened when The United Methodist Church falls silent or appears to be compliant in some way with the narrative that seems to be going on in our country.”

Ough added: “There’s a narrative of violence and fear and anger and bigotry that appears to be resonating with a large number of people in our country right now. I think it does create a certain atmosphere."

Being a better ally

The Rev. Ben Gosden, a United Methodist pastor in Savannah, Georgia, attended a vigil in his city June 12 on behalf of the Orlando victims.

While Gosden does not accept the “complicit” charge against The United Methodist Church, he said the Orlando tragedy had caused him to commit to becoming a better United Methodist ally of LGBTQ people. He also said he learned at the vigil that gay clubs are a place where people who often have been rejected by their families find acceptance and community. For that reason, many in the gay community consider these clubs sacred.

“What really breaks my heart is that the club has become a place of community and not the church,” Gosden said.

Good News, an unofficial evangelical advocacy group in The United Methodist Church that favors upholding the church’s teachings on homosexuality, released a statement saying that United Methodists of differing theological viewpoints should unite in responding to the Orlando massacre.

"As Christians we must work together to conteract hatred and violence directed at LGBTQ people. May the Holy Spirit guide our thoughts and prayers and empower our actions over the coming days," the Good News statement said.

Bloom and Hodges may be contacted through the United Methodist News Service at (615)742-5470 or newsdesk@umcom.org.