Ukrainians may be Moved From Russian Bishop's Area

Ukrainians may be Moved From Russian Bishop's Area

Can a Russian bishop effectively oversee Ukrainian United Methodists, given the recent Russian invasion of Ukraine and hostilities between the countries that go back years?

Some key European United Methodists believe the answer is “no” and have taken steps to move the Ukrainian-Moldova Provisional Annual Conference from the area supervised by Moscow-based Bishop Eduard Khegay.

But Khegay has expressed his “deepest disappointment” in the effort — and has used stronger language to question the motives of those involved. 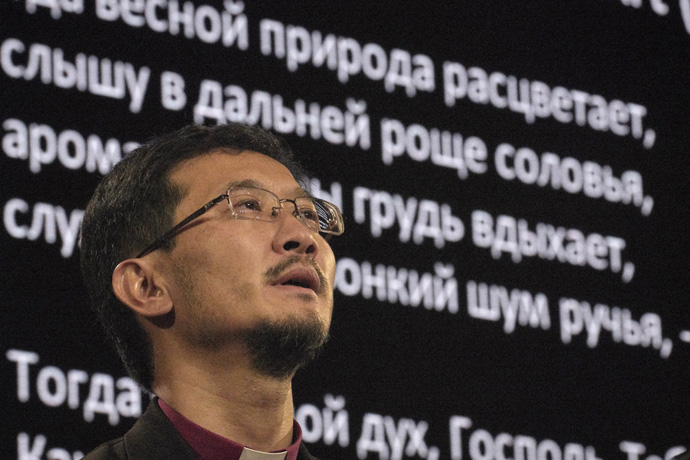 Bishop Eduard Khegay speaks to the opening session of the 2019 Special Session of the General Conference of The United Methodist Church. File photo by Paul Jeffrey, UM News.

Relations between Ukraine and Russia have long been strained, and Ukrainian United Methodists have sought since 2020 to move from under Khegay’s supervision.

The Ukrainians say they began to operate more or less on their own after voting that year to distance themselves from their Russian bishop. But they did not succeed in getting officially moved to another episcopal area.

Then came the Russia’s invasion of Ukraine on Feb. 24 of this year.

Exactly one month later, the Northern Europe and Eurasia Central Conference Council approved a resolution declaring that it is “impossible for both emotional and practical reasons for a Russian bishop to give relevant care and spiritual leadership (to Ukrainians) under the circumstances.”

Bishop Christian Alsted has called an April 30 extra session of the Northern Europe and Eurasia Central Conference to consider the council’s request that the Ukraine-Moldova Provisional Annual Conference be temporarily moved from Khegay’s Eurasia Episcopal Area to the Nordic and Baltic Episcopal Area, which Alsted leads. 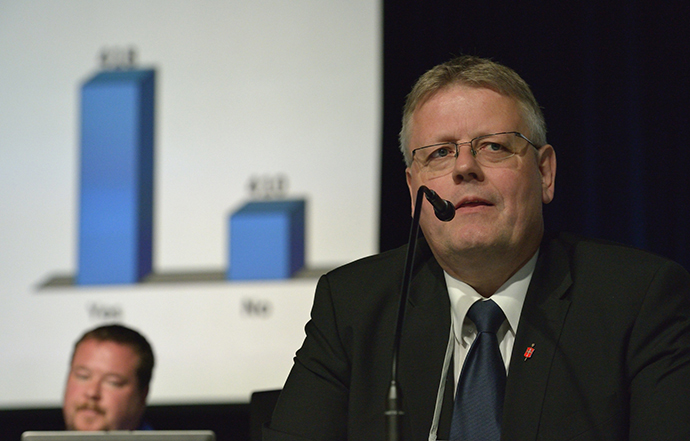 United Methodist Bishop Christian Alsted of the Nordic and Baltic Area presides over a May 11 session of the 2016 United Methodist General Conference in Portland, Ore. File photo by Paul Jeffrey, UM News.

Khegay has won points for bravery with many United Methodists, given his public criticism of his country’s invasion of Ukraine.

But he is also outspokenly critical of the effort to move the Ukraine-Moldova Conference, suggesting it’s a territorial grab and more about politics than Christian consensus-building.

But the Rev. Ole Birch, secretary of the Northern Europe and Eurasia Central Conference Council, said escalating conflict between Russia and Ukraine, and the related desire of Ukrainian United Methodists for a change in episcopal supervision, prompted the council to act — nothing more.

“Sadly, the Russian Bishop Eduard Khegay does not recognize this and is unwilling to let go of this part of his episcopal area,” Birch said by email.

Though European conferences can be large geographically, they are small in membership, and the Ukraine-Moldova Provisional Annual Conference had under 400 members in 2017, according to the denomination’s General Council on Finance and Administration.

Ukraine and Russia share a border and have a complex, intertwined history. Russia’s 2014 move to annex Crimea within Ukraine ignited ongoing armed conflict between the countries, played out mostly in eastern Ukraine.

“All pastors asked me one question: Why is our Ukrainian United Methodist Church under the ruling of Moscow?” he said in a Zoom interview.

In June 2020, members of the Ukraine-Moldova Conference met in their annual session and voted 16-0 for withdrawing from the Eurasia Episcopal Area, according to an extract of the meeting’s minutes.

Starodubets said requests to get United Methodist leaders to move the conference to another episcopal area essentially went unanswered until Russia’s invasion of Ukraine.

But on March 24, the Northern Europe and Eurasia Central Conference Council approved by a more than two-thirds margin a resolution asking bishops to call an extra session of the central conference, solely to consider temporarily moving Ukraine-Moldova to the Nordic and Baltic Area.

The resolution emphasized the Ukrainian United Methodists’ desire to change episcopal areas, but also the state of armed conflict between Russia and Ukraine since 2014 and the devastation Ukraine has experienced since Russia’s invasion earlier this year.

“The local churches of The United Methodist Church in Ukraine are in dire need of leadership as they struggle to be in ministry with the (Ukrainian) refugees,” the resolution says.

The request for an extra session was made under Paragraph 542.2 of the United Methodist Book of Discipline. It reads in part: “The bishops resident in a central conference or a majority of them, with the concurrence of the executive committee or other authorized committee, shall have the authority to call an extra session of the central conference to be held at the time and place designated by them.”

Khegay, in his letter to the Northern Europe and Eurasia Central Conference, blasted the council majority for seeking to move Ukraine-Moldova.

“While so many Methodists in Russia and Ukraine experience pain (at) the conflict between our countries, while we try to carefully build small bridges of unity and reconciliation, while we learn how to love and forgive in the midst of war, Nordic and Baltic members of the Central Conference Council decide to build (an) iron curtain between us,” he wrote.

In an email interview, Khegay said, “I am disappointed how the Nordic and Baltic members of the Central Conference Council have orchestrated this, ignoring voices from Eurasia members. It was obvious to me that they decided everything before the meeting.”

He said that after the Ukraine-Moldova Conference took its 2020 vote, the council informed the Ukrainians of the processes for requesting a move to another episcopal area or to another central conference.

The council also in writing affirmed Khegay’s episcopal supervision and took no steps to initiate a change in the supervision of Ukraine-Moldova, Alsted said.

“It is my understanding that Russia’s invasion of Ukraine has changed the council’s understanding and of the need to initiate a change, which is reflected in their action and in the rationale of their motion,” Alsted said.

Khegay was asked by UM News if he felt he could provide effective leadership to Ukrainian United Methodists, given Russia’s invasion of Ukraine.

“I am doing my best given the complexity of the situation,” he said. “The risk for some Ukrainian pastors is that if they are too friendly to me, they would be under fire by their own nationalist members or Oleg Starodubets.”

Khegay said Starodubets “fueled nationalist ideas among Ukrainian pastors” ahead of the 2020 vote by the Ukraine-Moldova Conference.

Starodubets disputed that, underscoring that the vote was unanimous. He said his ministry in Ukraine has been deliberately international, not nationalist — welcoming African immigrants and people from other continents and countries.

He also noted that these days he and his wife, the Rev. Yulia Starodubets, are working long hours to provide care for persons internally displaced by the Russian invasion.

The April 30 extra session of the Northern Europe and Eurasia Central Conference is to be held online, with 64 clergy and laypersons participating from the various annual conferences.

Alsted said he believes the resolution to move Ukraine-Moldova can, under Paragraph 543.5 of the Book of Discipline, pass with a simple majority vote.

The next regular session of the Northern Europe and Eurasia Central Conference will be in the spring of 2025 — place and date yet to be determined, Alsted said.