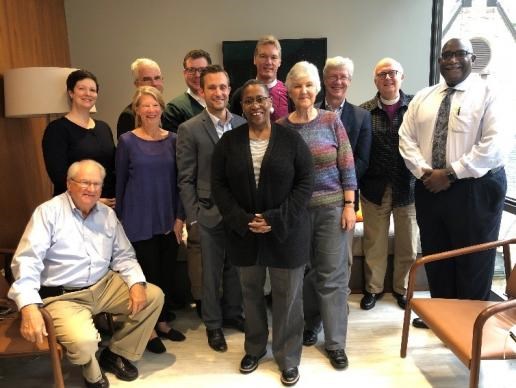 CHICAGO - The United Methodist-Episcopal dialogue committee held a meeting recently to continue its conversations about a proposal for full communion between these churches entitled “A Gift to the World: Co-Laborers for the Healing of Brokenness.” The committee met at the Nicholas Center of St. James Cathedral in downtown Chicago on October 1-2, 2018.

After receiving reports on the proposal from The United Methodist Committee on Faith and Order and the Inter-Anglican Standing Commission on Unity, Faith, and Order (IASCUFO), members of the committee discussed and implemented a final round of edits to “A Gift to the World” in response to input from these bodies and other public conversations surrounding the document.

The document is now in its definitive form and will be going before The Council of Bishops of The United Methodist Church for preliminary action the first week of November 2018. The updated document can be found online.

The timeline calls for the proposal to be acted upon by The United Methodist General Conference in 2020, and the General Convention of The Episcopal Church in 2021. Before consideration by the churches’ respective assemblies, the document will be translated into Spanish, French, Portuguese, and Kiswahili—official working languages in which the proposal will be reviewed.

In addition to finalizing the text of the proposal against a background of common worship and fellowship, the dialogue committee continued making plans to gather local groups of United Methodists and Episcopalians to discuss shared mission and the prospect of full communion. The committee encourages neighboring local churches, area clergy and lay leaders, diocesan convention and Annual Conference leadership and staff, and other appropriate groups to gather to build relationships, learn, discuss the proposal, and cast a vision for shared mission into the future as our churches continue to work towards unity.

The committee also called for continued prayers for the United Methodist Church’s Special General Conference February 23-26, 2019 in Saint Louis which will be deliberating the denomination’s coming direction regarding human sexuality.